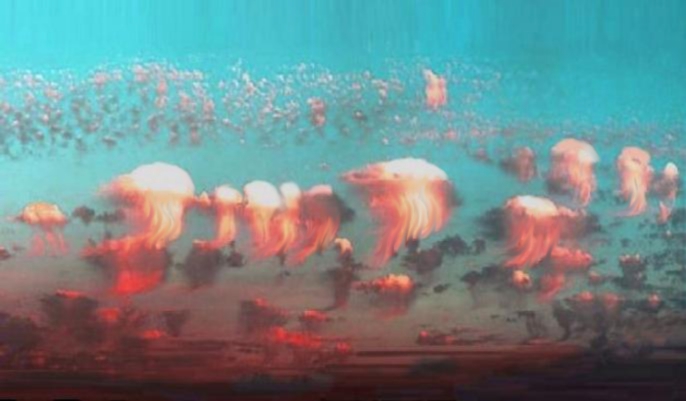 As anyone who has visited this blog in the past is likely aware, I’m a fan of alternative theories. Usually the more out there, the better! With this in mind I want to take a look at the old-fashioned (out-dated?) concept of Atmospheric Lifeforms. That is, actual living entities which make their home far above the ground high up in the atmosphere.

At first blush this idea sounds a bit preposterous, but let’s look into the history of the concept a bit and reserve judgement until a little later.

In Unexplained! Jerome Clark repeats a story which originally appeared in the Indianapolis Journal. The story is as follows; September 5, 1891 at around 2 o’clock in the morning, two men were hitching up a wagon when they sighted a “horrible apparition”. Clark continues:

One hundred feet in the air, twenty feet long and eight feet wide, the headless, oblong thing – apparently some bizarre variety of living creature – propelled itself with several pairs of fins and circled a nearby house.

They were not, however, the only witnesses. A Methodist pastor, the Rev. G. W. Switzer, and his wife also observed the phenomenon.

Clark notes that this creature hadn’t tired of harassing Crawfordsville quite yet. Continuing Clark relates:

The creature was back the following evening, and this time hundreds of Crawfordsville’s citizens saw its violently flapping fins and flaming red “eye”. The creature “squirmed as if in agony” and made a “wheezing, plaintive sound” as it hovered at 300 feet. At one point it swooped over a band of onlookers, who swore they felt its “hot breath”.

The legend himself, Charles Fort, also wrote about this account. One of the things I admire about Fort is that he never takes things at face value and is always questioning events. In this case Fort notes that when he happened upon this story he

Fort would later find that Switzer was real, was still alive at the time Fort was collecting these accounts, and confirmed that he had actually seen the monster. Later a Crawfordsville reporter, and member of the Fortean Society, named Vincent Gaddis interviewed some older residents of the town in 1946. According to Clark, Gaddis wrote, “ All the reports refer to this object as a living thing”. For the witness of this ‘monster’, it was an actual living creature of some kind. Clearly one that was, and is, unknown to science.

Unlike other more elusive crypto animals, these atmospheric lifeforms have reportedly left behind some traces of their existence. However, very much like other things in the paranormal, this potential proof is as ephemeral as the creatures themselves.

Clark relates another story in Unexplained! about a reported “carcass” of one of these atmospheric lifeforms. He notes:

One such incident occurred in Philadelphia on September 26, 1950, when two police officers saw what they thought was a UFO land in  a field. When they and two other officers investigated, they found a six-foot-long gelatinous mass that evaporated within half an hour.

Hopefully you’re not eating while reading this post, that stuff looks pretty gross! Star Jelly, or as it is sometimes known pwdr ser, is a gelatinous substance which sometimes found on grass or trees. The traditional explanation is that it is deposited to the earth during meteor showers, perhaps it is the remains of these atmospheric lfeforms? Or is it as simple as science says; this jelly is the by-product of cyanobacteria?

Aviation and military historian, Trevor James Constable is an early UFO writer who was one of the first to theorize that UFOs may actually be what he called “critters”. In Constable’s way of thinking these creatures operated on Orgone energy.  Orgone being the ‘life force’ which all living beings have which was proposed by Wilhelm Reich. Constable wrote a book in 1975 outlining his theories on these entities which was entitled The Cosmic Pulse of Life.

Constable is an interesting character who has seemingly done more research into Reich’s Weather Manipulation concepts through orgone, but that’s all a bit outside the scope of this post. You should check out his site linked above for more info on all that.

Science weighs in or towards a conclusion?

The above photo is of a an organism called diatom, which is a single celled algae. This algae was discovered making it’s home about 16 miles up in the atmosphere by Researchers from the University of Sheffield and Buckingham University. The Telegraph relates the following:

Researchers from the University of Sheffield and Buckingham University claim to have found evidence for microscopic organisms living 16 miles up in the atmosphere between Chester and Wakefield.

The scientists used a specially designed balloon to gather samples in the stratosphere during the recent Perseid meteor shower.

They found the fragments of single celled algae known as a diatom.

They argue that this could be the first evidence to show how life may have arrived on Earth from space, perhaps carried here by meteorites.

It is not the first time organisms have been found in the atmosphere and indeed the skies are thought to be teeming with microscopic life.

Though it’s not quite as fantastic as the Crawfordsville Monster, we do seem to have evidence that microscopic life is making its home high up in the atmosphere. Could there potentially be macroscopic life living up there? Could these creatures explain some UFO sightings? After all, UFOs are said to operate unlike conventional aircraft. Could that be explained because they aren’t aircraft at all? Quite possibly. If nothing else, it makes for an interesting thought experiment. 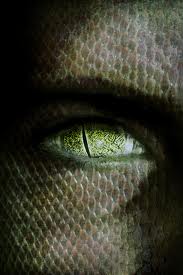 A Canadian group has listed the story below on their Facebook page and some of the comments made me wonder if this is a... 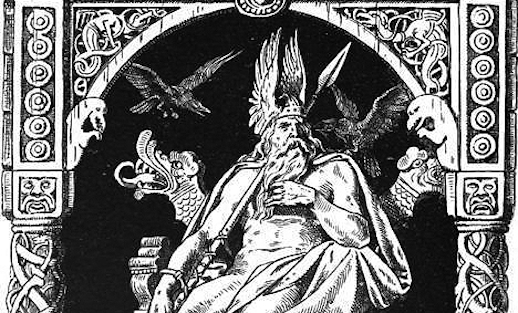 The Odic Force: An Early Scientific Case for “Sensitives”

The belief that a mysterious “life force” exists within all living beings has been a persistent motif in cultures throughout the world. Eastern energy...