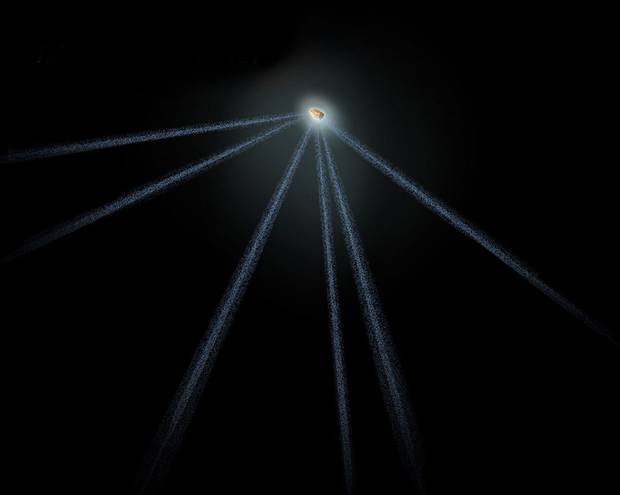 Nasa astronomers have announced the discovery of a “weird and freakish object” by the Hubble telescope – the first ever six-tailed asteroid, found spinning through space between the orbits of Mars and Jupiter.

“We were literally dumbfounded when we saw it,” said David Jewitt, lead investigator on the project and professor at the University of California. “Even more amazing, its tail structures change dramatically in just 13 days as it belches out dust. That also caught us by surprise. It’s hard to believe we’re looking at an asteroid.”

Whilst comets are well-known for their tails -trails of vaporized dust and water, thrown off from the ice-coated objects as they pass through solar winds – rocky-bodied asteroids do not produce any trace and previously only been spotted as single points of light.

Although the astronomers do not have a clear answer of why the object, designated P/2013 P5, has six-tails, they have speculated that its rate of rotation may have reached the point where it starts disintegrating.

What could have caused P/2013 P5 to begin spinning so violently is also unknown. Impact with another asteroid has been ruled out, as this event would have created a large amount of dust from the impact.

It was first spotted as “unusually fuzzy-looking object” by the Pan-STARRS survey telescope in Hawaii and on further investigation its multiple tails were identified by images from the Hubble space telescope on 10 September.

However, when Hubble took a second look on 23 September they found its appearance had changed. “We were completely knocked out,” said Jewitt. 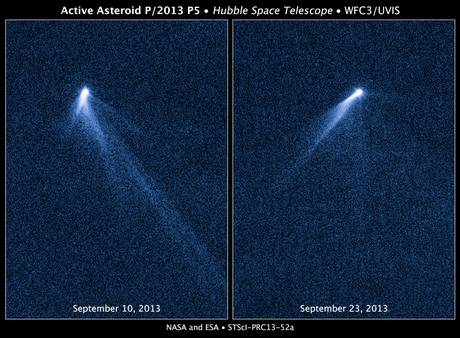 Images from the Hubble telescope on the 10th and 23rd of September, showing how the tails of the asteroid have spun “like a rotating lawn sprinkler.” Image credit: Hubble.

Computer modelling of the asteroid by Jessica Agarwal of the Max Planck Institute for Solar System Research in Germany suggested that the tails could have been created by a series of ‘dust-ejection events’.

Approximately 100 to 1,000 tonnes of dust have been lost from the asteroid via these tails, though the main body of the object is estimated to be many thousand times more massive than this, measuring around 1,400 feet across.

Jewitt and Agarwal have hypothesised that the unusual asteroid might be the first sighting of a ‘dying’ asteroid, suggesting that its rotational force will continual to tear away at its bulk until it is too small to be considered an asteroid.

“This is just an amazing object to us, and almost certainly the first of many more to come,” said Jewitt. “In astronomy, where you find one, you eventually find a whole bunch more.”

In this article:Hubble telescope, ‘dying’ asteroid