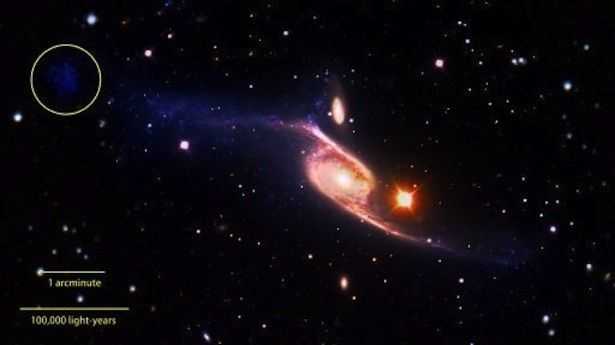 Astronomers on Friday said they had observed the largest structure yet seen in the cosmos, a cluster of galaxies from the early Universe that spans an astonishing four billion light years.
The sprawling structure is known as a large quasar group (LQG), in which quasars – the nuclei of ancient galaxies, powered by supermassive black holes – clump together.
The discovery in the deep Universe was made by a team led by Roger Clowes at the Jeremiah HorrocksInstitute at Britain’s University of Central Lancashire.

It would take a spaceship travelling at the speed of light four thousand million years to get from one end of the cluster to the other.
To give a sense of scale, our galaxy (the Milky Way) is separated from its nearest neighbour, the Andromeda galaxy, by two and a half million light years.
“While it is difficult to fathom the scale of this LQG, we can say quite definitely it is the largest structure ever seen in the entire Universe,” Clowes said in a press statement issued by Britain’s Royal Astronomical Society (RAS).
“This is hugely exciting, not least because it runs counter to our current understanding of the scale of the Universe.”
The paper appears in a RAS journal, Monthly Notices of the Royal Astronomical Society.