An international team of astronomers has detected the most distant galaxy yet.

The galaxy is about 30 billion light-years away and is helping scientists shed light on the period that immediately followed the Big Bang.

It was found using the Hubble Space Telescope and its distance was then confirmed with the ground-based Keck Observatory in Hawaii.

The study is published in the journal Nature.

Because it takes light so long to travel from the outer edge of the Universe to us, the galaxy appears as it was 13.1 billion years ago (its distance from Earth of 30 billion light-years is because the Universe is expanding).

Lead researcher Steven Finkelstein, from the University of Texas at Austin, US, said: “This is the most distant galaxy we’ve confirmed. We are seeing this galaxy as it was 700 million years after the Big Bang.”

Astronomers were able to measure how far it was from Earth by analysing its colour.

Because the Universe is expanding and everything is moving away from us, light waves are stretched. This makes objects look redder than they actually are.

Astronomers rate this apparent colour-change on a scale that is called redshift.

This makes it the most distant galaxy ever found. 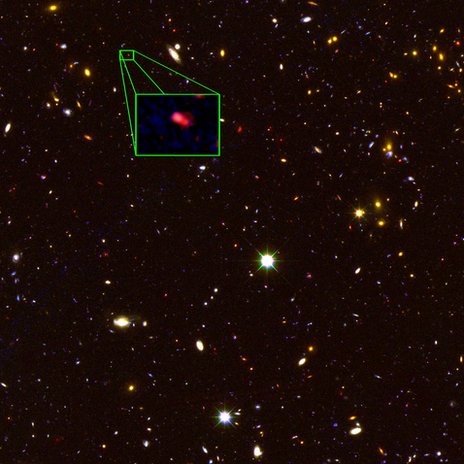 z8_GND_5296 is churning out stars at a remarkable rate, say astronomers

The system is small: about 1-2% the mass of the Milky Way and is rich in heavier elements.

But it has a surprising feature: it is turning gas and dust into new stars at a remarkable rate, churning them out hundreds of times faster than our own galaxy can.

It is the second far-flung galaxy known that has been found to have a high star-production rate.

Prof Finkelstein said: “One very interesting way to learn about the Universe is to study these outliers and that tells us something about what sort of physical processes are dominating galaxy formation and galaxy evolution.

“What was great about this galaxy is not only is it so distant, it is also pretty exceptional.”

He added that in the coming years, astronomers are likely to discover even more distant galaxies when Nasa’s James Webb Space Telescope (JWST) is launched and other ground-based telescopes come online.

Commenting on the research, Dr Marek Kukula, Public Astronomer at the Royal Observatory Greenwich, told BBC News: “This, along with some other evidence, shows that there are already quite surprisingly evolved galaxies in the very early Universe .

“This high star-formation rate maybe is a clue as to why these galaxies can form so quickly.”

Prof Alfonso Aragon-Salamanca, from the University of Nottingham, added: “This is an important step forward, but we need to continue looking for more.

“The further away we go, the closer we will get to discovering the very first stars that ever formed in the Universe. The next generation of telescopes will make this possible.”

But Dr Stephen Serjeant from the Open University said: “Chasing ultra-high redshift galaxies is a very exciting but equally very difficult game, and many claims of extremely distant galaxies have since turned out to be more nearby interlopers.”