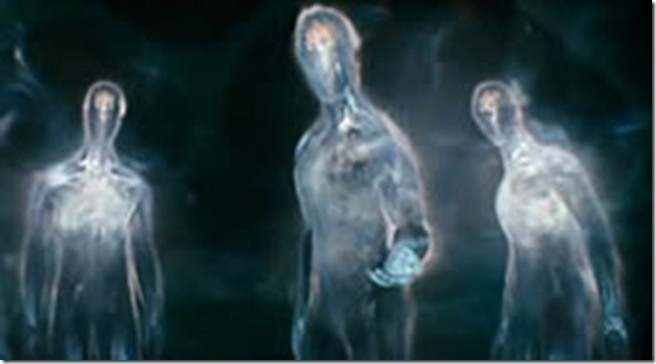 It was the 155th day of a Russian space flight, in July 1984, when the cosmonauts on the Soviet space station, Salyut 7, reported strange lights and beings. Commander Oleg Atkov and cosmonauts Vladmir Solovyov and Leonid Kizim reported to ground control that the space station was completely surrounded and bathed in a spectacular orange light. It seemed that the light entered  from outside, from space, and came through an absolutely opaque wall.

For a short time, the light was so brilliant it blinded the astronauts. Not knowing what happened, when their vision returned, each of them looked out the spacecraft windows for the cause of the blinding light.   They scanned the craft looking for some type of explosion or fire, as the Salyut 7 had suffered previous fires, but what the cosmonauts saw was more incomprehensible than the orange light. 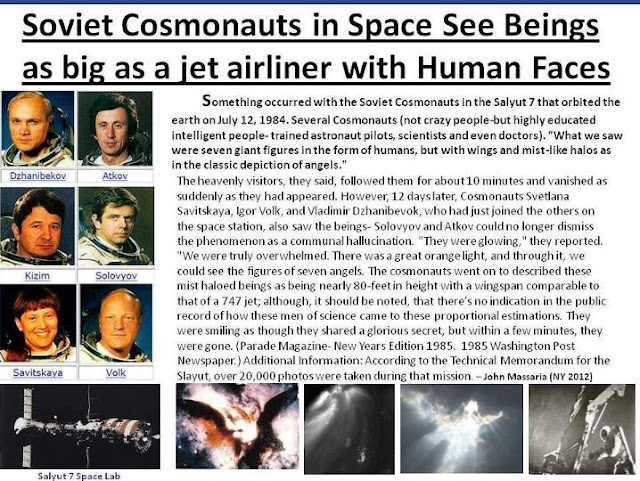 Incredibly they reported seeing the faces of seven angels who were hovering just outside the space station. They told ground control their faces and bodies looked human but these beings had wings and misty-like halos. The angels kept up with the movement and speed of the space station for 10 minutes before disappearing as quickly as they had come. Being logical, the cosmonauts talked this matter over among themselves and agreed that because they had been in space for so long, they were probably were suffering from the stress of long term space travel and were more than likely having some kind of group hallucination. The cosmonauts  reassured themselves that  they had gone temporarily insane and had experienced  a group hallucination that was the only sensible explanation of what happened.

After spending another 11 days on the space station, on day 167, the crew was then joined by three more of their colleagues from the Soyuz T-12 space craft, Svetlana Savitskaya, Igor Volk and Vladimir Dzhanibekov.  A short while after entering the space station the crew once again reported to ground control that the space station was bathed in a blinding orange light. Again when the crew looked out the portals they saw angelic beings. They were the size of an “airliner,” commented the cosmonauts. The incident was initially hushed up in the old Soviet Union and the crew was cautioned not to speak of the event publically.

All six astronauts reported seeing “a smiling angel.” The incident could  be attributed to the the fatigue over  a long space voyage, if it were only about the first crew. However, this explanation does not fit for the second crew – a meeting with the angels took place shortly after their arrival at the station. So the second crew just confirmed the observation of the Angels.

The six cosmonauts who looked out the portholes all  reported seeing seven angels all resembling humans but with wings. Each angel was reported to have been as big as a jet airliner and each of them had a smile of their face as if trying to share some kind of knowledgeable secret with the cosmonauts. Again keeping up with the movements and speed of the space station for a short while they later just simply disappeared.

Some believe that the Angels (in the Vedas – the Gandharvas, the Yasuni) live in a different spatial continuum (parallel world ) which may come into contact with our world.

Longterm stress could certainly explain what had happened to the first crew members, however; it was only a short while after the arrival of the second crew that the angels revealed themselves again. How could the second crew be suffering from the stress of long term space travel as they had just arrived. No viable explanation has been offered as to why the second sighting occurred.

After this strange phenomena occurred the crew went on to set a record of 237 days in space . After the crew left the Salyut 7, it was lost in space in 1985 and began to drift. When recovered, they found it completely dead of all electrical charge and covered in ice but after diagnosing the problems they were able to fix the vessel.

Salyut 7 was last inhabited in 1986 by the crew of Soyuz T-15, who ferried equipment from Salyut 7 to the new Mir space station. Between 19 and 22 August 1986, engines on Kosmos 1686 boosted Salyut 7 to a record-high mean orbital altitude of 475 km to forestall reentry.

It underwent uncontrolled reentry with Kosmos 1686 on 7 February 1991, reentering over Argentina, scattering much of its debris over the town of Capitan Bermudez.

The very first man in space had what might be considered a mystical experience or fantastic dream.    In the first manned spaceflight from the Baikonur Cosmodrome  in April 1961 ground control lost contact with the first man in space.   Yuri Gagarin twice briefly fell silent and did not answer calls. Gagarin could not recall if he passed out or fainted involuntarily.  During a visit to a therapist to check his overall mental well-being, he was subjected to hypnotic regression in which he was able to recall the period in which he blacked out during the flight of Vostok-1.  He first saw a head, then a person floating in front of him.  Gagarin did not feel fear, but could not move his arms or his legs.  Then he heard a voice in his head, it said, “Do not worry, everything will be fine. You’ll come back to Earth.”  Then the person vanished.   Some researchers believe cosmic radiation and its affect on the human mind may be responsible for some of the visions experienced by astronauts.

It is rumored that these very angelic creatures often accompanied U.S. Space Shuttle flights, butt such information in the United States is classified as “secret.”

Look at this breathtaking object recently caught by the NASA/SOHO photos makes us think that only two possibilities could explain this sighting. First, this could be a UFO in the shape of an angel headed directly into the sun…probably harvesting its energy. Second, it is an angel who’s size would be bigger that twice Earths size. What they call a light being which may live in or be part of the sun itself. Also note that it leaves a trail behind it which tells us the direction it was traveling at the time of the photo, writes Scott C. Waring, author of UFO Sightings Daily.

Here are a couple of Unidentified Objects in this photo taken during the STS 115 Shuttle Mission. The first object is red and glowing above the space station while the second is a ghost like object. These objects can be found in the Original NASA photo click here http://spaceflight.nasa.gov/gallery/images/shuttle/sts-115/hires/sts115-318-026.jpg 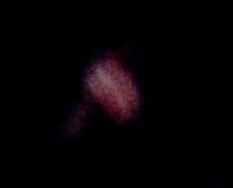 Photo by NASA and here is the caption next to the photograph : STS115-318-026 (17 Sept. 2006) — Backdropped by the blackness of space and Earth’s horizon, the International Space Station moves away from Space Shuttle Atlantis. Earlier the STS-115 and Expedition 13 crews concluded six days of cooperative work onboard the shuttle and station. Undocking of the two spacecraft occurred at 7:50 a.m. (CDT) on Sept. 17, 2006. Atlantis left the station with a new, second pair of 240-foot solar wings, attached to a new 17.5-ton section of truss with batteries, electronics and a giant rotating joint. The new solar arrays doubled the station’s onboard power when their electrical systems were brought online during the next shuttle flight in December 2006.