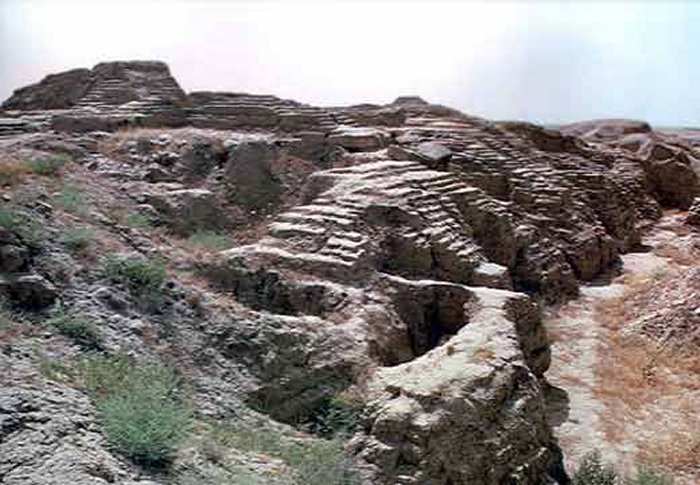 A. Sutherland  – AncientPages.com – The beginnings of the city of Ashur, (also known as Assur) date back to the third millennium. The city was located about sixty miles to the south of the city of Mosul, Iraq, where today, there is a small village named Shergat (or Qalat Shergat), built of stones and bricks taken from the ruins of the city of Ashur (Asshur).

From the 14th to the 9th century BC, Ashur was a thriving city. It developed fast and became an important trade center with trade routes leading to Anatolia (modern Turkey). The city exported tin from western Iran, textiles in return for copper, and provided transport of timber from Syria. Many merchants frequently visited the city, and the inhabitants of Ashur themselves began to deal with trade, who even founded their own trade colonies.

Around 1800 BC, the Amorite ruler Shamshi-Adad I included Ashur into his domain, where it became a ceremonial center and the first imperial capital of the Assyrian Empire, unquestionably, one of the greatest of the ancient world.

In Genesis 10:11 we read: “Out of that land came forth Asshur and built Nineveh, and the city Rehoboth, and Kalah…”  Asshur was the second son of Shem and a grandson of Noah, however, in this case, the name Asshur is often used to refer to the place where his descendants dwelled (Ezekiel 27:23, Numbers 24:22, 24).

Ashur (its name was at the same time, the name of a god) was not particularly large city; it had probably no more than 15,000 inhabitants and was situated south of Nineveh and on the western bank of the river Tigris, in northern Mesopotamia, corresponding to modern country of Iraq, northeastern Syria northwestern Iran and southeastern Turkey.

Assyria had a vulnerable location in the vicinity of the major trading and raiding routes connecting north and east and stretching from Anatolia in the north to Babylon in the south. All cities near Ashur, located on the eastern side of the Tigris valley, in the foothills of Zagros, were easily accessible to foreign intrusions or armed invasions of mountain tribes, so the Assyrians still had to be ready for combat. 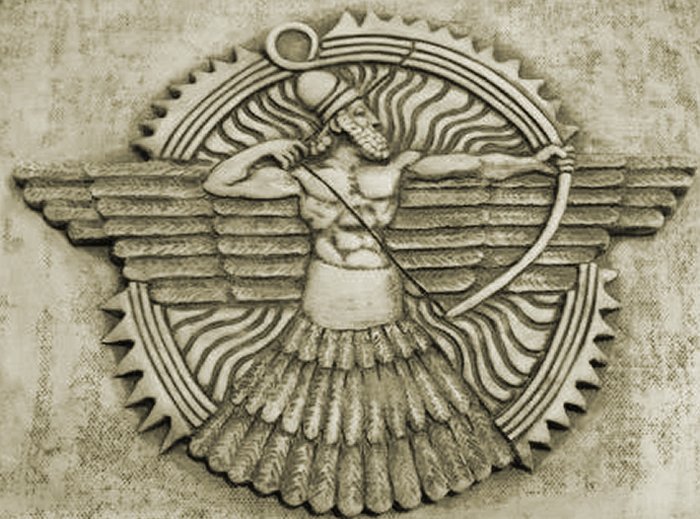 Ashur, the chief god of the Assyrian pantheon in Mesopotamian religion, worshipped mainly in the northern half of Mesopotamia, and parts of north-east Syria and south-east Asia Minor (old Assyria).

It was crucial to build a perfectly functioned self-defense in order to survive both in cities and within the borders of the empire. And yet, the city of Ashur was better situated strategically and easier to defend.

Fortifications were massive and the strongest of them were built on the southern part of the city as it was definitely its most vulnerable point. From one side, the city was well-protected by the cliffs and later in front by an immense high wall with eight huge gates and a 15-meter-wide moat.

On the other three sites, the first capital of Assyria was almost invincible.

The city was Assyria’s oldest capital, which was already known during Akkadian and Sumerian times. It was also an important religious center for worship of the supreme god Ashur, who became the national god of Assyria and protected the Assyrian kings. He was venerated along with Enlil and Ninurta, god of agriculture, scribes, hunting, and war. Several Assyrian kings had the god Ashur’s protection in their names. 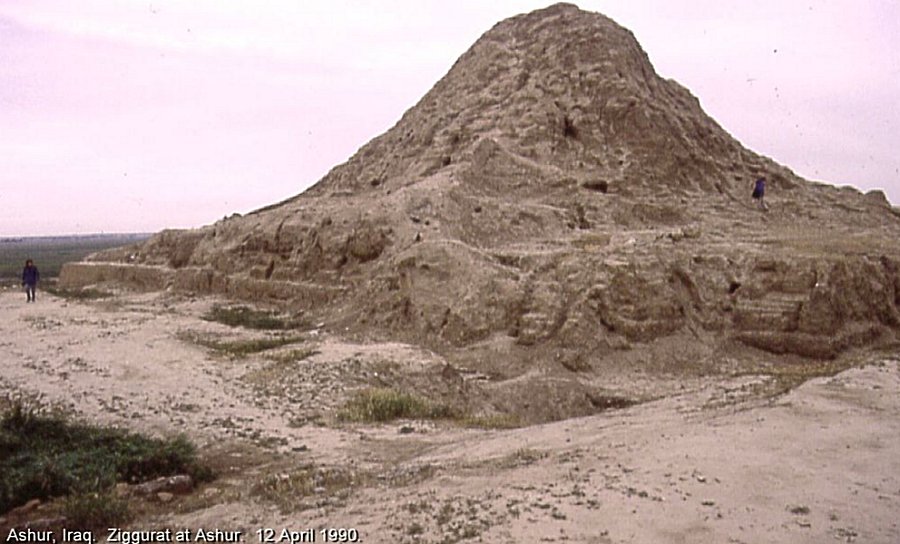 Ruins of ziggurat at Ashur. source

In the city, there was an early cult of the gods Adad, Assur and the goddess Ishtar. Ashur contained a large number of important religious buildings, and a handful of palaces (more exactly three of them and thirty four temples, based on ancient sources dated to 7th century BC).

Many ruined structures (many of them had never been excavated) include several major buildings such as the double-temple of Anu and Adad (the god of storms), another was that of Bel, the lord and of the Sumerian goddess of love and war, Ishtar, known to the Hebrews as Ashtaroth and the Starte of the Greeks. There are also ruins of the Old Palace with its royal tombs and several living quarters scattered across the city.

However, the most striking construction among the ruins of Ashur is the ziggurat, built of backed bricks on the top of a rectangular platform composed of several layers, dedicated to the god Ashur, as well as the ground temple nearby devoted to the same god and called “Temple of the Universe”. There are also temples devoted to the gods of the sun and the moon, and one with two towers sacred to Anu, god of the sky, and Adad, god of storms. Assyrian rulers were buried in vaulted tombs beneath palaces, ancient records say, but these places were already robbed in antiquity. 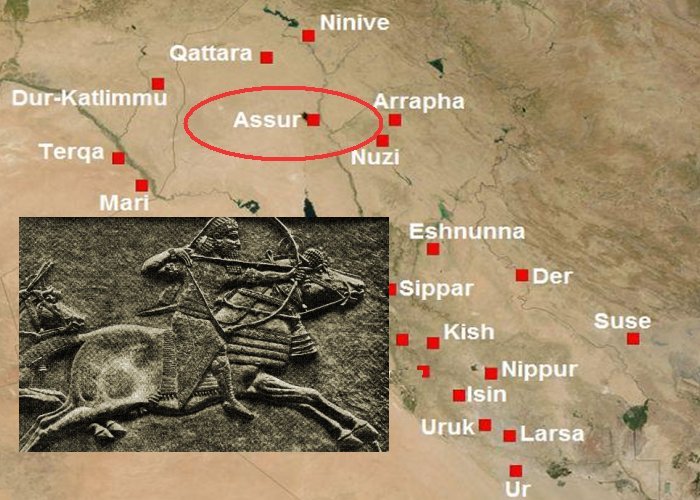 Mesopotamia in 2nd millennium BC. source

Many clay tablets and bricks, covered with cuneiform inscriptions about historical events, conquests, eulogies of rulers, were discovered in the excavated ruins of Ashur.

When Assyria’s strategical value increased in the region, the capital of the empire was transferred from Ashur to Kalah and later to Nineveh about 880 BC, but Ashur still remained a highly prestigious city for a long time.

Civil wars tormented and significantly weakened the region, including  the city of Ashur, especially under the reign of Shamshi Adad (824-811 BC). Later, under the next kings who followed including Tiglath Pileser III (745-727 BC) and Ashurbanipal (668-627 BC), the city was rebuilt and its walls strengthened.

Ashur was finally captured and destroyed by the Babylonians in 614 BC and did not fully recover until the Parthian Empire controlled the city from the 1st century AD until the Romans sacked it in 257. Then, the city was populated again until the 14th century before Timur (1336-1405), the founder of the Timurid Empire (1370-1507) sacked the city and murdered its inhabitants.

The city today serves as an important example of the past Assyrian Empire.

Copyright © AncientPages.com All rights reserved. This material may not be published, broadcast, rewritten or redistributed in whole or part without the express written permission of AncientPages.com

Kriwaczek, P. Babylon: Mesopotamia and the Birth of Civilization

Advertisement. Scroll to continue reading.
In this article:Ashur, Mesopotamian religion