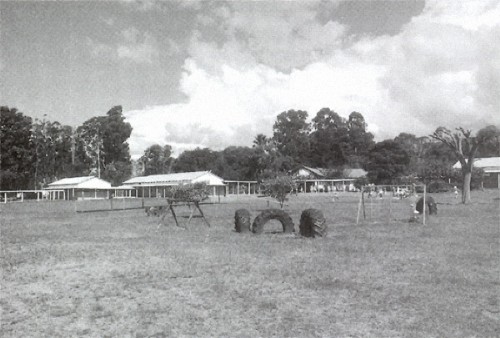 Two decades ago something strange occurred in a remote elementary school in Ruwa, Zimbabwe.  Sixty two curious and frightened schoolchildren witnessed a silver object descend from the sky, onto the furthest part of the schoolyard. To their terror, a small humanoid creature appeared on top of the craft then quickly made its way around the weed-entangled area of the lot. Some of the kids ran in horror while others stood transfixed at the strangely events unfolding before their eyes.

That’s when Cynthia Hind, a South African MUFON field investigator got the call. She quickly pieced the incredible story to some strange events that began just a few days prior. Hind had written an article titled ‘UFO flap in Zimbabwe: Case No 95.’ In it, she begins with the date of Wednesday, September 14th, 1994. It reads:

“Wednesday, 14th September, 1994, was an exciting night for Southern Africa. Round about 20:50 to 21:05 hours, a pyrotechnic display of some magnificence appeared in the almost clear night skies of this part of the continent.”

Case No. 95 goes on to talk about the multitude of witnesses that reported seeing strange and wonderfully eerie fireballs burning across the night sky. These witnesses included scientists, astronomers, amateur astronomers, and the dozens of scattered residents that happened to be looking up into the night sky.
The accounts varied of what flew across the sky that night. From a zeppelin on fire to a low-flying jumbo jet with visible cabin lights and sparks blazing out its tail. Many witnesses submitted drawings of what they saw in the sky that night and remarkably, almost all of the the drawings resembled the same shaped craft in distress. It would be another 48 hours before Case No. 96 would begin with an incredible experience of the third kind.

“On Friday 16th September, at approximately 10:15, 62 children from Ariel School, a private primary school in Ruwa (about 20 km from Harare) were in their playing field for the mid-morning break. Suddenly, they saw three silver balls in the sky over the school. These disappeared with a flash of light and then reappeared elsewhere. This happened three times and then they started to move down towards the school with one of them landing (or hovering) over a section of rough ground made up of trees, thorn bushes, and some brown-grey cut grass with bamboo shoots sticking up out of the ground. The children are not allowed in this area although it is adjacent to their playing field and is not fenced off, because of snakes, spiders and perhaps other harmful creatures. One can soon disappear from view while walking here, and there is only one very rough track used by tractors in an attempt to clear this area.

There is a line of electricity pylons and according to one boy, the object followed along this line prior to landing. There is also some controversy as to whether the object _landed_ on the ground or hovered above it. On Tuesday, 20th September, I went out to the school with a BBC reporter and their television equipment, as well as my son and Gunter Hofer, a young man who builds his own electrical equipment, viz, a Geiger counter, a metal detector and a magnetometer, to try and see if the object left any traces behind. The headmaster of the school is Mr. Colin Mackie, who was most co-operative, and although he had never been involved with UFOs or a believer in them, said that he believed the children had seen what they said they saw.

I was able to interview about 10 or 12 older children and this was recorded for BBC television.

One eyewitness, Barry D., said he had seen three objects flying over, with flashing red lights. They disappeared, and reappeared almost immediately, but somewhere else. This happened about three times. Then they came and landed near some gum trees; Barry said the main one (object) was about the size of his thumb nail held at arm’s length. The reports were similar although some children were more observant than others. The consensus of opinion was that an object came down in the area where they indicated, about 100 metres from where they were at the edge of the school playing field. Then a small man (approx 1 metre in height) appeared on top of the object. He walked a little way across the rough ground, became aware of the children and disappeared. He, or someone very like him, then reappeared at the back of the object. The object took off very rapidly and disappeared. The little man was dressed in a tight-fitting black suit which was ‘shiny’ according to one observant girl (11 years of age). He had a long scrawny neck and huge eyes like rugby balls. He had a pale face with long black hair coming below his shoulders.

I had suggested to Mr. Mackie prior to visiting the school and before the children had been interviewed, that he let the children draw what they had seen and he now has about 30-40 drawings, some of which are very explicit and clear, although some are rather vague. The children’s’ ages vary from 5/6 to 12 years. I have 22 photocopies of the clearer drawings as Mr. Mackie kindly allowed me to page through the pictures and choose those I wanted. Most of the descriptions are similar but some of the craft are very obviously ‘flying saucers’, and I wonder how many of these children have had access to the media. Others are crude but more or less in this saucer shape.

The children vary in cultures: there are black, white, coloured and Asian children. One little girl said to me, ‘I swear by every hair on my head and the whole Bible that I am telling the truth.’ I could see the pleasure on her face when I told her that I believed her. The smaller children from 5-7 years were very frightened at the time and ran shouting ‘Help me, help me.’ When the older children asked why they were saying this, the reply was, ‘He is coming to eat us.’ I should think this applied more to the black African children who have legends of _tokoloshies_ eating children. Their teachers were in a meeting and did not come out. When I queried the headmaster about this he said the children always shouted and yelled during their playtime and no-one thought there was anything unusual going on. The only other adult available at the time was one of the mothers who was running the tuckshop. When the children came to call her, she did not believe them and would not come out: she was not prepared to leave the tuckshop with all the food and money. Gunter and the men thoroughly examined the ground around where the children had seen the object, but could get no reaction on the geiger counter or any other equipment. If the object was hovering perhaps nothing would show.”

Coincidently the famous Dr. John Mack was in Zimbabwe during these events and decided to investigate the incident at the Ariel private school. What follows are the recorded interviews of some of the children of Ariel school.

Twenty years after the harrowing account of the humanoid sighting, some of those original witnesses were interviewed on camera for the second time. Their feelings, although matured, still express the same unwieldiness since their original interview. Fast forward to the 11:34 mark for the recent interviews of the Ariel schoolchildren.

For years, the strange events that unfolded in the mid-morning break on that small schoolyard have remained unexplained like many other UFO incidents. Even the most ardent of skeptics can only theorize that this must be some sort of mass hysteria but the problem with that theory is that mass hysteria does not include mass hallucination. Mass hallucination, as far as science goes, has never been proven as a natural phenomena . So most of the skeptical readers simply brush this story off as if it was just another schoolyard prank. As the years pass and the children grow up and develop lives and families of their own, one thing remains constant about the case. Their emotions and accounts for what transpired that September morning in Ruwa, Zimbabwe in 1994. In this article:MUFON, Ruwa, UFO