The most widely known secret military facility to the general public is the so-called Area 51 in the Mojave Desert in Nevada. According to the world general legend, it is a kind of office for the meetings of the US military with aliens, which, in fact, is very unlikely.

The Pentagon undoubtedly has such offices, but even the top generals of this department and Area 51 are not aware of them – just one of the sites to which, for some reason, they were allowed to rivet everyone’s attention.

Nevertheless, Area 51 cannot be called completely uninteresting, since very unusual aircraft are indeed observed there from time to time – from secret TR-3Bs to promising F-117s, which were first seen there (more precisely, shadows from these aircraft were discovered partially pulled out of the hangars, which appear in the photo below):

One of the fans of Area 51 is Gabriel Zeifman, well known to many American ufologists. He even has his own Cessna 150 jet, on which he occasionally flies around the so-called “box” – the border of the permitted flight zone.

Such happiness happens very rarely – when the military inside the “box” does not have any special secrets and the penultimate time Mr. Zeifman was allowed to fly on his maize in April this year, after which he waited for the next flight for three whole months. Nevertheless, the wait was worth it and the catch was great.

Since the military, of course, do not allow flying directly over the base, Mr. Zeifman filled the aircraft cabin with various expensive optical devices, after which, having completed the April flight, he began to analyze the images:

The red arrow marks the hangar, which did not exist in the fall of 2019 – it was removed in April. The hangar is very large – at least a dozen fighters will fit there, so the first thing that confused Mr. Zeifman was why this building was built in such an inconvenient place?

The Mojave Desert is not Manhattan, there are at least heaps of areas there, so the construction of a hangar inside the site with other hangars looks strange. They don’t do that – hangars and workshops are always built in a square – so that there is a free area inside where you can roll out equipment or build comrade officers and warrant officers there for drill training or distribution of important instructions.

Therefore, Zeifman’s first thought was that a heavy transport helicopter had unloaded on the site the day before, after which a tent was immediately deployed over the cargo, and a hangar 18 or something like that was urgently built on top of the tent.

Thought, of course, is based solely on personal experience and elementary logic, but nothing more: there were no facts to support it. However, when Mr. Zeifman began to analyze the images of Area 51 over the summer of this year , the desired hangar was no longer on them:

There was no such idiocy to build something and then immediately demolish it at the Pentagon.

In the light of these considerations, Zeifman is almost sure that on the eve of April 2020, something fell from the sky that the American military immediately confiscated and dragged it to their beloved Area 51. Then the loot was either solemnly handed over to the legitimate owners, or dismantled for parts and told to the owners something like “we don’t know anything”.

Nobody, of course, can either refute or confirm Zeifman’s hypothesis, however, as the world conspiracy collective mind says – construction on Area 51 never happens just like that.

Even if we exclude the version of the UFO crash, then there was the arrival of some new technology, at least, and as a maximum, there will soon be some kind of war, in which the secret things delivered the day before to Area 51 will be used. And this is not speculation, but the opinion of people who have been staring at this Area 51 for decades. The correlation is obvious: the Pentagon’s activity in the Mojave Desert is the Pentagon’s activity in the media.

Nobody of course really knows what happened there, but the Pentagon will soon be on the news for sure. That is, either they will show the people some of their TR-3Bs, or they will turn on the BlueBeam, or they will start a war, or something else will happen. 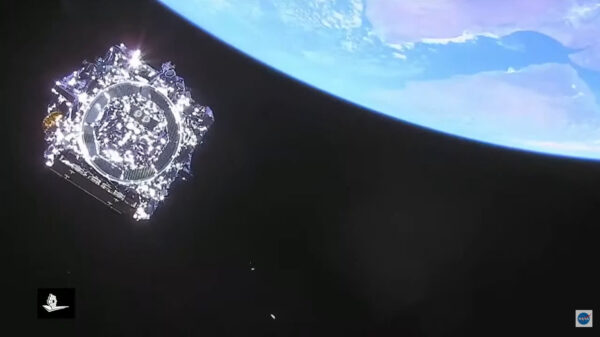 Is the world waiting for some colossal extraterrestrial event? Countless of UFOs in Earth orbit during the launch of the James Webb Telescope

The European Space Agency has released footage of the Ariane 5 rocket, which captured the telescope as it receded, and this video is truly...