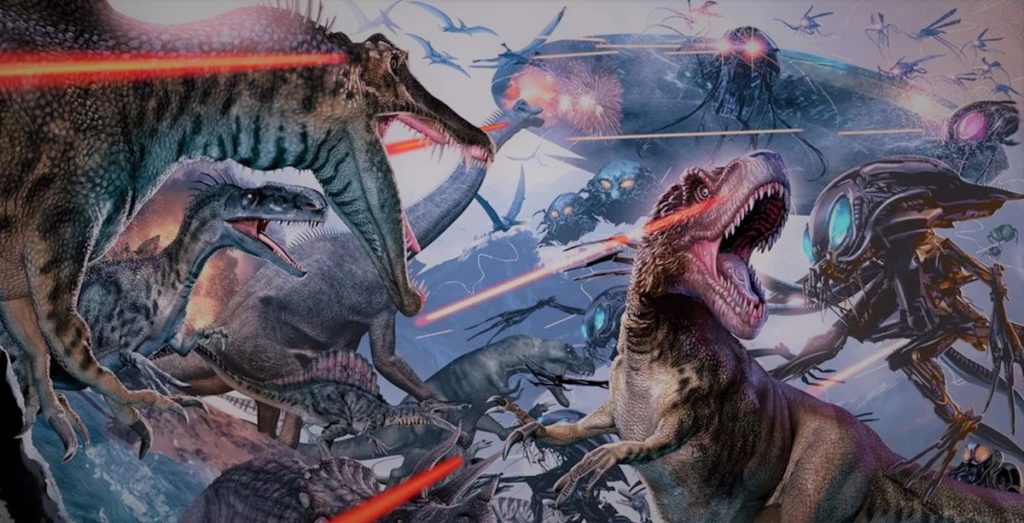 Official science says that the huge lizards that once inhabited our planet became extinct about 65-66 million years ago. There are many versions of the death of these large reptiles, but the most probable theory is considered to be the fall of a huge asteroid, which changed the axis of the Earth’s inclination, provoked volcanic activity with the release of millions of tons of ash into the atmosphere and, as a result, a decrease in temperature on our planet. According to this classic version, cold-blooded dinosaurs simply could not adapt to climate change, unlike warm-blooded mammals, and eventually died out, leaving only petrified skeletons in their memory.

For hundreds of millions of years, dinosaurs dominated the Earth, capturing and subjugating new territories. Centuries were replaced by millennia, and these huge animals knew no equal in strength and development. But one day the world changed. Aliens came to Earth who destroyed the dinosaurs and thus prepared the planet for the life of more intelligent creatures. 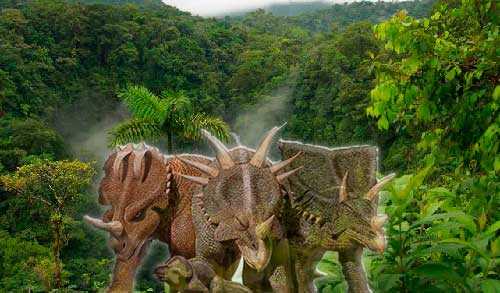 Dinosaurs – the inhabitants of a different star system

According to scientists, the last dinosaur of the Earth died 66 million years ago. Destruction began with the fall of several large asteroids of large mass, which launched the mechanism of mass extinction. A recent study claims that the fall of the asteroid group was the “final blow” in the totality of previous events.

Before the fall of a huge asteroid in the province of Yucatan, Mexico, our planet was already exhausted by various natural disasters. The destruction was carried out by intense seismic and volcanic activity, huge fluctuations in sea level, as well as extreme temperature changes. A whole group of climatic factors caused the destruction of the food chain of dinosaurs, which began to suffer from hunger.

On the other hand, the large asteroid caused powerful tsunamis, tectonic movements and a high level of radiation. The continental-sized fires that swept the surface of the entire planet significantly worsened the difficult situation. This killed any animal that could not find shelter underground or by water.

According to experts, if an asteroid had been exposed several million years before the climate deteriorated, everything could have turned out differently. In this case, there would be a huge food base, favorable for the life of dinosaurs. However, a number of unfortunate events occurred in the life of animals, where the asteroid crash occurred at a critical moment of their extreme weakness.

At the same time, some questions arose regarding the extinction of this species of huge inhabitants of the Earth. According to researchers, some descendants of dinosaurs managed to survive, such as crocodiles and birds. But the death of the dinosaurs took an interesting version. 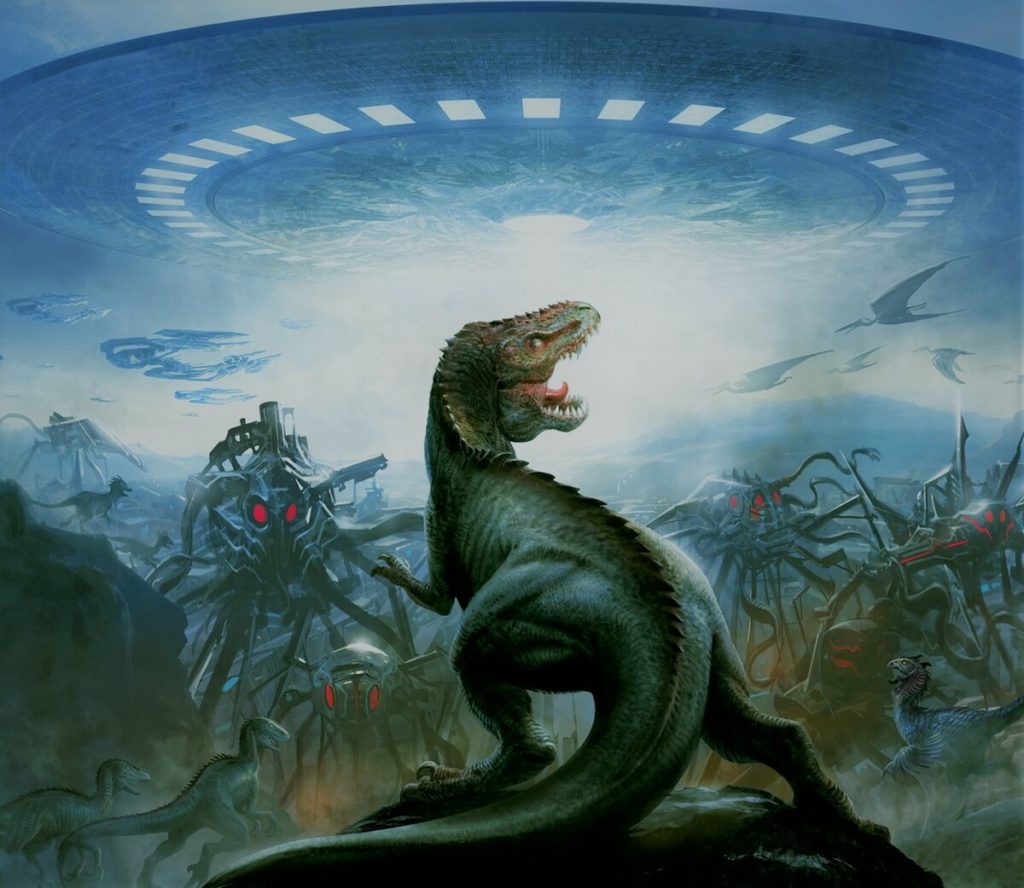 There are more exotic versions of the end of giant dinosaurs. According to one of them, the dinosaurs were destroyed by aliens. Genetic experiments have been conducted on some with the goal of breeding a new intelligent race, similar to humans.

Supporters of the “conspiracy theory” believe that an experiment has turned out and the so-called “reptilians” still live in parallel with our civilization in underground tunnels and cities, occasionally catching the eye of frightened eyewitnesses. Others claim that the aliens exterminated the ancient reptiles in order to make way for the new”homo sapiens” project, that is, a rational person.

Back in the 50-60s of the twentieth century, the famous writer and archaeologist Alexander Kazantsev, excavating the cemetery of dinosaurs in the Gobi desert found the skulls of these huge animals with neat bullet holes. And on the well-known stones of Iki from South America, scenes of taming and hunting for dinosaurs are depicted, while people (or maybe anthropomorphic inhabitants of other planets) are not inferior to these giants in size. 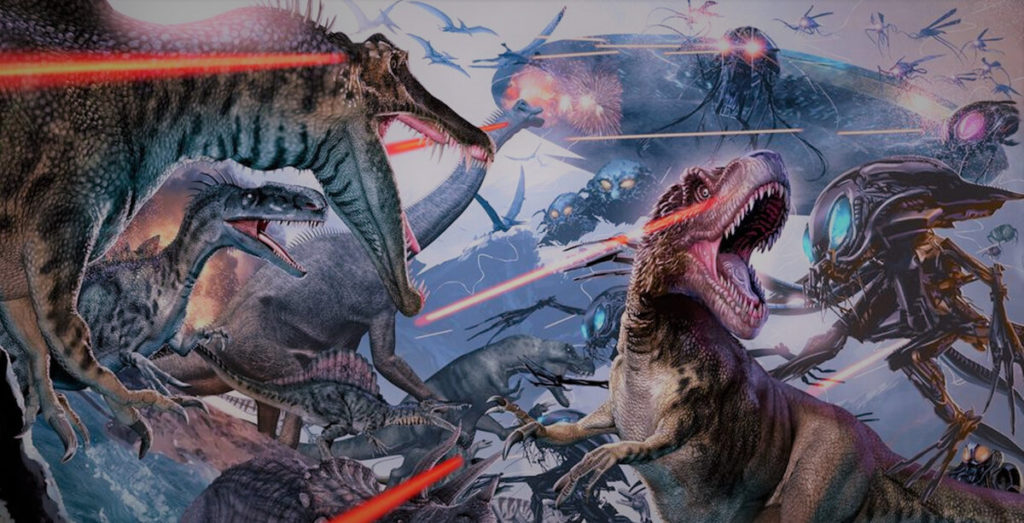 What if the genocide of dinosaurs was carried out by aliens?

It is possible that gigantic lizards ran on the ground several thousand, or maybe hundreds of years ago. The American paleontologist Marie Schweizer opened several mass graves of ancient reptiles and felt a cadaverous smell and even found the remains of ligaments, blood vessels and soft tissues in the bones. After attempting to publish his research, Schweizer was expelled from the scientific community, banning further research.

Scientist Luis Alvarez during excavations discovered a very thin layer of precipitation over 54 million years old. Among the investigated material, a substance was discovered that is not a common component for the Earth. There have also been suggestions about the origin of this element, in which it is assumed that the material could have appeared due to consequences of nuclear bombing.

Other scientists have investigated substances found in dinosaur bones. The factor that attracted their attention is the high level of radioactivity that exists in the bones of dinosaurs.

All these factors led to the assumption that the true cause of the extinction of the dinosaurs is some advanced race from outer space. Moreover, this may not be the first “purge” that aliens conduct on Earth. And judging by the cycles of extinction, it can even be the fifth!

The reason aliens could be guided by destroying dinosaurs on the planet is because the animals posed a threat to their new human project. Aliens could prepare territories for the evolution and development of mankind in order to subsequently be able to provide a safe and reliable world for life.

It is reasonable to assume that the idea of ​​a human farm created by aliens is visible in this. However, in order to dominate the planet and subsequently give us the opportunity to live, it was necessary to replace the dinosaurs with another species.

Giants who may have had to fight or even “tame” dinosaurs were the kind in front of people. These giants were mentioned in the genesis, and there is some evidence for this, such as huge petrified footprints in the rocks. 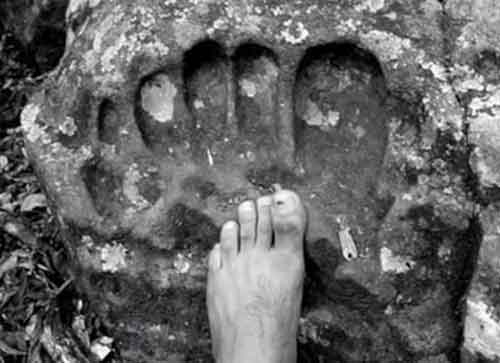 There are also some artifacts from our ancestors where you can see people fighting dinosaurs. That is why it is entirely possible that the gigantic humans created by the aliens had to fight the surviving dinosaurs who were able to survive the alien attack. 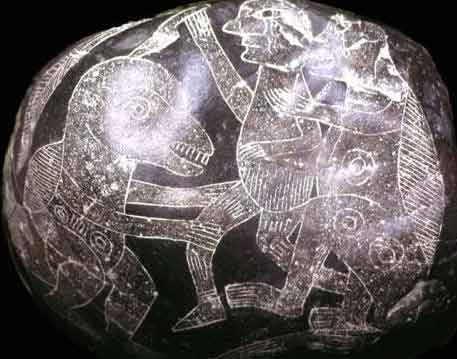 Some species of dinosaurs, such as Rex, were the ones that posed the greatest threat. For this reason, the giants had to make a choice of species that could survive. This allowed the survival of animals such as crocodiles and birds.

In addition, some researchers claim that there is a species of reptile, a descendant of these dinosaur races that were brought from outside the planet. This was done with the goal of performing hybridization experiments between dinosaurs and aliens.

This time was the beginning of the spread of those inhabitants of the planet who subsequently found refuge in underground bases created by them themselves. Today, some of them are called gnomes, others are trolls – and they looks fabulous. At the same time, there are many underground tunnels that cross our entire Earth.

There is no doubt that there was a race of reptilian-humanoid creatures on our planet before us. They had a lot of time to create tunnels under the sea and create huge underground cities. There are evidence and photographs of these underground tunnels that encircle the entire planet

Some believe that these projects have not lost their relevance, and strange experiments are still being conducted on Earth.