Computer simulations by a pair of researchers at the University of Edinburgh predict that a fleet of interstellar probes could explore the entire Milky Way galaxy within a fraction of the present age of Earth. This may seem like a tall order considering that our farthest interstellar spacecraft, Voyager 1, is still less than a light-day from Earth after being launched 36 years ago.

In the new simulation, however, alien probes only need to travel at 10 percent the speed of light to survey the entire galaxy within 10 million years. And, they could get a turbo-boost and save fuel by doing a slingshot off the gravitational fields of stars.

The concept of self-aware and self-replicating probes traveling across the galaxy is nothing new, however; the idea goes as far back as 1960. It was promoted by SETI pioneer Ronald Bracewell as an alternative to listening for interstellar artificial radio signals. The idea of a machine capable of cloning itself goes back at least 100 years; mathematician John von Neumann detailed the operation of such a robot in 1949.

Voyager 1 and 2 zipped across the solar system with a boost form bouncing like a pinball off the gravitational fields of the massive outer planets.

“From the scaling of the probes’ performance with star number, we conclude that a fleet of self-replicating probes can indeed explore the galaxy in a sufficiently short time to warrant the existence of the Fermi Paradox,” the team reports.

The Fermi Paradox — where nuclear physicist Enrico Fermi asked the rhetorical question “where are they?” (extraterrestrials) — ponders why we have no evidence of alien visitations. For the UFO buffs, let me flatly say this does not mean pointy-eared aliens should be here and now, but instead suggests occasional visits over geologic time by virtually immortal robots.

The team’s simulations mean that our solar system should have been visited — perhaps more than once — well-before the dawn of man. Their alien builders might have been motivated to have the machines go stealthy and cover their tracks once a planetary system survey is completed.

In Arthur C. Clarke’s 1972 novel, Rendezvous With Rama, star-hopping aliens are pretty blatant. A giant cylindrical space ark enters the solar system. An astronaut survey team explores its dark, ghostly, interior hibernating city. Humans finally realize that the mothership is not stopping for a visit, but simply using the sun’s gravity to get a boot to destinations unknown.

Rama aside, don’t look for ‘spent’ or destroyed probes because visiting robots might definitely go green by not leaving behind any trash from their sorties. They would also have ability to self-repair during long interstellar voyages, and self-replicate with the ultimate 3D printer.

In a sprint across the galaxy a civilization may send out a few probes that would be programmed to choose the next star they travel to according to some decision-making algorithm. Once they reach the new star system, they scan for signs of life, and create a copy of themselves. The parent and child probe each pick a new star to travel to, and the process repeats itself in a geometric progression.

This scenario is compounded by the fact there could very likely be more than one fleet of probes from different extraterrestrial civilizations plying the galaxy. What if they run into each other? A purely sci-fi inspired scenario is where mutated probes abandon their original mission and start to prey on normal probes!

Such an interstellar fox and rabbit chase would greatly increase the exploration time and reduce the number of visits to our solar system, say the researchers. In the new simulation the exploration probes are continuously traveling at maximum speed and constantly dispersing radially across the galaxy. Predators would have a hard time catching their prey.

Equally problematic is the dilemma of how a fleet of probes stays in contact with one another so that they don’t duplicate efforts. Light travel delay times would squelch communication, unless superluminal contact has been achieved by something as exotic as quantum entanglement. Then all probes would know exactly where every other probe has been and is heading. Each probe could leave behind an omnidirectional beacon that emits a signal showing the star has been visited. Or probes could deposit a “captain’s log” for other probes to readout.

Ultimately the data collected by the entire fleet could be placed into a giant galactic archive. It would be a resource for all interstellar civilizations that are smart enough to find it, enter the correct password, and download survey data on many billions of star systems.

What’s sobering is that such probes would be like a swarm of bees buzzing through a field of flowers. They diligently carry out their exploration duties and are oblivious to contacting any native biological intelligence they might encounter.

That is, unless the builders programmed the robots to set up a threshold test of the intelligence and maturity of a native species. If the species passes the test they are allowed to communicate with the interstellar probe.

What sort of maturity test would you perform on Homo sapiens? 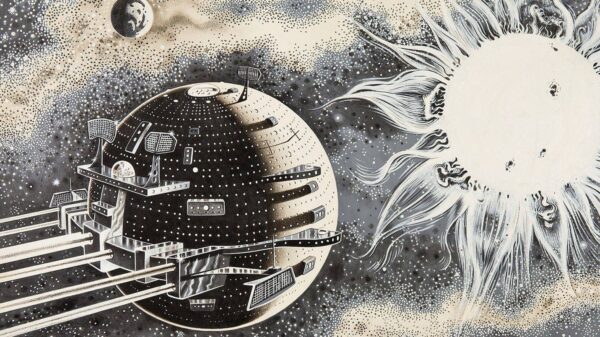