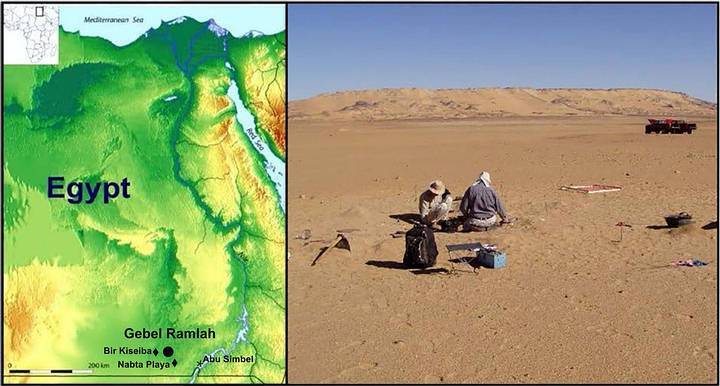 Recently, archaeologists have excavated six burials from civilization prior to Pharaonic Egypt. The discoveries made have allowed us to better understand the enigmatic Neolithic culture of the people who lived in the Nile plain before the ancient Egyptians and who laid the foundations for their civilization.

An expedition has been studying burial sites of the Final Neolithic (4,600-4,000 BC) along the ancient shores of an extinct seasonal lake near a place called Gebel Ramlah, providing new data to solve how and who these settlers were.

The dynastic period of Egypt begins around 3100 BC Before that, between 9300 and 4000 BC, the Nile plain was inhabited by Neolithic peoples. These villages have not been well studied, at least in relation to their successors, mainly because archeological sites are often poorly accessible. The remains of their settlements are located mainly under the old Nile flood plain or in peripheral deserts.

Members of the Combined Prehistoric Expedition, with permission from the Supreme Council of Antiquities of Egypt (SCA), have been studying the Neolithic sites of the western desert of Egypt. Although not lush, the Neolithic was wetter than today, which allowed the former shepherds to populate what is now the middle of nowhere.

During the last part of the Neolithic period, the ancient settlers began to bury the dead in cemeteries and the skeletons provide critical information about their lifestyle.

Between 2001 and 2003, the members of the expedition excavated three cemeteries of this era with 68 skeletons. The tombs were full of objects with ornamental ceramics, sea shells, stone jewelry, and ostrich eggshell. They also discovered ornamental jewelry and stone weapons for men.

These people were tall, enjoyed a long life and showed low rates of infant mortality. The men measured about 170 cm, while the women, about 160 cm. The majority of men and women lived for more than 40 years, some up to 50 years, an advanced age for those days.

More recent expeditions, which took place between 2009 and 2016, found two cemeteries very different from the rest. They analyzed another 130 skeletons discovering that they were accompanied by few artifacts and that they suffered from increased infant mortality, as well as a shorter life and stature.

Why were there so many differences between the two burials? They could have been separated populations, but it is unlikely based on general physical similarities. Therefore, they might differ by status, with one cemetery for the elite and one for the workers. This is the first proof of such a phenomenon in Egypt.

The sites also shed light on the family structures of the time. The total proportion of genders in all cemeteries is three women for each man, which may point to polygamy. The children were buried in adult cemeteries from three years old. There is also clear evidence of respect for the dead.

These behavioral indicators, together with the technological and ceremonial architecture, such as calendar circles and sanctuaries, imply a level of sophistication that goes well beyond that shown by the groups of pastors.

In this article:Antiquities of Egypt, Neolithic period