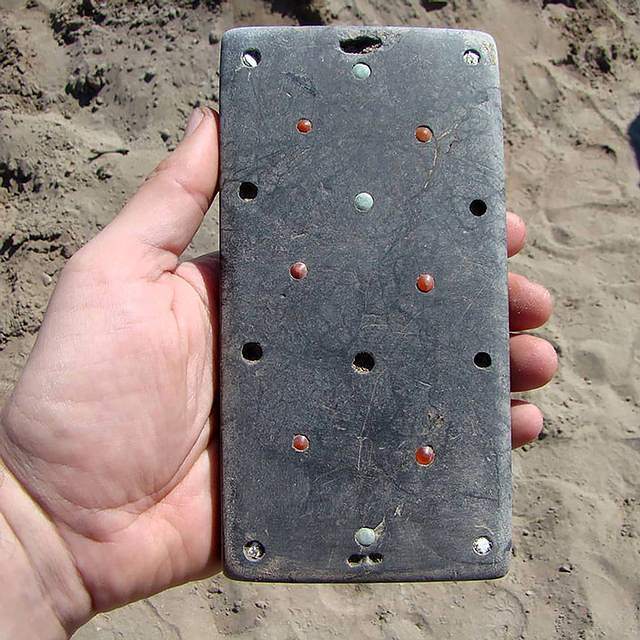 A group of archaeologists has found a strange black rectangular object next to the skeleton of a woman in a grave at the excavation site of Ala-Tey, in the mountainous Republic of Tuvá (Russia). The 2100 years old phone like device amazed the Archaeologists.

The researchers nicknamed “Natasha” to the ancestral woman, while the mysterious object that accompanied her was called “iPhone” because of her resemblance to Apple’s product. The 2100 years old phone like device has holes in the top and bottom just like the modern device.

However, and far from being an oopart, the object is actually a belt buckle more than 2,100 years old, unearthed in a tomb in the so-called «Russian Atlantis», the name given to a mountainous region in Siberia, already It is covered with water and only appears for a few weeks a year.

Pavel Leus, one of the archaeologists who participate in the excavations, explained that the team has been carrying out expeditions to the Ala-Tey burial site for several years. Leus added that the finding of that interesting 2100 years old phone like device was made in 2016, but the results have been made public only now.

“The burial of” Natasha “with an” iPhone “of the Xiongnu era remains one of the most interesting in this burial site,” said the expert.

The buckle, 18 by 9 centimeters, is made of precious stones inlaid with turquoise, carnelian, and mother of pearl, and is decorated with Chinese Wu Zhu coins. These coins have helped scientists date the object 2,137 years ago when they were minted.

Advertisement. Scroll to continue reading.
In this article:oopart, Russia