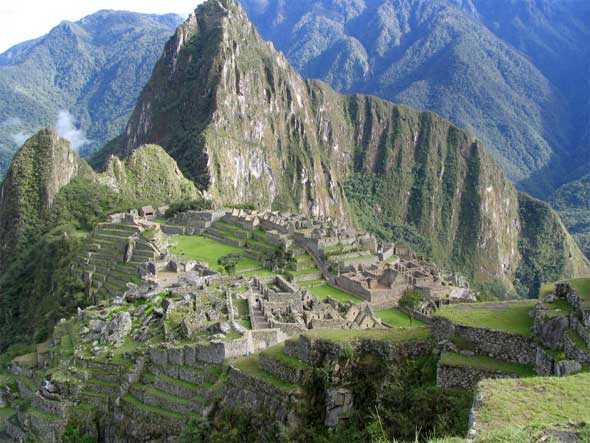 A French archaeologist and explorer says he and a team of researchers are on the verge of uncovering a lost secret treasure they say could prove to be the most significant archaeological find ever unearthed within the walls of Peru’s fabled Machu Picchu Incan citadel. However, the local Cusco branch of the ministry of culture has blocked the archaeologist, Thierry Jamin, and the Instituto Inkari NGO from excavating in the ruins they say have been turned over enough in the past century since it was re-discovered by American historian Hiram Bingham in 1911.
Jamin and other Inkari researchers say their electromagnetic equipment has revealed a hidden chamber concealed behind these walls which were erected sometime around the year 1450. They believe the secret cavity could house the tomb of Pachacuti Inca Yupanqui, the Incan ruler many experts believe Machu Picchu was built for back in the 15th-century.
If it is indeed the burial place of the ancient ruler or any other high ranking Inca figure, or figures as it may be, they say it is also likely the crypt would be a treasure trove of artefacts, gold, silver and other precious metals, possibly making it the biggest find at the archaeological site to date.
Jamin told Reuters their equipment has not only detected a hidden compartment, but that it is subdivided and also contains a set of stairs and deposits of gold and silver.
He also said the fact that the entrance to the mysterious department faces to the east is evidence it was used as a burial site. The Inca often carefully wrapped the bodies of important figures and buried them facing the rising sun to the east signifying rebirth. “We’ve brought to light the existence of a set of caverns at the lower part of some of Machu Picchu’s most important buildings, known as the urban sector, and that this famous entrance faces the east. This confirms the funeral nature of this building. And in the inside of this cavern we’ve established the presence of very important archaeological material.
So, whether it is Pachacuti’s mausoleum, or that of his panaca (court), or something else, what we are sure of is that there is something very important in the chambers located under the building,” Jamin said.
The team of researchers used specialized ground-penetrating radar, GPR, to safely map the area through the walls and below the floor of the urban centre of the ancient citadel. The equipment allowed them to analyse the layout of the chamber up to 20 meters (65 feet) below ground. The leader of the GPR exploration, Ricardo Tamaki, said the equipment is extremely accurate and that it not only revealed the existence of the compartments, but that it also showed there were “non-ferrous materials,” or metals that do not contain iron, housed within the walls. The non-iron metals, they argue, are likely gold, silver or other precious metals. “They used ground-penetrating radar (GPR) equipment which includes molecular frequency. This has revealed the presence of a moderately large cavity with compartments which the GPRs have also shown contain metals. And because of the accuracy of the equipment, it can reliably be said that yes, a chamber exists and that yes, it contains non-ferrous materials.This verifies the hypothesis presented by the Inkari NGO,” Tamaki said. The Inkari scientists say there are tens of compartments below, each of which could be a separate tomb of an Incan leader or noble meaning the possible presence of more artifacts of gold and silver.
But when Jamin and the Instituto Inkari presented their evidence to the local ministry of culture in the Cusco region along with their plan to excavate the area, their request was quickly denied. “The archaeologist Mr. Thierry Jamin was in Machu Picchu based on the authorization given to him by the Ministry of Culture in Lima to carry out observational studies and tour the citadel, but when he proposed, above all, to excavate based on some hypothesis because a laser scanner had detected an Incan tomb that was surrounded by children and at the same time there were some steps lined in gold, it was completely denied because this goes against the reality,” the director of the ministry of culture in the Cusco region, David Ugarte said. The ministry of culture and park directors said they worried the excavation project could jeopardize the stability of the structure. Past excavations have caused partial collapses of the historic walls and they said they worried the Inkari group was after the precious metals and not taking into account the historic nature of the site. “In terms of Thierry Jamin, he seemed to us to be more of an adventurer looking to find a treasure and not to do scientific research,” Ugarte added.
However, the Inkari group insists their plan was carefully designed and protects the structural integrity of the citadel. They said their team is made up of experts from different disciplines with sound records ensuring the safety of the project and the protection of the archaeological site. “I think that if they deny us the facilities to carry out our search, it is because those in charge of the Cusco cultural region know that we are on the verge of a major find, that by its nature, would completely change how we see Machu Picchu. And I’d bet those in charge of the culture ministry, on a local level, want to make the discovery (themselves),” Jamin said. In December the Inkari appealed the decision to block their excavation and hold out hope that they will be able to work in the area and prove their theory of a potentially spectacular find.

Hikers In Peru Noticed Something Strange Hidden Away On This Cliff Face. What The…

Ever wish you were an adventurer, or an explorer, discovering environs and relics unseen by human eyes for centuries? It’s certainly a fantasy I...