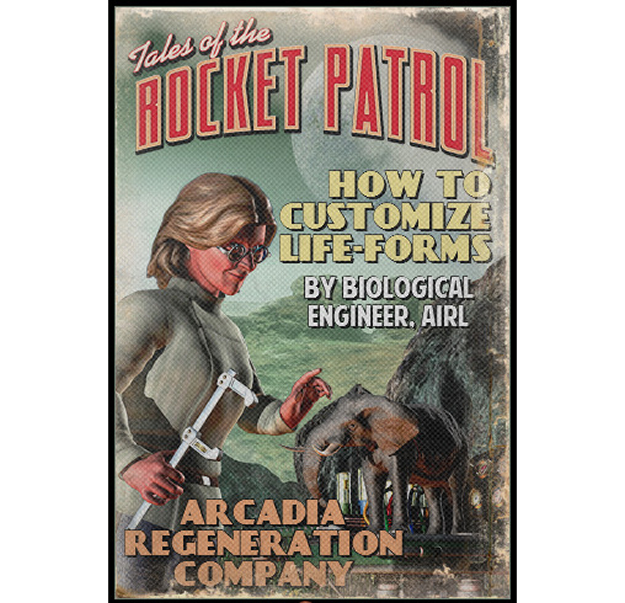 “As an officer, pilot and engineer of The Domain, I must always assume a very pragmatic point of view.  I could not be effective or accomplish my missions if I were to use philosophical dogma or rhetoric as my operations manual.  Therefore, our discussion of history is based on actual events that occurred long before any IS-BEs arrived on Earth, and long before the “Old Empire” came into power.  I can relate part of this history from personal experience:

Many billions of years ago I was a member of a very large biological laboratory in a galaxy far from this one.  It was called the “Arcadia Regeneration Company”. [i] (Footnote)  I was a biological engineer working with a large staff of technicians.  It was our business to manufacture and supply new life forms to uninhabited planets.  There were millions of star systems with millions of inhabitable planets in the region at that time.

There were many other biological laboratory companies at that time also.  Each of them specialized in producing different kinds of life forms, depending on the “class” of the planet being populated.  Over a long span of time these laboratories developed a vast catalogue of species throughout the galaxies.  The majority of basic genetic material is common to all species of life. [ii] (Footnote)  Therefore, most of their work was concerned with manipulating alterations of the basic genetic pattern to produce variations of life forms that would be  suitable inhabitants for various planetary classes.

The “Arcadia Regeneration Company” specialized in mammals for forested areas and birds for tropical regions.  Our marketing staff negotiated contracts with various planetary governments and independent buyers from all over the universe.  The technicians created animals that were compatible with the variations in climate, atmospheric and terrestrial density and chemical content.  In addition we were paid to integrate our specimens with biological organisms engineered by other companies already living on a planet.

In order to do this our staff was in communication with other companies who created life forms.  There were industry trade shows, publications and a variety of other information supplied through an association that coordinated related projects.

As you can imagine, our research required a great deal of interstellar travel to conduct planetary surveys.  This is when I learned my skills as a pilot.”

Airl – Officer, Pilot and Engineer with The Domain Expeditionary Force. from the Top Secret military transcripts published in the book ALIEN INTERVIEW

“One of the birthplaces reported for Zeus is Mount Lycaeum in Arcadia. Lycaon, a cannibalistic Pelasgian king, was transformed into a werewolf by Zeus. Lycaon’s daughter was Callisto. It was also said to have been the birthplace of Zeus’ son, Hermes.

Arcadia remained a rustic, secluded area, and its inhabitants became proverbial as primitive herdsmen leading simple pastoral unsophisticated yet happy lives, to the point that Arcadia may refer to some imaginary idyllic paradise.

The Latin phrase Et in Arcadia ego which is usually interpreted to mean “I am also in Arcadia” or “I am even in Arcadia” is an example of memento mori, a cautionary reminder of the transitory nature of life and the inevitability of death. The phrase is most often associated with a 1647 painting by Nicolas Poussin, also known as “The Arcadian Shepherds”. In the painting the phrase appears as an inscription on a tomb discovered by youthful figures in classical garb. It has been suggested that the phrase is an anagram for the Latin phrase “I! Tego arcana Dei”, which translates to “Begone! I keep God’s secrets.”

“The Genetic Core of the Universal Ancestor

Molecular analysis of conserved sequences in the ribosomal RNAs of modern organisms reveals a three-domain phylogeny thatconverges in a universal ancestor for all life. We used the Clustersof Orthologous Groups database and information from publishedgenomes to search for other universally conserved genes that havethe same phylogenetic pattern as ribosomal RNA, and thereforeconstitute the ancestral genetic core of cells. Our analyses identified a small set of genes that can be traced back to the universalancestor and have coevolved since that time.

As indicated by earlierstudies, almost all of these genes are involved with the transferof genetic information, and most of them directly interact withthe ribosome. Other universal genes have either undergone lateraltransfer in the past, or have diverged so much in sequence thattheir distant past could not be resolved. The nature of the conservedgenes suggests innovations that may have been essential to thedivergence of the three domains of life. The analysis also identifiedseveral genes of unknown function with phylogenies that trackwith the ribosomal RNA genes. The products of these genes arelikely to play fundamental roles in cellularprocesses.”