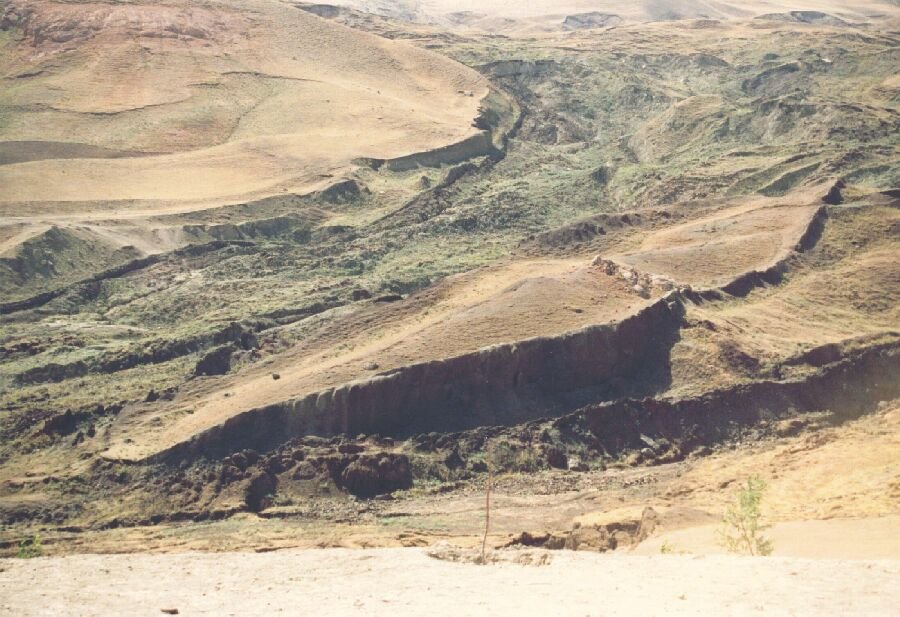 According to the Holy Scriptures, it is known that Noah made an ark of solid gopher wood and built it like modern ships. The ark had three decks with bulkheads and interiors, and its hull was tarred outside and inside.

This rescue vessel had very specific dimensions: it was 300 cubits (about 135 meters) long, 50 cubits (about 25 meters) wide and 30 cubits (about 15 meters) high. Students at the British University of Leicester made calculations and found that approximately 70,000 animals could enter such a ship.

According to numerous legends, the ark “on the seventeenth day of the seventh month” moored “on the mountains of Ararat”, the peaks of which, appearing from the water, were found by a dove.

Now Ararat is called a huge mountain range, which reaches 130 kilometers in length. It is located on the border of Iran (Persia) and Armenia, but most of it with two snowy peaks lies within Turkey. The height of Ararat reaches 5,165 meters from sea level or 4,365 meters from the foot of the mountain to its top.

Mount Ararat can only be considered conditionally – in fact, it is an active volcano with two craters, which last erupted in the 19th century – then melt water penetrated into the crater of Big Ararat, which caused a thermal explosion.

The history of the search for the ark, thanks to which mankind was saved, excites the minds of people for the last two centuries. Until the beginning of the 19th century, local residents – Persians, Kurds and Armenians believed that it was impossible to climb the sacred mountain.

In 1828, according to the Turkmanchay peace treaty, Ararat passed from Persia to Russia, and the German Johann Parrot first ascended the summit. Over the course of a century, the ark on the mountain was seen three times – once it was reported by a shepherd, the second time by the Turks (1833), and the third time by the English climber James Bryce, who reported that he found wooden remains at an altitude of 4000 meters.

According to unverified data, in 1916 a Russian expedition ascended Ararat, which reported that the ark was found in the saddle between the peaks of Ararat according to photographs taken by pilot Vladimir Roskovitsky. Allegedly, in the same year, a certain American, Colonel Alexander Coor, also visited the site.

But the materials of the expedition disappeared during the revolutionary events, and in 1921 Ararat withdrew to Turkey, and its northern slopes became inaccessible to the Russians.

But the Turks prohibited access to Ararat and other researchers, moreover, they did it in the most unexpected way. During the Cold War, Ararat was closed to expeditions, but spy planes of the United States hovered over it every now and then, watching the border of the USSR.

The American Christian astronaut James Irving, who visited Ararat, devoted several years to the search for the ark, and according to rumors, in 1982 he found the remains of the ark, but the Turkish authorities prohibited further research. Irving took this as a sign from God that the search should be stopped.

Climber from Milan Angelo Palego, who visited the mountain 15 times, told the researcher from Yerevan Ashot Levonyan that in the summer of 1989 he found a ship at an altitude of 4000 meters, but when in 2000 he gathered an international expedition to examine the find, the Turks forbade the climb …

In 2003, they denied access to the mountain to Russian explorer Andrei Polyakov. What caused locked?

They do not want conflicts with the Kurds

The Turks themselves refer to the fact that warlike Kurds are operating on the slopes of Ararat, who kidnap tourists and demand a ransom for them. In the late 1920s, there was even the Ararat Kurdish Republic, which ceased to exist in 1930.

There are indeed Kurdish settlements at the foot of the mountain; they even organized the Noah’s Ark Museum there. The Kurds venerate the mountain as Sacred, and the Christian and Muslim Kurds have no doubt that somewhere on the slopes of the mountain lies an ark.

Kurds believe that this is their mountain, call Noah Nuh and consider themselves the successors of the Old Testament history.

Do not want to conflict with the Armenians

Perhaps the Turkish authorities understand that Ararat, as a recent “gift” of the Bolsheviks, belongs to them without impressive grounds. The volcano is still a symbol of Armenia, and the Turks even tried to dispute the fact of the image of the mountain on the coat of arms of the Armenian SSR, but they failed: the mountain is still on the coat of arms of the country.

According to Islamic prophecies, the ark of the biblical Noah will be found just before the end of the world, and perhaps that is why the authorities of the Muslim country are in no hurry to give the green light to the search. Perhaps that is why it is almost impossible to get to the northern side of the volcano, on which the ark is supposedly located.

No matter what happens

Perhaps the Turks are tired of the attention to the mountain, which is located in the border zone, the entrance to which is only by passes. Perhaps they do not want to bear the costs of the rescue operations of climbers who have lost their way or caught in bad weather.

The kidnapping or disappearance of athletes from America, Europe or Russia in such an area could harm the country’s reputation.

One way or another, but in the XXI century Ararat is open only once a year, in August. Certified climbers can follow a single route on the southern side of the mountain, which is guarded by the Turkish military, but on which you will definitely not find an ark. Tourists have no other ways to get to the mountain.

Store it for the Americans

However, the well-known Russian researcher in search of the ark, says that the mountain is closed for European, Russian and Armenian scientists, but not for Americans. He is sure that Ararat will be examined by the Americans. Led by Professor Bright, they search at an altitude of 4,000 meters and above and drill the ice in search of Noah’s Ark.