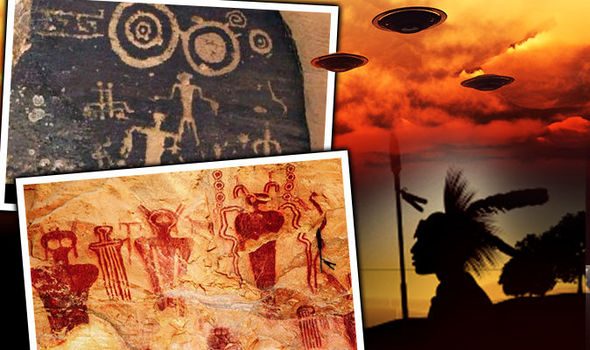 Amazing cave paintings by Apache Indians which date back thousands of years, appear to show aliens and UFOs, according to supporters of the popular “ancient aliens” theory. Could this be proof extraterrestrials visited our human ancestors and built ancient monuments?

The theory says out of this world beings are depicted in ancient artwork across the globe including by the Egyptians, South Americans and Aborigines in Australia.

Some also claim that due to unanswered questions about how monuments like Stonehenge in Wiltshire, the Pyramids of Giza in Egypt, and a 1,000-year-old interlocking stone fortress outside the Inca capital of Cusco in Peru were built, they could have been aided by the advanced technology of visiting aliens.

In Peru, the 800 long and straight Nazca Lines, which feature 300 geometric shapes and 70 figures of animals, are another creation of wonder linked to ancient ETs.

Several American Indian tribes have also long referred to spiritual and friendly “star people” or “star beings” visiting their ancestors in flying craft and passing on their knowledge.

The Hopi, from Arizona, talk of “flying shields” in the third stage of the world.

They say we are currently in the fourth stage.

They also refer to “ant people”, that appear similar to the traditional image of an ET in rock carvings, who led their ancestors to safety.

The Zuni people from New Mexico talk of ancestors who came from the sky in their belief system.

A Native American cave drawing at Legends Rock in Wyoming, USA, is said by many to depict an alien-like figure.

The site contains more than 280 petroglyphs, some of which are thought to date back 10,000 years. 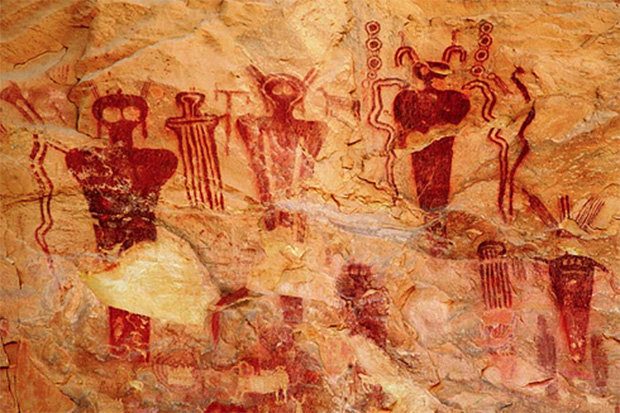 One UFO hunter posted online: “Have you seen this stuff? What are they? Why would Native Americans be sticking in aliens and spaceships in their art of they hadn’t seen them… and they are not the only ones who did it if you look at the hieroglyphics and other stuff!!”

A rock painting at Cayuse Creek in Idaho shows a rocket-like object with smoke and flame trailing behind it and a humanoid figure inside the rocket.

And, cave paintings date as far as 5,000 BC in the Sego Canyon area of Utah by Anasazi and Fremont Native Americans show strange beings with large eyes and craniums, Dailystar.co.uk reports.

Richard Wagamese, of the Wabaseemoong First People in Ontario near the US-Canada border, said: “My people tell of Star People who came to us many generations ago.

“The Star People brought spiritual teachings and stories and maps of the cosmos and they offered these freely.

“They were kind, loving and set a great example.

“When they left us, my people say there was a loneliness like no other.”

Author Stephane Wuttunee, who is from the Cree first nations in Canada, said that growing up he often heard of distant relations and Star People living among the stars.

He said: “In all honesty, the only time I was exposed to aliens per se was when I would go to the outhouse and read the Weekly World News or National Enquirer.

“It wasn’t until my later teens that I discovered that people from the dominant cultures were talking about the same people as my elders did, though each side’s sense of perception of these people seemed radically different from one another.”

However, sceptics say that ancient art also includes depictions of dragons and other mythical creatures, and this does not mean they existed.

They also argue that humans were often depicted in weird and wonderful ways in rock and other historic art work.

Advertisement. Scroll to continue reading.
In this article:aliens, apache indians