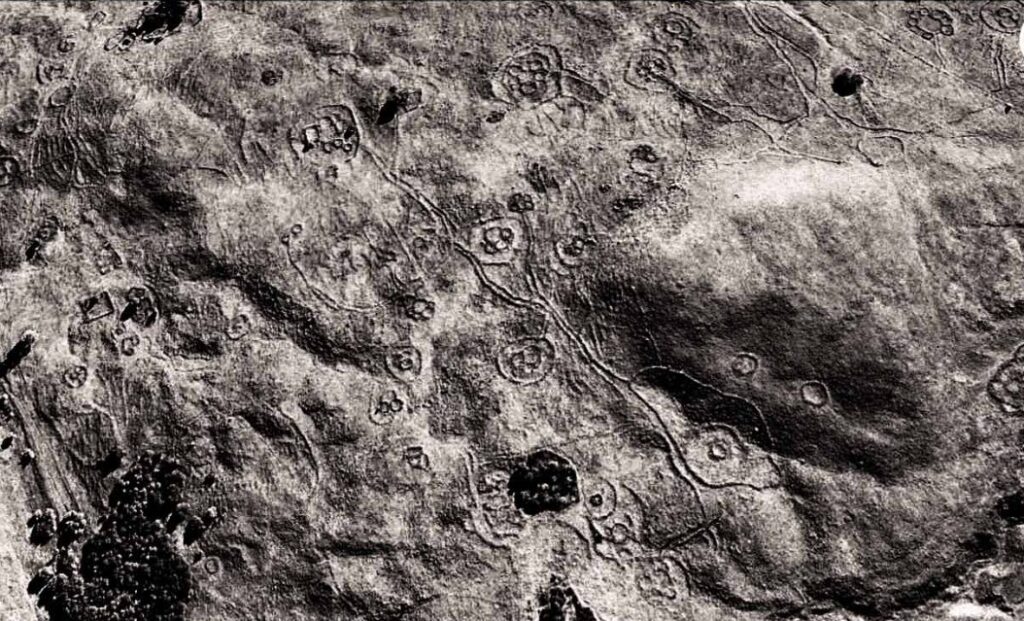 Something amazing was discovered in one of the regions of South Africa. These are the remains of a large metropolis, whose area, by modest standards, is about 1,500 square kilometers.

They were always there, people noticed them before, but no one could remember who made them and why. Until recently, no one knew how many there were, now they are everywhere, there are thousands of them; no, hundreds of thousands!

The story they tell is the most important story of humanity, but one they don’t want to hear.

That changed when explorer and writer Michael Tellinger teamed up with Johan Heine, a local firefighter and pilot who had flown over the region for years, observing the ruins. Heine had a unique advantage: he saw the number and scope of these strange stone foundations and knew their importance.

When Johan introduced me to ancient stone ruins in southern Africa, I had no idea about the incredible discoveries made in a year or two, the photographs, artifacts and evidence that no doubt accumulated by a lost and never seen civilization that predated all others, not for several hundred years, not for several thousand years, for many thousands of years. And these discoveries are so amazing that they are not easily digested by the current historical fraternity. It will require a complete paradigm shift in how we view our human history.

In the words of Michael Tellinger:

Thousands of ancient gold mines discovered over the past 500 years point to a lost civilization that has lived and mined gold in this part of the world for thousands of years. And if this is indeed the cradle of humanity, perhaps we are observing the activities of the oldest civilization on Earth.

This place is about 150 km from a superb port where sea trade could help support such a large population, but remember that we are talking about a metropolis almost 200,000 years ago.

Some ruins of the metropolis, mostly stone circles, were buried in the sand and are visible only from a satellite or from an airplane. Some have been eroded by sand melting, exposing walls and foundations.

When explorers first encountered these ruins, it was assumed that they were built by nomadic tribes such as the Bantu people as they moved south and populated the land throughout the 13th century.

In early history, there was no record of any civilization capable of building a larger, populous community. Little effort was made to explore the site because the size of the ruins was not fully known.

Over the past 20 years, people like Kirill Gromnik, Richard Wade, Johan Heine and others have discovered that these stone structures are not what they seem. In fact, it is now believed that the age of the ruins of ancient temples and astronomical observatories of a vanished ancient civilization is hundreds of thousands of years.

The circular ruins stretch over a huge area and can only be truly appreciated from the air or with the help of modern satellite imagery. Many of them are almost completely destroyed or covered with soil due to agriculture and climate change. Some of them have survived quite well, demonstrating large dimensions: the original walls in some places reach almost 1.5 meters in height and more than a meter in width.

As for the entire city, or metropolis, it is obvious that it was a well-planned community, created by a highly developed civilization. The number of ancient gold mines suggests why the community chose this site.

Roads have been found, some of which stretch for hundreds of kilometers, connecting settlements and terraced agriculture, very similar to those found in Inca settlements in Peru. But the answer to the question has not been found: how could this have been achieved by humans 200,000 years ago?

When science is silent

The explanation for this mystery can still be found, however, not among the official scientific postulates, but among others. The theory of ancient astronauts, Zecharia Sitchin, which speaks of the Anunnaki and their “mining work” on Earth, points to a possible explanation for this ancient metropolis.

This is Sitchin’s theory, which speaks of time and civilization that existed on Earth long before all officially recognized ones, such as Egyptian, Sumerian and so on. According to the generally accepted version of human history, the first civilization on Earth was the Sumerian, which appeared in southern Mesopotamia in 5000 BC.

According to Sitchin’s theory of ancient astronauts, the history of the Earth begins with the arrival of the Anunnaki on our planet, approximately 450,000 BC.

Zecharia also claims that the Anunnaki came to Earth in search of gold, which they needed to “restore” the atmosphere on their home planet – Nibiru. Long and difficult wars on Nibiru damaged the atmosphere, which began to threaten their lives.

Advertisement. Scroll to continue reading.
In this article:Africa, Anunnaki