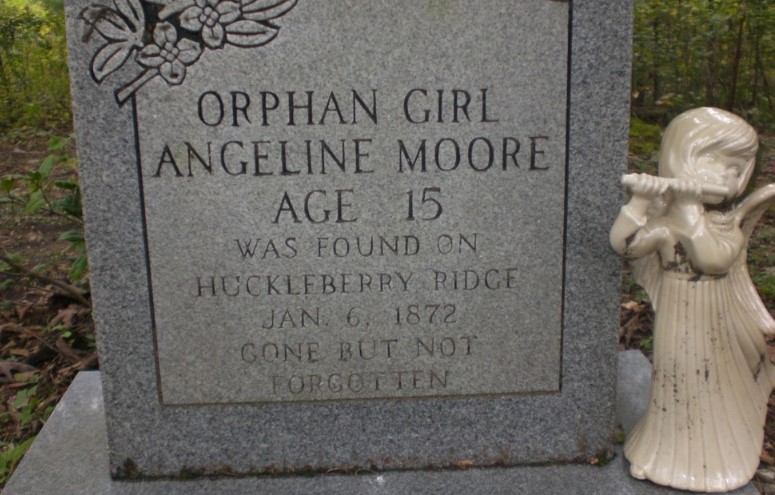 Fifteen-year-old Angeline Moore’s body was found beaten to death on Huckleberry Ridge, not far from Station Camp, on January 6th, 1872.

Although her tombstone calls her an “orphan girl,” that is actually incorrect and her mother was alive and well and living in Kentucky.

Angeline had in fact been bound to a woman named Keziah Thompson, who lived near Huntsville. When the body was discovered, nearly fourteen miles beyond Huntsville, it presented a horrific appearance to those that discovered her body.

One eye was mashed in, the collar bone dislocated, and several ribs were broken, and bruises innumerable bore evidence of the most inhuman treatment. It was because of this that her body wasnt at first recognized and why when she was interred her tombstone was inscribed with the words “orphan girl”.

The Knoxville Daily Chronicle described the finding of Angeline’s body in the following way:

“The body bore evidences of brutality and inhumanity at the contemplation of which a demon might shudder. The affair has caused intense excitement. When found, the body was on a small path near the road. Her collar bone and one rib were broken. The left eye was mashed in, apparently by a severe blow, and the entire body, most horribly mutilated, bore witness to refined cruelty, which is at once sickening and a burning shame to advanced civilisation.”

Initially, her body was simply buried. Soon afterwards, however, the disappearance of Angeline Moore became known, and her body was disinterred and a coroner’s inquest was held. The body was recognised as that of the missing girl, and suspicion soon pointed to widow Mrs. Keziah Thompson, to whom the dead girl had been bound.

It was rumoured that the girl had been subjected to severe and cruel treatment, so inhuman that she was not given necessary clothing and shelter and in consequence had her fingers and toes badly frozen.

This led to a second degree murder indictment against Mrs Thompson and her daughter Sallie. A jury was unable to convict her however, resulting in a mistrial, and the two women were never tried again for the crime.

The only motive that could be given was by neighbours, who suggested the possible reason for the murder of Angeline Moore, by Mrs. Thompson and her daughter, is that some property held by them would in a short time, have reverted to the girl, and they, perhaps, wishing to avoid parting with it murdered her.

It is thought that Mrs. Thompson and her daughter took Angeline’s body at night fourteen miles into the mountains, in order to avert suspicion from herself.

In this article:Angeline Moore, orphan girl