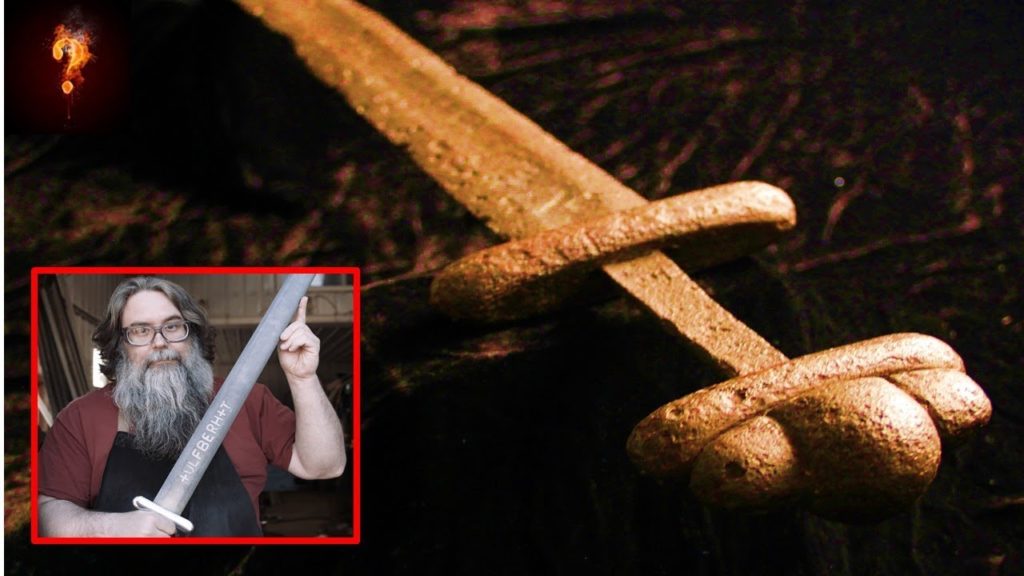 A group of medieval swords found within Europe, dating between the 9th through 11th centuries, the blades faces are inlaid with the inscription “Ulfberht,” with a cross on either side.

The word turns out to have been a Frankish personal name, it somehow became the basis logo, a trademark of sorts, used by multiple blade smiths for several centuries, in their impressive attempts to make the hardest, most impressive swords of the era.

About 100 to 170 Ulfberht swords are known to exist, yet the origins of the name remains somewhat of an enigma, however, we dare to postulate that the name may have originated with this sword in particular…

A sword which these blade smiths may have been attempting to replicate and indeed figure out how it was made.

A NOVA, National Geographic documentary titled “Secrets of the Viking Sword”, which first aired in 2012, actually took a look at this enigmatic sword’s metallurgic composition…

The Ulfberht sword has almost no slag content within its composition, and it has a carbon content three times that of other metals from the time, carbon found to be a great addition in strengthening steel, creating a metal known as “crucible steel.” A critical discovery, something which made England famous some 800 years after this swords creation.

In the process of forging iron, the ore must be heated to 3,000 degrees Fahrenheit this will bring the metal to a liquid molten state, allowing blacksmith to remove impurities called “slag.

However, medieval technology did not allow iron to be heated to such a high temperature, thus the slag was removed by pounding it out, a far less effective method.

It is thought that furnaces invented during the industrial revolution, were the first capable of heating iron to an extent capable of removing most slag from its composition.

Modern blacksmith Richard Furrer of Wisconsin, spoke to NOVA about the difficulties of making such a sword.

Furrer is described in the documentary as one of the few people on the planet who has the skills needed to try to reproduce the Ulfberht by hand.

“To do it right, it is the most complicated thing I know how to make,” he said.

He commented on how the Ulfberht maker would have been regarded as possessing magical powers.
“To be able to make a weapon from dirt is a pretty powerful thing,” he said.

But, to make a weapon at this time within history, that could bend such without breaking, stay so sharp, and weigh so little, would be regarded as supernatural.

The tiniest flaw or mistake turning the sword into a piece of scrap metal. He declared his success at the end as more relief than joy.

Who was the maker of this sword?

How did they know how to make it?

The mysteries surrounding this out of place artefact persists to this day.

In this article:ancient sword, Ulfberht sword