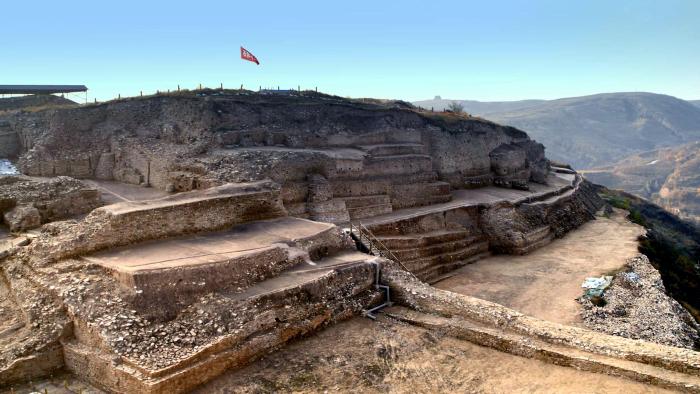 In China, archaeologists in the north of Shaanxi province excavated the city of Simao, previously unknown to science, which possessed not only the most powerful fortress walls, but also a huge pyramid built at the same time as the Great Pyramid in Egypt.

The details of this discovery, already called one of the greatest in archeology in China, are given by National Geographic magazine. For many years, the ruins of this city were considered part of the Great Wall of China. And only the excavations carried out in recent years proved that it was a separate city, and very powerful.

It all began with the fact that local residents began to find jade discs, blades and a scepter in the ruins. But there is no jade in this region. The very first field season allowed the excavation of the powerful fortress walls. Later it turned out that they surrounded a massive pyramid 70 meters high.

Carbon dating has determined that Shimao (as the place is now called, but the original name of the city is unknown) was built about 4,300 years ago, that is, almost 2,000 years before the construction of the most ancient section of the Great Wall and 500 years before the Chinese civilization settled. in the Central Plains.

The pyramid is practically the same age as the city, that is, it was built at the same time as the Great Pyramid at Giza, but was half the size. Its purpose was completely different. This city was built on the hills above the Tuway River. Bloody wars have been going on in this region for thousands of years. Therefore, the city was powerfully fortified.

The pyramid, according to scientists, was one of the elements of defense. It was erected on the highest of the hills, it consisted of 20 tiers and was clearly visible from anywhere in the city. The upper tier was arranged for living, and it was probably used only by the elite.

The upper tier included a luxurious complex with an area of ​​about 81 thousand square meters. m. with its own water tank, craft workshops and temples. Researchers believe that no one lived there permanently. But during the wars, the elite rose to the upper tier to protect themselves from the enemy.

From the Simao pyramid, kilometers of various walls spread out in all directions throughout the city, forming a powerful defensive line. Scientists estimate that only 125,000 cubic meters of stone were needed to build these inner city walls. This compares to the combined volume of the 50 Olympic swimming pools.

How the people of the Neolithic were able to solve the difficult task of construction is still a mystery. According to archaeologists, the population of the city was from 10 to 20 thousand people. At the same time, the city was huge in its time.

It is estimated that the total length of the fortress walls exceeded 10 km. The city had a large sanctuary decorated with frescoes and jade artifacts. In it they found terrible evidence of human sacrifice. Also, archaeologists have discovered 70 stunning relief sculptures made of stone – snakes and mythical monsters.

They resemble the iconography of the late Bronze Age in China. Interestingly, there is no mention of this city in any written source or oral legend. Meanwhile, Simao is currently the largest known settlement of the Neolithic era in China – its area exceeds 4.04 thousand hectares.

In this article:China, Shimao pyramid