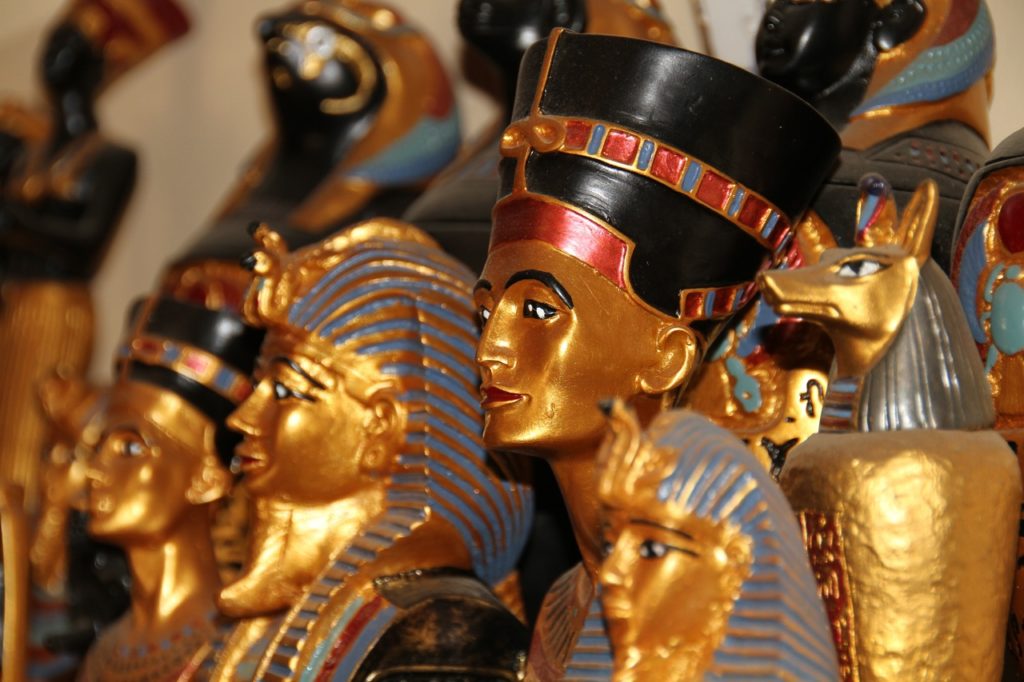 From its inception, ancient Egypt was defined by its religious beliefs. Worship of all powerful deities was part of the daily life, and ancient Egyptians believed that when they died they would enjoy an afterlife. Its pharaohs, kings who were regarded as gods, controlled the vast resources of the kingdom, using them to build architecture on a grand scale and tombs filled with beautiful objects.

Here we’ll focus on some main Egyptian figures and objects and their symbolic meaning. Depicted as a falcon or as a man with a falcon’s head, Horus was a sky god associated with war and hunting. He was also the embodiment of the divine kingship, and in some eras the reigning king was considered to be a manifestation of Horus.

As the wife of the god of the underworld, Isis was also one of the main deities concerned with rites for the dead. Along with her sister Nephthys, Isis acted as a divine mourner, and her maternal care was often depicted as extending to the dead in the underworld.

Anubis was shown as having the head of a jackal, the tail of a lion and the body of a human. Sometimes drawings showed him as a full jackal. He was often seen with a golden tie or necklace. Anubis’s jackal head was often shown to be black. The reason for this was to show his link to death.

Cats were kept as household pets and as animals sacred to Re and to the fertility goddess Bastet.

In her earliest forms, the cat goddess Bastet was represented as a woman with the head of a lion or a wild cat. In later periods she was often represented as a regal-looking seated cat, sometimes wearing rings in her ears or nose.

A sphinx is a mythical creature with the body of a lion, most often with a human head and sometimes with wings. The creature was an Egyptian invention and had a male head – human or animal

A Pharaoh was the most important and powerful person in the kingdom. He was the head of the government and high priest of every temple.The people of Egypt considered the pharaoh to be a half-man, half-god.

Most pharaohs were men but some well-known pharaohs, such as Nefertiti and Cleopatra, were women. No monument has raised man’s curiosity as much as Egyptian pyramids. Their shape, their mass, their meaning and the secrets of their construction arouse interrogations among beings in quest of knowledge and put the shrewdness of the archaeologists to great tests.

Each ancient Egyptian obelisk was carved from a single piece of stone which was then moved to its location and raised onto a base. While archaeologists and scholars understand how these monuments were carved and transported, no one knows how they were raised; modern day efforts to replicate the raising of an obelisk, using ancient Egyptian technology, have failed.

Egypt is often called ‘the gift of the Nile’, and ancient Egypt owed much to the river.

Boats were the most important form of transport in Ancient Egypt and vital for travel and trade. It is not surprising that the boat held much meaning to the people of Ancient Egypt, becoming an important part of religious beliefs and visions of the afterlife.

The Egyptians considered that death was just a interruption n a life that continued from the birth to eternity. In order to enjoy the afterlife, however it was necessary that the body should be reserved and sustained. It was therefore mummified.

A human shaped coffin not only housed the mummy, but also replace it if the mummy were destroyed or damaged.

Jars used by ancient Egyptians to hold mummified remains. During the mummification process the organs of the human body were removed and preserved separately in canopic jars. The sarcophagus of the cat of the Crown Prince Thutmose, the eldest son of Amenhotep III and Queen Tiye. (Image Source)

Egyptians were actually aware of the natural world around them. Many of their deities had an animal aspect, so animals featured prominently in Egyptian art.

The Egyptian dung beetle patiently rolling a ball of dung many times its size, came to symbolise resurrection. It was popular in amulets.

Cats were very important animals in Ancient Egypt, they were both pets and symbols of cat gods such as Bast. The domesticated cat was a symbol of grace and poise because of the way it hunts its prey.

The Egyptian jackal was regarded as somewhat sacred by the ancient Egyptians. So much so that one of their main and most important gods Anubis beheld the head of a jackal.