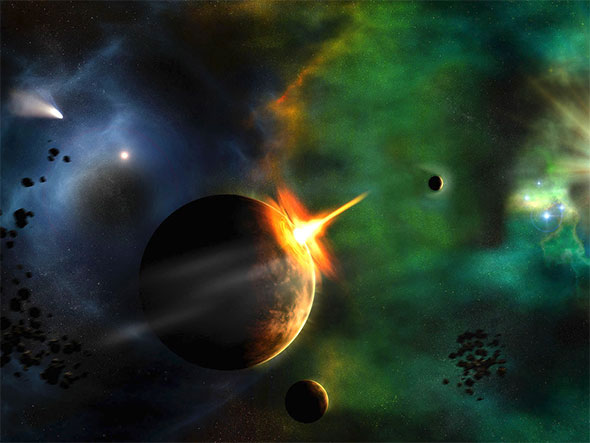 …”As an alternative to these nineteenth-century mechanisms, we have considered Directed Panspermia, thetheory that organisms were deliberately transmitted to the earth by intelligent beings on another planet. We conclude that it is possible that life reached the earth in this way…“ — Nobel Laureate, Sir Francis Crick & biochemist Leslie Orgel

In the early 1970’s, while Erik van Daniken was presenting the material to back up his Ancient Astronaut thesis in such books as “Chariots of the Gods”, another virtually as yet unknown theory was being presented by several, world renown scientists.

The above scientists first proposed their novel theory in a paper presented in 1973. They gave it the name Directed Panspermia because the ancient Greek philosopher, Anaxagoras first presented the idea that life on earth arrived here from space. He called his theory Panspermia, which simply means ‘seeds everywhere’.  Anaxagoras proposed that the seeds of life were existent throughout the universe and simply landed on planets now and then. Crick and Orgel took that notion a giant step further by positing that an advanced race directed the seeding operation on earth.

Sir Francis Crick was not a lightweight scientist who could be dismissed readily. In fact, the noted microbiologist received the Nobel Prize for being the co-discoverer of the DNA molecule in the early 1950s. His credentials were unimpeachable. The same is true for biochemist Leslie Orgel who is credited with having discovered the RNA-world. In their paper they argued that the first organisms that appeared on earth were too complex to have originated on the planet in such a short time. (This argument was later picked up by the Intelligent Design theorists.) The pair showed that Darwin’s ‘spontaneous generation’ concept had been debunked by Luis Pasteur and other scientists in the 19th Simply put, Darwinism cannot be used to explain how life emerged on earth.
Not only had there been too little time for a chance-driven process like evolution to have produced life, the pair argued, “it is a little surprising that organisms with several different codes do not coexist. The universality of the code follows naturally from an “infective” theory of the origins. Life on Earth would represent a clone derived from a single extraterrestrial organism.”

In other words, if chance events produced the largely uniform DNA code, how could it have occurred with such perfection on a one-time-through basis? Why had Nature not failed at least once or twice before getting it right? But that is not the way life emerged and proceeded. The DNA code appears to have arrived on earth in a fully tested and preformed basis.

Now Crick and Orgel also predicted that if their theory were correct that many earth-like planets should exist in the universe. This prediction was made long before the Kepler Telescope began century reporting the existence of earth-like planets circling suns similar to ours, which began several years ago and continues today.

They wrote, “…that in the galaxy many stars, a size not dissimilar to our Sun, and planets, exist on a fair fraction of which temperatures are suitable for a form of life based on carbon chemistry and liquid water, as ours is.”

In fact, there is no reason to assume that the earth is exceptional, and the majority of modern astronomers do not make that assumption. Most agree that intelligent life exists out there somewhere. But, the catch is, that they do not believe that any advanced civilization has ever contacted or arrived on earth. Even though Crick and Orgel argued that, in theory, “…if we are capable of infecting an as yet lifeless extra-solar planet, then, given that the time was available, another technological society might well have infected our planet when it was still lifeless…”

They too made the assumption that there was no viable evidence that any civilization had actually visited the earth.

Nonetheless, van Daniken was igniting the public’s imagination by presenting a vast body of evidence concerning history’s mysteries. Suddenly the public was made aware of ancient sites and artifacts, which historians could not simply explain away.

It appears that Crick and Orgel, along with their peers, were making the same assumption that physicist Enrico Fermi did in the 1950’s. After studying the problem of advanced ET civilizations he concluded that – there was little doubt they existed – but there was no evidence that they ever had come to earth.  That theorem was dubbed “The Fermi Paradox”.
The fatal flaw, which none of the scientists (including Crick and Orgel) that followed Fermi failed to consider was that he never actually studied the body of evidence that does argue for ET visitation. The late astronomer, Carl Sagan was actually arguing for such scientific investigations. That, in fact, is an unforgivable breach of scientific protocol. If a scientist makes an assertion it is incumbent upon him or her to present the case for or against it. For example, Fermi never examined the Great Pyramid, which the ancient Egyptians could not have built because they lacked the tools and sophisticated techniques to build a 48-story stone structure out of millions of precision-cut stones. No truly scientific body has conducted an investigation of that structure to see if the orthodox theories of historians hold water or not. Lacking such an examination, it is impossible to back up the claim that Fermi, et al, have made and continue to make to this day. As shown above, their position is untenable by their own standards of evidence.

In fact, Crick and Orgel showed that an advanced civilization could have had ample time to evolve on a distant planet; and still have sent an unmanned craft to earth. While the pair successfully presented a valid theory for how life emerged on earth; they nonetheless failed to realize that there was plenty of evidence showing that- an advanced civilization had actually arrived on earth, in person, as well.  Nevertheless, Van Daniken and the late, Zachariah Sitchin were presenting that evidence en masse in extended book series.

Now we have to include the modern era of so-called UFO sightings and encounters into the mix. It is odd that the Ancient Astronaut theorists and the investigators of the modern UFO era have thus far failed to join forces and compare notes. In fact, it would appear that the UFO phenomenon forms a continuum that goes back into humanity’s most ancient prehistory.

Any educated, informed, thinking person knows that no ancient human civilization could do what we still cannot achieve today – and that is to build the Great Pyramid. It is a stupid, ridiculous and insulting premise that historians continue to proffer in spite of their complete failure to produce sufficient evidence to back up their claims…
But someone did build it, at some remote time; and with technology that was sophisticated enough to succeed. That is a fact. So if no ancient human civilization built it, then who is left?
Of course only ancient astronauts, ostensibly, Crick’s and Orgel’s advanced ET civilization, which even they failed to see, not only sent unmanned craft but full-blown spaceships that landed on earth. That is who built it.

The Egyptians never claimed that they built the pyramids and no mummy has ever been found in the 103 large pyramids that were constructed.

In fact, no ancient civilization took credit for having created civilization, they all agreed that ‘gods’ arrived from the heavens and gave them the arts, tools and principles of advanced society.

Those amazing spacecraft that have been soaring through our skies since the dawn of the nuclear age, may be delivering a message: ‘you are not alone and you do not own this planet’.

We may be getting a wake- up call, but are our leaders and scientists paying attention?

There are thousands of well-documented cases that prove that UFO’s exist and are not of this earth.
These reports have been filed by pilots, military personnel, on-duty policemen and even scientists.

Things have advanced so rapidly since 1972 that our space scientists already have plans that detail how humans will one day be terraforming another planet, Mars perhaps.

There is nothing extravagant or unscientific about the Ancient Astronaut theory or the visitation of ET’s in our skies today….

Now, consider this possibility: our leaders and scientists already know all of this, and more, but you and I are being kept in the dark about what NASA, archaeologists and geneticists have actually discovered…

Copyright 2014 by Will Hart

In this article:Directed Panspermia, DNA, The Fermi Paradox