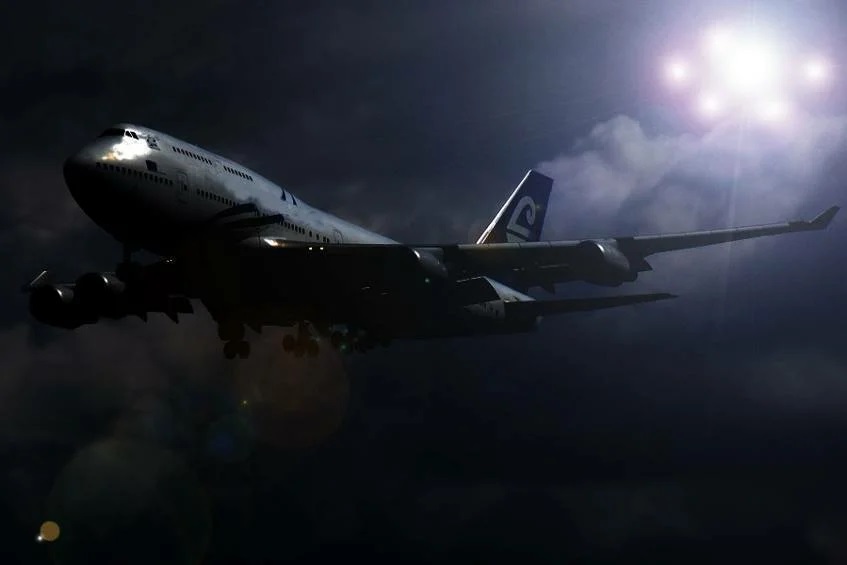 It was a normal flight. Well, not quite a routine…. It was Japan Air Lines special cargo flight 747 that carried a shipment of French wine from Paris to Tokyo. The flight plan was to include flight 1628 from Paris to Reykjavik, Iceland, via the North Atlantic and Greenland, then via Canada to Anchorage in Alaska, and finally across the Pacific Ocean to Tokyo. The crew included veteran captain Kenju Terauchi, co-pilot Takanori Tamefuji and flight engineer Yoshio Tsukuba.

On November 16, 1986, loaded with wine, JAL1628 took off from Paris and made the first leg of the journey to Reykjavik. The next day, they continued their flight over Greenland and then through northern Canada without any event.

Immediately after they crossed the Alaska border at 5:09 pm local time, Anchorage air traffic control contacted them by radio to report the first radar contact. The flight controller of Anchorage asked them to turn 15 degrees to the left and head towards a point known as Talkeetna on a course of 215 degrees. They were at an altitude of 35,000 feet and were traveling at about 600 miles per hour.

At about 5:11 pm local time, Captain Terauchi noticed the lights of some aircraft about 2,000 feet below and 30 degrees to their left. He figured it was probably an American jet fighter from nearby Eilson or Elmendorf airbases patrolling Alaska airspace, so he ignored them at first. However, after a few minutes, he noticed the lights were keeping up with his own aircraft, which would be unusual for patrol aircraft.

It has been about seven minutes since we started paying attention to the lights (when), in the most unexpected way, two spaceships stopped in front of our face, “shooting” lights. The interior cabin shone brightly and I felt warmth in my face.

Terauchi said he had the impression that two objects he saw below them a few minutes ago suddenly jumped out of him. The ships, one above the other, kept pace with the Boeing 747 for several minutes, moving in unison with a strange sway. After about seven minutes, they switched to a side-by-side arrangement.

Terauchi said the “amber-whitish” lights were like flames coming out of several rocket exhaust windows arranged in two rectangular rows on the ship. He felt they were firing in a specific sequence to stabilize the ship, much like the small, maneuverable engines on the space shuttle. He also reported seeing sparks similar to fire when using gasoline or coal fuel.

Co-pilot Tamefuji described the lights as “Christmas platter” with a “salmon” color.

“I remember a red or orange and white landing light, as well as a landing light. And a faint green, ah, flashing.”

The lights “swayed” in unison, as if two planes were standing side by side, “very good formation … close.” He described the appearance of the lights as similar to a “head-on night flight” vision, where only the lights of an approaching aircraft can be seen, but “we cannot see the general shape.”

“I’m sure I’ve seen something.”

It was clear enough to make me believe that an airplane was coming.

Flight Engineer Tsukuba, seated behind the co-pilot, could not see the lights so clearly. He first saw them “through window L1 at 11 o’clock and saw “undulating clusters of lights.”

These clusters were “made in two parts … in the form of airplane windows.” He stressed that “the lights in front of us were different from the city ones.” He described the colors as white or amber.

Tamefuji decided to call Anchorage Air Traffic Control, and for the next thirty minutes the Boeing 747 and the AARTCC were in constant contact about UFOs.

At this time, Captain Terauchi asked Tskububa to hand him a camera so that he could try to photograph the lights. However, Terauchi was unfamiliar with the camera and could not get it to work. Tsukuba was also unable to get his camera to work due to autofocus issues and finally gave up trying to take a picture.

At this point, they began to experience some radio interference, and Anchorage asked them to change frequencies. Terauchi later said that Anchorage kept asking him about clouds in the immediate vicinity: they asked us several times if there were clouds at our height. We saw thin speckled clouds near the mountain below us, with no clouds in the air from mid to top, and the airflow was steady.

Shortly after talking about clouds, objects flew to the left. Terauchi later said:

“In the direction where the ships were leaving, there was a pale white flat light, they were moving with us in the same direction, at the same speed and at the same height as us.”

Terauchi decided to see if they were seeing anything on their own 747 radar:

I thought it would be impossible to find anything on the aircraft radar if the large ground radar showed nothing, but I estimated the distance to the object visually and it was not very far. I set the digital weather radar to 20 (nautical) miles, the angle of the radar to the horizon (i.e. no deflection angle). This was on the screen. A large green and circular object appeared 7 or 8 miles (13 to 15 km) in the direction the object was.

We informed downtown Anchorage that our radar had caught an object within 7 or 8 miles at the 10 o’clock position. We asked them if they could catch it on ground radar, but it looks like they couldn’t catch it at all.

At 5:25:45 am, after two minutes of searching, the military radar at the Regional Operations Center Elmendorf also picked up something. The ROCC radar controller reported back to AARTCC that it received some “pulse primary return”. By this he meant a random radar echo, not accompanied by a transponder signal.

The lights (of the city) were extremely bright for eyes accustomed to the dark (the cockpit lights were turned off to prevent internal light from reflecting in the windows.) We were just above the bright city lights and checked out the pale white light behind us.

“Alas! There was a silhouette of a giant spaceship. We must run fast! Center of Anchorage. JAL1628 asks to change course 45 degrees to the right. It seemed like a long time before we got permission.”

Immediately after the plane turned right, AARTCC dispatcher called Fairbanks control radar to see if the short-range radar had a target near the JAL. Approach radar reported no targets other than JAL1628.

The aircraft exited the turn and flew towards Talkeetna at an altitude of 31,000 feet while the object continued to follow.

At approximately 5:40 am, a United Airlines passenger plane took off from Anchorage and headed north to Fairbanks. The AARTCC controller decided to ask the UA pilot to try to see the object that was following the JAL flight. The UA pilot said he would watch when he got closer. The controller requested that the JAL flight remain at 31,000 feet and the UA flight at 29,000 feet. He then ordered UA to make a few more turns so that the planes could fly within five miles of each other.

As the United Airlines plane approached, the UFO apparently fell behind, allowing the JAL plane to fly far ahead. The United pilot asked the AARTCC for the JAL pilot to turn on the headlights on the JAL plane so he could locate the plane. At 5:49:45 am, the JAL pilot did it. At this point, the planes were about 25 miles apart.

When the planes were about 12 miles apart, UA reported seeing JAL and nothing else. But by this time the UFO appears to have disappeared, and JAL1628 did not notice it either.

At about 5:51 am, the AARTCC demanded that a TOTEM military aircraft in the area also fly towards the JAL aircraft to take a look. For the next few minutes, TOTEM watched the JAL plane, but saw no other vehicles. JAL1628 proceeded to Anchorage and landed at 18:20.

The FAA conducted an investigation into the incident and did not submit its final report until March 5.

CSICOP (Committee on Scientific Investigation of Allegations of the Paranormal) Phil Klass issued a premature statement on January 22nd claiming that UFOs were the planets of Jupiter. and Mars is an impossible solution because UFOs were seen in the opposite part of the sky to the positions of these planets, and because UFOs moved from positions on top of each other to stand side by side.

CSICOP later published a second explanation that the UFO was light bouncing off clouds of ice crystals – also unlikely because the sky was clear at the UFO’s stated altitude.

The US Federal Aviation Administration attributed the ground-based radar images as “split radar from a JAL Boeing 747”.

In this article:Flight 1628, Japan Air Lines