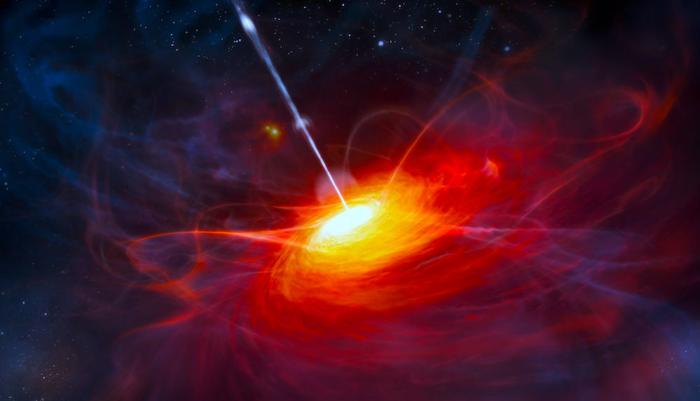 This artist’s impression shows how ULAS J1120+0641, a very distant quasar powered by a black hole with a mass two billion times that of the Sun, may have looked. This quasar is the most distant yet found and is seen as it was just 770 million years after the Big Bang. This object is by far the brightest object yet discovered in the early Universe.

An international group of astronomers from the United States, Germany, China and Chile reported the discovery of a largest quasar called Poniua’ena, which in Hawaiian means “an invisible rotating source of creation surrounded by radiance.”

The object is located at a distance of about 30 billion light years, which corresponds to the age of the Universe at 710 million years. A preprint of the article, which will be published in the Astrophysical Journal Letters, is available on the arxiv website.

The light from the quasar J1007 + 2115 flew 13 billion years, however, due to the accelerated expansion of the Universe, its redshift is z = 7.515, which corresponds to the actual distance to it, equal to 29.3 billion light years. Astronomers see the object as it was in the era of reionization, when the first stars appeared, ionizing hydrogen atoms with their light.

Poniua’ena contains a supermassive black hole whose mass reaches 1.5 billion solar masses, making the quasar the largest object in the early Universe. According to Jinyi Yang, lead author of the work from the University of Arizona, this is the earliest object of such a monstrous size known to scientists.

Its existence poses a problem for theoretical models of the formation of supermassive black holes, according to which, J1007 + 2115 simply would not have time to grow in 710 million years if it had originally arisen as a result of the collapse of the star.

Instead, astronomers believe, a hundred million years after the Big Bang, there was already a black hole with a mass of 10 thousand Suns, which was formed as a result of direct gravitational collapse of clouds of cold hydrogen gas.

Advertisement. Scroll to continue reading.
In this article:quasar J1007 + 2115