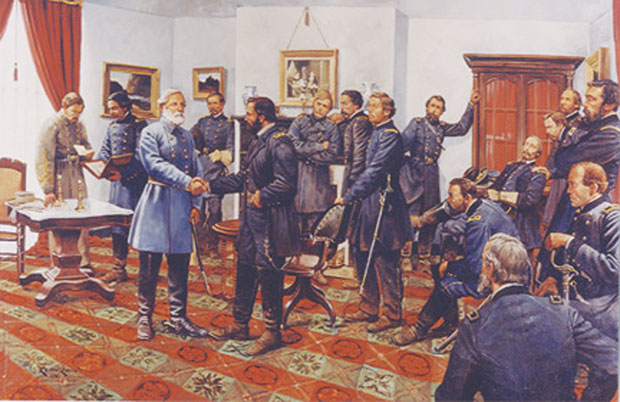 General Robert E. Lee surrendered the Army of Northern Virginia to General Ulysses S. Grant on April 9, 1865. The same year, the first crash of an unidentified flying object (UFO) was reported in the western United States. The eyewitness account, provided by a trapper named James Lumley in present-day Montana, was widely circulated in the newspapers of the day.

Lumley’s sighting predates the generally accepted 1947 inauguration of flying saucers in Roswell, New Mexico, by over 80 years, making it by far the oldest documented UFO crash. After the 1865 report, sightings of mysterious airships peaked in 1897, six years before the Wright Brothers flew at Kitty Hawk.

W. Ritchie Benedict, writing in Fate magazine, reported finding Lumley’s story in two Canadian newspapers published in 1865. These papers claimed to be reprinting a story from The Missouri Democrat, entitled: An Extraordinary Story A Meteoric Shower Crockery Failing from the Sky

“Mr. James Lumley, an old Rocky Mountain trapper, who has been stopping at the Everett House for several days, makes a most remarkable statement to us, and one which, if authenticated, will produce the greatest excitement in the scientific world. Mr. Lumley states that about the middle of last September, he was engaged in trapping in the mountains about seventy-five or one hundred miles from the Great Falls of the Upper Missouri, and in the neighborhood of what is known as Cadotte Pass. After sunset one evening, he beheld a bright luminous body in the heavens, which moved with great rapidity in an easterly direction. Visible for at least five seconds, when it suddenly separated into particles, resembling, Mr. Lumley describes it, ‘the bursting of a skyrocket in the air.’ A few minutes later, he heard a heavy explosion, which jarred the earth perceptibly, and this was shortly followed by a rushing sound, like a tornado sweeping through the forest. A strong wind sprang up about the same time, but suddenly subsided. Filling the air with peculiar odors of a sulphurous [sic] nature. These incidents would make a slight impression on the mind of Mr. Lumley, but for the fact that on the ensuing day he discovered, at the distance of about two miles from his camping place, he could see in either direction a wide path had been cut through the forest. Giant trees [were] uprooted and broke off near the ground. The tops of hills [were] shaved off and the earth plowed up in many places. Great and widespread havoc [was] everywhere visible. Following up this track of desolation, he soon ascertained the cause of it in the shape of an immense stone driven into the side of a mountain. The most remarkable part of the story is an examination of this stone and how it had been divided into compartments. In several places it was carved with hieroglyphics. Mr. Lumley also discovered fragments of a substance resembling glass, and here and there dark stains, as though caused by a liquid. He is confident that the hieroglyphics are the work of human hands, and the stone itself, is a fragment of an immense body, [which] must have [been] used for some purpose by animated beings.

“Strange as this story appears, Mr. Lumley relates it with so much sincerity that we are forced to accept it as true. It is evident that the stone which he discovered, is a fragment of the meteor which was visible in this section last September. The stone will be remembered in Leavenworth, Galena, and in this city by Col. Bonneville. At Leavenworth the stone separated into particles and exploded.

“Astronomers have long held that it is probable that the heavenly bodies are inhabited—even the comets—and it may be that meteors are also. Meteors could be used as a conveyance by the inhabitants of other planets exploring space, and it may be that hereafter some future Columbus, from Mercury or Uranus, may land on this planet by means of a meteoric conveyance, and take possession thereof—as did the Spanish navigators of the New World in 1492, and eventually drive what is known as the ‘human race’ into a condition of the most abject servitude. There must be a race superior to us, and this may at some future time be demonstrated in the manner we have indicated.”

While the conclusion of this story may sound quaint, with its references to aliens traveling through space on comets and meteors, there was the cult a few years back that committed mass suicide in order to catch a ride on a comet passing near the Earth. And there are undoubtedly still believers today.

Even though Lumley reported no evidence of survivors, the story implies the possibility. It would seem rather unlikely that a Rocky Mountain trapper would recognize hieroglyphics. It is equally doubtful that an advanced alien civilization would have developed a written language identical to man’s hieroglyphics. Unless of course one accepts the premise that aliens visited Egypt and built the pyramids and gave the natives hieroglyphics.

Lumley’s account sounds very much like a large meteorite striking the earth: a bright body moving rapidly through the darkened sky, breaking apart into particles, jarring the ground on impact, and cutting a path of destruction through the forest before imbedding itself in the side of a mountain.

Iron meteorites often appear pitted, or compartmentalized, as Lumley’s story suggests. These pits are due to rust and atmospheric friction. Iron meteorites also may contain sulfur, accounting for the odor described by Lumley. Since meteorites heat up to several thousand degrees as they pass through the Earth’s atmosphere, it would not be unusual to find elements in the Earth’s surface where the meteorite struck heated enough to form obsidian, a form of natural glass.

In an article by Dan Ahrens in 1999, he points out that the modern reports of the supposed crash in Missouri are false. As he states, “The old article clearly states that Mr. Lumley was in the Upper Missouri, which is of course located in Montana, and that he was 75 to 100 miles up from the Great Falls. This area is exactly where Cadotte Pass is located, so his recollection was very good as he reported it.”

Ahrens also points out the newspaper’s erroneous attempt to tie Lumley’s meteorite to sightings in Leavenworth and Galena, Kansas. Unfortunately, Mr. Ahrens believes that a “craft,” rather than a meteorite, crashed at the site. He further encourages the private sector to mount an investigation of the area, before “all traces just get whisked off to a government facility somewhere…never to be seen again.” An investigation would be most welcome, as a museum-quality meteorite could be discovered. This would at least disprove the hieroglyphics claim.

So what are we make of this incredible tale? Just that—it was a tale, and a tall one at that. If Lumley witnessed anything, it was undoubtedly an enormous meteorite. But rather than cast aspersions upon Lumley’s good name, it was likely a practical joker in the newspaper business that was responsible.

Newspapers of the latter 19th century could be notoriously unreliable. Some of the first livestock mutilation cases were reported in Kansas in 1897. One incident, complete with a “cigar-shaped airship” with “strange beings” aboard that abducted a cow then dumped the mutilated carcass, turned out to a hoax propagated by a local Liar’s Club, of whom the newspaper editor was a member.

Practical jokers abounded during the mysterious airship sightings of 1897, sending lighted kites aloft at night. Today there are so many UFO sightings that it is impossible to explain them all. Even so, it does not increase the likelihood that we have been visited by aliens who communicate with hieroglyphics and travel on meteors.

Advertisement. Scroll to continue reading.
In this article:1895, UFO