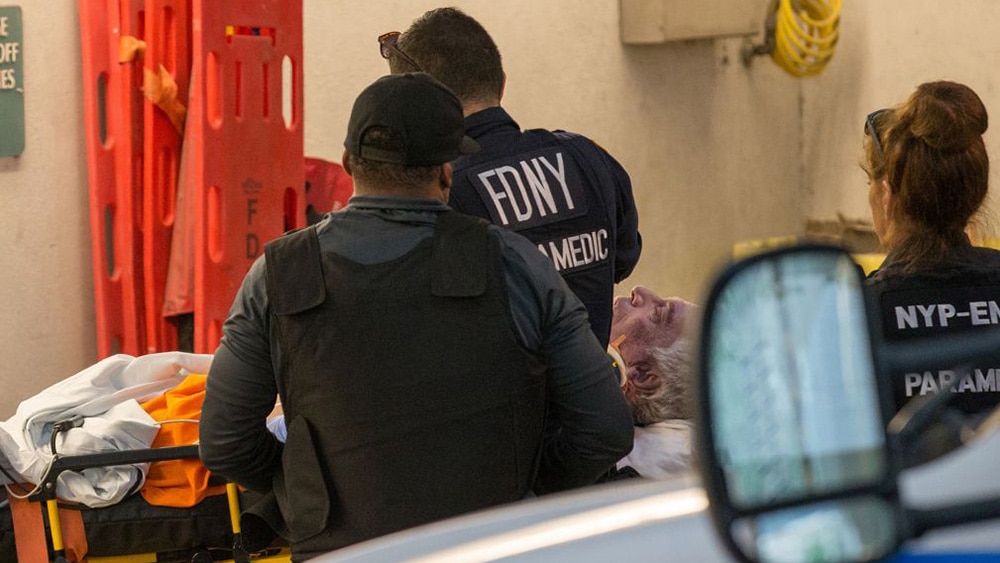 (Mike Adams) The apparent murder of Jeffrey Epstein is sending shock waves around the world, jolting more people awake to the fact that the deep state is so dangerous that even prisoners are not safe from being murdered.

It has now become apparent to every thinking person that America is occupied by an enemy force, a corrupt criminal cartel known as “Democrats” who will kill anyone that gets in their way or threatens their power. Jeffrey Epstein, of course, could have testified to the fact that Bill Clinton is a serial rapist and child abuser whose perverted crimes have been covered up by the complicit left-wing media for decades.

But what if President Trump and William Barr knew Epstein was about to be murdered and took steps to secure him in a safe location so that his testimony could also be secured? Epstein could be the key to bring down the Democrat deep state traitors whose leaders have long been tied to child trafficking, video blackmail and Satanic child molestation rituals. Testimony from Epstein could topple the entire house of cards and expose the sick, Satanic child sacrifice and rape rituals that high-level Democrats have been carrying out for decades.

That’s why this alternate theory is at least worth considering. Although it’s impossible to know whether this is true, there appears to be photographic evidence (see below) that the dead body carted out of Jeffrey Epstein’s jail cell was not the body of Epstein. The body was “swapped,” according to some analysts who are looking very closely at the evidence.

The most likely explanation of all this remains, in my view, the simpler theory that Jeffrey Epstein was murdered by deep state operatives connected to the Clintons. After all, the Clintons have been surrounded by a long list of mysterious deaths, “suicides” and body bags. The number of ex-Clinton body guards, accountants and business associated who have been killed is truly astounding. And the suspicious events at the prison where Epstein was being held continue to mount. For example, why is there no video footage of Epstein killing himself? Why were the guards pulled away? Why was Epstein removed from suicide watch? Why was Epstein’s cellmate removed from his cell just one day earlier? See a summary of these key questions from Michael Snyder.

Even AG William Barr has questions:

NEW: Attorney General Bill Barr says he was “appalled” and “angry” at the failure to “adequately secure” Jeffrey Epstein.

“We are now learning of serious irregularities at this facility that are deeply concerning and demand a thorough investigation” https://t.co/O0OFAg3xyj pic.twitter.com/LiLUJj5cdD

According to Intellihub, which ran some of the best investigatory journalism following the Las Vegas mass shooting, the photograph of a body being removed from Epstein’s jail cell appears to depict the body of a man who isn’t Epstein at all. We haven’t yet confirmed the origins of these photos or the conclusions of the analysis, but it’s a theory worth considering, since the face profiles don’t seem to match. The nose, in particular, doesn’t seem to be the same nose as Jeffrey Epstein: 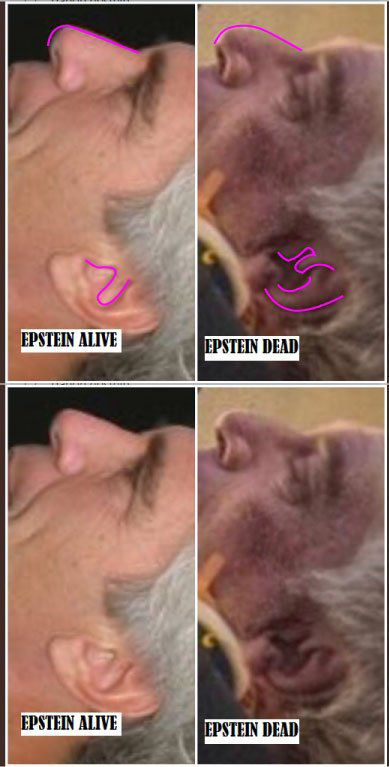 Adding to the mystery, according to Intellihub, a worker at the prison posted a message to 4chan that’s recorded as being posted 10 minutes before the media broke the story of Epstein’s death. According to this post, which has not yet been authenticated (so take it with a grain of salt):

Not saying anything after this pls do not try to dox me but last night after 0415 they took him [Epstein] [to] medical in a wheelchair front cuffed but not 1 triage nurse says they spoke to him. Next thing we know trip vans show up? We do not do releases on weekends unless a judge orders it. Next thing we know, he’s put in a single man cell and hangs himself? Here’s the thing, the trip van did NOT sign in and we did not record the plate number and a guy with a green dress military outfit was in the back of the van according to the tower guy that let him through the gate. You guys I am shaking right now but I think they switched him out. 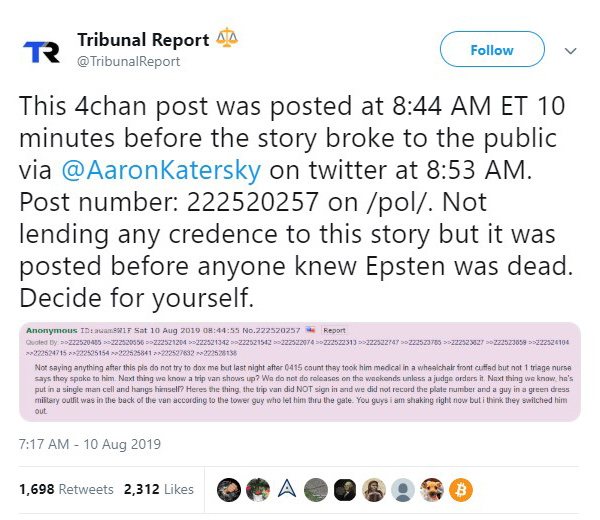 This apparent post seems to indicate that a military person arrived and swapped out Jeffrey Epstein (alive) with a dead body that sort of resembled Jeffrey Epstein. Is it true? You decide.

Be skeptical of all this, of course. There are many potential theories about what happened to Jeffrey Epstein. Because the evidence is being so aggressively covered up, none of us have proof (yet) that any particular narrative is accurate. One thing we know for sure, however, is that the establishment media is lying to us all.

Who would want to remove Jeffrey Epstein and keep him alive?

The obvious question at this point, then, is who would want to remove Jeffrey Epstein and keep him alive? There are really only two possibilities for this:

Possibility #1) William Barr and President Trump ordered him moved to a safe location to secure his testimony and help bring down the deep state.

Possibility #2) The deep state (Clintons) kidnapped him to torture him and kill him. But this explanation doesn’t make much sense because it’s much easier for them to just kill him in his own cell and be done with it. There’s no rational reason to remove him from his cell, only to kill him somewhere else.

Thus, the only remaining explanation — if you believe he was swapped out with another body — is that the DOJ and Trump had him moved to secure his testimony. There’s also a “wildcard” theory that Epstein worked for Mossad, and that Mossad snuck into the jail cell and swapped him out, but that seems beyond far-fetched at this point. Even for conspiracy analysts.

All this brings us to the possibility that Jeffrey Epstein may still be alive, and he may be in U.S. military custody where he is about to offer all kinds of video recorded testimony naming all the high-level Democrats who paid him money to sexually abuse teen girls and boys.

Or, perhaps, this is all just wishful thinking and the truth is that Epstein is dead as a rock. Dead men don’t talk. And they especially don’t talk about the Clintons.

By the way, the left-wing media — run by absolute morons and traitors — now says that if you don’t believe the official explanation of Jeffrey Epstein committing suicide, then you are a “conspiracy theorist.” These are the same media loons who have been pushing a wildly fabricated Russia collusion conspiracy theory for nearly the last three years. Their conspiracies aren’t conspiracies, you see. But your conspiracies are “conspiracy theories.” That’s how the deranged, left-wing media operates, which is exactly why no intelligent person in America trusts anything the media reports anymore.

There will no doubt be a lot more breaking news (and possibly evidence) about Jeffrey Epstein in the days ahead. But if he’s alive and being held by the DOJ or the U.S. military, his testimony could implode the entire Democrat party which has been run by child trafficking rapists and sex abusers for many decades. Jeffrey Epstein could truly be the ultimate weapon to bring down the shadow government dominated by Democrats. That is, unless he’s already room temperature.

Don’t trust the media. Trust your instincts on this one. While you’re at it, the assassination of JFK was also a deep state cover-up run by the corrupt FBI of the 1960s. So you might want to pick up a few books by Jim Marrs and get educated about reality, because the deep state has been running psyops on the American people since at least World War II. Only now has a president arrived that could start to challenge the occupying enemy force (i.e. deep state swamp creatures) who have been mind-controlling America for generations.

Things are about to get interesting…