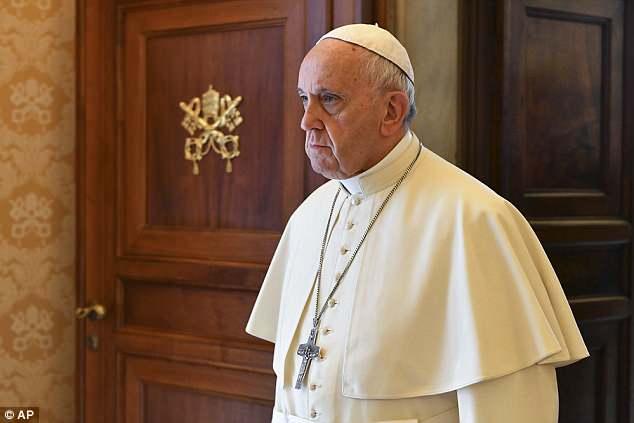 All 34 bishops in Chile have tendered their resignations in the wake of yet another pedophile priest scandal in which high level officials covered up the institutionalized sexual abuse of minors – even threatening officials tasked with investigating sex crimes and the destruction of evidence.

Thirty-one active bishops and three who are retired signed a document with their offers to resign following an emergency meeting this week with Pope Francis. Francis can accept the resignations one by one, reject them outright or delay a decision.

Calls had mounted for the resignations after details emerged of the contents of a 2,300-page Vatican report into the Chilean scandal leaked early Friday.

In one of the most damning documents from the Vatican on the issue, Francis said the entire Chilean church hierarchy was collectively responsible for ‘grave defects’ in handling cases and the resulting loss of credibility that the Catholic Church has suffered. –Daily Mail

“No one can exempt himself and place the problem on the shoulders of the others,” Francis wrote in the document published by Chile’s T13 television and confirmed as accurate Friday by the Vatican.

Responding to the 2,300-page report, Chilean bishops called the contents of the document “absolutely deplorable,” and showed an “unacceptable abuse of power and conscience,” along with sexual abuse.

The bishops asked for forgiveness from the victims, the Pope and all Catholics worldwide.

Pope Francis summoned the entire bishops conference to Rome after he said he made “grave errors in judgement” in the case of Chilean priest Juan Barros – who stands accused of victims of pedophile Rev. Fernando Karadima of witnessing and ignoring their abuse.

But the scandal grew beyond the Barros case after Francis received the report written by two Vatican sex crimes experts sent to Chile to get a handle on the scope of the problem.

Their report hasn’t been made public, but Francis cited its core findings in the footnotes of the document that he handed over to the bishops at the start of their summit this week.

And those findings are damning. –Daily Mail

While some of the pedophile priests and brothers were expelled from their congregations following the discovery of “immoral conduct,” many had their cases “minimized of the absolute gravity of their criminal acts, attributing them to mere weakness or moral lapses,” wrote Francis.

Those same offenders “were then welcomed into other dioceses, in an obviously imprudent way, and given dicoesan or parish jobs that gave them daily contact with minors,” wrote the pope.

The harsh assessment of the quality of seminaries suggests that a possible next step might be a full-on Vatican investigation of Chilean schools of priestly training.

Pope Benedict XVI ordered such an investigation into Irish seminaries after he convened the entire Irish bishops’ conference for a similar dressing-down in 2010 over their dismal handling of abuse cases. –Daily Mail

“The problems inside the church community can’t be solved just by dealing with individual cases and reducing them to the removal of people, though this – and I say so clearly – has to be done,” Francis wrote.

“But it’s not enough, we have to go beyond that. It would be irresponsible on our part to not look deeply into the roots and the structures that allowed these concrete events to occur and perpetuate.”

For all of the “holier-than-thou” admonishments in his letter, Pope Francis is not without blame. The Associated Press reported earlier this year that Francis drew scorn over his appointment of Barros bishop of Osnoro, Chile, in 2015.

The Associated Press reported earlier this year that Francis did so over the objections of other Chilean bishops who knew Barros’ past was problematic and had recommended he and other Karadima-trained bishops resign and take a sabbatical.

The AP subsequently reported that Francis had received a letter in 2015 from one of Karadima’s most vocal accusers, Juan Carlos Cruz, detailing Barros’ misdeeds. That letter undercut Francis’ claim to have never heard from victims about Barros.

Francis further enraged Chileans and drew sharp rebuke from his top abuse adviser when, during a January trip to Chile, he said the accusations against Barros were ‘calumny’ and said he was ‘certain’ he was innocent.

Not so certain now, are we Pope?

In this article:Chilean scandal, Vatican

The Chronovisor: The Vatican and a secret project for time travel

According to numerous reports and stories, among the many supposed secrets that the Vatican maintains is a device called Chronovisor. The Chronovisor would allow its...