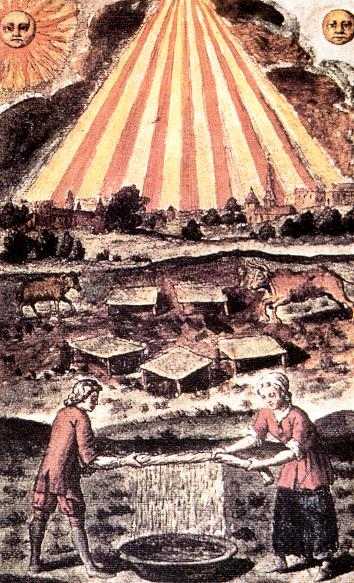 Where we come from, how we got here is a question that has bothered man since his brain was advanced enough to formulate the question. Sumerian texts refer to the Annunaki, or those who came to earth from heaven, apparently in search of gold. According to Credo Mutwa, revered chronicler of southern African myths, early humans lacked speech, but were telepaths, communicating with the animals through mental powers. Humans and animals recognized their spiritual interconnectedness and they lived in harmony with Mother Earth. Until “They” came. “They” emerged from “terrible objects… shaped like balls… bigger than the biggest mountains” that descended noisily on to the earth.
A good many people believe that we are descended from Adam and Eve, who were created by God. Many see Adam and Eve as an allegory for human development; others have concluded that Adam and Eve were real, but not actually created by God as we know him. Rather, the theory goes, they were created by cross-breeding Homo erectus with extraterrestrials from the planet, Nibiru, the “They” of Mutwe’s myth. Could this be the intelligent design that Texas and other US States are so keen to teach in schools, or is it more like designed intelligence?
Researchers like David Sewell Ward,David Icke, John Lash and Jacques Vallees have scoured arcane documents, notably the writings of the Ancient Pagan Gnostics found in the Nag Hammadi Library and the Book of Revelations, and arrived at variations of the theory that the world is controlled by a secret society made up of artificial intelligences who trace their bloodline back to Adam and Eve.
The original Adam and Eve human vessels of alien minds could possibly have been Lunatics, that is, they came from the moon. Many cultures believe that early on the earth was moonless, and that our satellite arrived at a later point in time. This reinforces the theory that the moon is actually an outsized space-ship.
“Adam’s Family” has produced a dynasty of Archons, artificial intelligences who reportedly control the minds of select humans. The Archons exist independently of us, and exert a significant influence on our behaviour. They are,at the same time, aspects of our own mentality and independent alien entities. This power has over millenia allowed them to direct the course of human activity, and in present times to manipulate the global economy, initiate wars, and control political parties. The presence of the Archons, or Adam’s Family, shows that the world is not as it seems, it is rather apparently entrapped in a counterfeit universe that is orhcestrated by the “Demiurge” or “Lord Archon”.