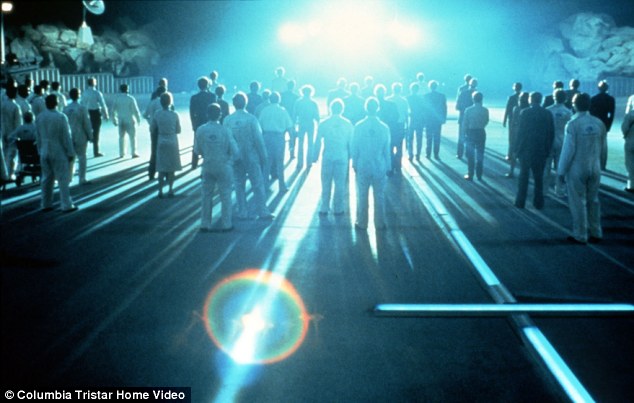 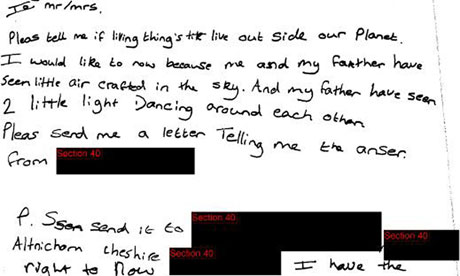 A letter from a schoolchild in Altrincham, released with the MoD’s UFO files. Photograph: National Archives/PA

One sighting in December 2007 described two clusters of amber, orange and white lights in triangular formation moving “like a feather or a cork bobbing on water” over the Vale of Neath in south Wales.

In other cases catalogued by the Ministry of Defence, a caller said he had been living with an alien in Carlisle, and a Cardiff man claimed a UFO took his dog, car and tent while he was camping with friends in 2007. 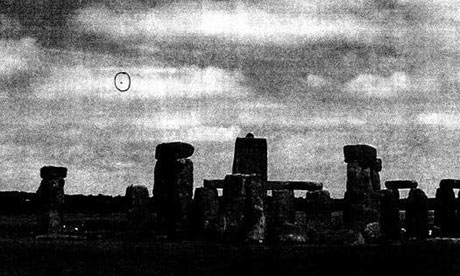 A reported sighting of a ‘UFO’ near Stonehenge, Wiltshire. Photograph: The National Archives/PAAfter more than 50 years faithfully recording reports of UFOs and flying saucers, and patiently answering questions from the public, the MoD eventually decided it was a waste of money, newly released documents show.

“Despite what many people think, and claim, the MoD does not have any expertise or role in respect of UFO/flying saucer matters or the question of the existence or otherwise of extraterrestrial life forms, about which it remains totally open-minded,” defence officials repeatedly told members of the public. Reports were examined and logged, they explained, “solely to establish whether what was seen might have some defence significance”. 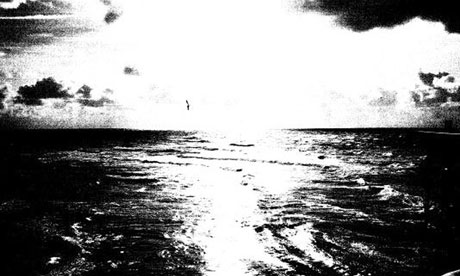 Photograph of a ‘UFO’ taken from Blackpool Pier, Lancashire, in 2008. Photograph: The National Archives/PAOne file released by the National Archives includes a letter to the then prime minister in 2008. “Dear Gordon Brown,” it says, “Do you believe the British people have the right to know if our world has been contacted by alien civilisations?” The letter, like hundreds of others, was passed on to RAF Air Command in High Wycombe. A correspondent in Australia (the names of individuals have been redacted from the files) wrote to the Queen complaining that the British government “continues to refuse to reveal the truth behind their files and reports of unidentified flying objects”.

The writer had tried to contact various UK government bodies – the MoD, the RAF, even MI5 – to persuade them of the “seriousness of this UFO security issue”. A schoolchild from Altrincham, Cheshire, asked whether there was life “outside our planet … I have the right to know”. An RAF official replied: “It’s an interesting question which we remain totally open-minded about.” The official added: “I am enclosing some RAF ‘goodies’ that I thought you might like.”

On 25 June 2009, the Sun newspaper reported, in a front-page exclusive under the headline “Alien army”, that a group of soldiers based at Tern Hill barracks in Shropshire had seen lights in the sky and made a video that they passed on to the tabloid. An unnamed official who had obtained a copy of the video a year earlier said it showed a number of lights in the sky, whose change of colour and square appearance seemed to be due to the photographer zooming in. “The BBC has reported that at the same time as the alleged incident, a local hotel was letting off Chinese lanterns and, apparently, the hotel manager thinks the whole UFO story is ‘highly hilarious’,” the official wrote.

Chinese lanterns became something of a craze, which may help to explain a surge in sightings of alleged UFOs reported to the MoD. Orange lights were filmed on mobile phones and cameras by people saying they were amazed, stunned and frightened when they saw the objects while walking dogs, enjoying family barbecues and relaxing in hot tubs.

According to the files, between 2000 and 2007 the MoD received an average of 150 reports a year. By November 2009, when the MoD decided to close down its UFO hotline, that rate had trebled.

David Clarke, author of The UFO Files, said: “There is evidence that some people were encouraged to report their observations to the MoD and to the press, which could be a direct result of increased public awareness during the period that the first UFO files were being released by the National Archives. I believe this demonstrates that UFOs are very much a social phenomenon.”

The latest files are the last on UFOs to be released by the National Archives. “In over 50 years, no UFO report has revealed any evidence of a potential threat to the United Kingdom,” defence officials observed in 2009. It would be an “inappropriate use of defence resources” to spend any more time or money on the exercise, they added.

‘Not a military matter’

Newly-released files on UFOs not only include reports of sightings, but also alleged contact with aliens. One report, left on the UFO hotline answerphone, was from a man who claimed he had been “living with an alien” for some time.

The report compiled after the June 2008 message said the man described how he had first seen a UFO above his house in Carlisle, but gave no date or time. The form noted that the man, whose name was not revealed: “Said that he definitely has an alien amongst his mists (sic). That things move around the house. Can we please get back to him and explain what is happening.”

Another man left a message in January 2008 claiming a UFO took his dog, car and tent while he was camping with friends near Cardiff in 2007. The report in the files said: “The witness saw spaceships and then said that one of them abducted his dog, car and tent, when he and some friends were out camping.

“They were going quite slow across the sky and one of them abducted the witness’s dog and possessions.”

It added that the man would “like to tell us more about the spaceships he has seen and more about his ordeal. He did not state whether he got back what was taken.”

Officials sent a response to the man, including standard explanations of how the Ministry of Defence did not investigate each sighting, saying: “Unless there is evidence of a potential threat to the UK from an external source, and to date no UFO has revealed such evidence, we do not attempt to identify the precise nature of each sighting reported to us.”

But the message, sent in January 2008, added: “In your answerphone message, you informed us that your dog and possessions were abducted. An official response said: “Abduction, kidnap and theft are criminal offences and therefore would be a matter for the civilian police, not the MoD.”

In another case, a woman who saw “two orange balls” hovering over her back garden in Coventry in July 2008 contacted the MoD to ask if she and her Springer spaniel “could be contaminated” as a result of the experience.

Advertisement. Scroll to continue reading.
In this article:aliens, Files, MoD