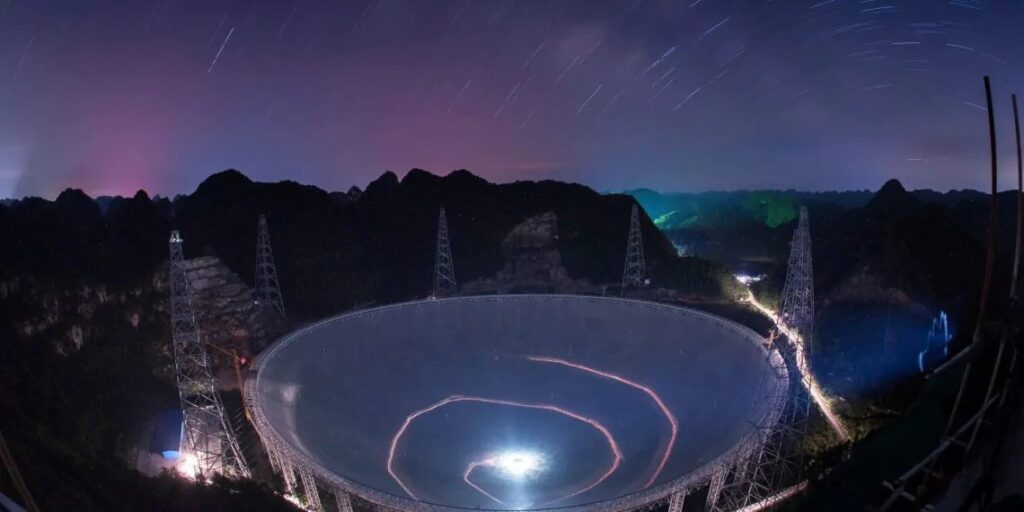 The Chinese state media Science and Technology Daily published a sensational article. It said that the huge Chinese radio telescope Sky Eye, the largest on the planet, detected the signals of an extraterrestrial civilization. A few hours later, the material was removed without explanation, all traces of the text were carefully “erased”.

Those who managed to read it learned that a huge radio mirror heard narrow-band signals containing meaningful information. Narrowband means artificial. Natural sources, such as lightning, sway at almost all wavelengths but we listen to our favorite radio station at a particular wavelength. Moreover, the detected mysterious signal was of low frequency – its role in interstellar communication has become clear to humans quite recently. The great Nikola Tesla from the very beginning received signals at a low frequency (and allegedly even detected something).

These signals were caught back in 2019 but they were not made publicly available. They were studied and then they were heard again in 2022, that is, just now.

The problem is that “the Internet remembers everything,” and although the Chinese somehow destroyed all copies of the article, the news spread through the world media, and serious journalists from major publications began to question Beijing. In turn, the Chinese apointed a researcher named Zhang Tongjie to be torn to pieces by the public. Zhang said that it was too early to rejoice, and perhaps we are dealing with man made interference.

“A suspicious signal can also be radio interference, which subsequently needs to be confirmed or refuted,” said Professor Zhang Tuangjie.

Of course, no one believed the official statement. To get into the Chinese state media, you have to go through a million approvals. So, Western journalists concluded that the Chinese are going to conduct separate negotiations with the newcomers. This is understandable given China’s strained relationship with the Western world. Here is another proof, albeit indirect: if the signals were found a long time ago, now it is clear why the Chinese put a low-frequency receiver on their lunar rover. When the public asked what it was trying to detect, it turned out that all the data was, as it were, not classified, but not available either.

In the search for alien civilizations, man has used various methods over the years. Among them is the search for electromagnetic wave signals from space that do not match anything already known. Radio signals are actually the most suitable means for interstellar communication: they penetrate the Earth’s atmosphere in all weather conditions. To do this, radio telescopes have become the main pillar in the search for extraterrestrial civilizations. In the 1960s, US astronomer Frank Drake began the first modern experiment to search for intelligent extraterrestrial life using the now defunct Arecibo radio telescope, but was unsuccessful.

It is possible that the Arecibo radio telescope has not previously been able to detect reliable signals due to its smaller capabilities, but other unknown reasons cannot be ruled out. Li Geng, chief scientist at FAST, said in an interview that he expects FAST to make further advances in research areas such as studying signals from suspected extraterrestrial civilizations.

In general, the aliens will be surprised that not all humans eat noodles with chopsticks. It will be a shock to them.

In this article:China, extraterrestrial signals