Here are four haunting images:  the first a strange face in an ultrasound images, a “dark man” photographed in a graveyard, a mystery figure accidentally photographed at a Texas lake, and finally a female “vampire”

Alien Face Appears In Pregnant Mothers Womb? is the title of the latest video from Stephen Hannard of Alien Disclosure Group UK.

Mother-to-be Anne Clewlow was stunned when she received an ultrasound scan of her baby and saw this ghostly face alongside it staring back at her.

Grainy markings next to the picture of her womb appear to form a giant human head with two eyes, a nose, a mouth, ears and neck.

The alien-like face even appears to have a mop of dark-coloured hair.

Despite the spooky appearance of the face, Ms Clewlow, 34, is treating it as a guardian angel who is watching over her unborn child. 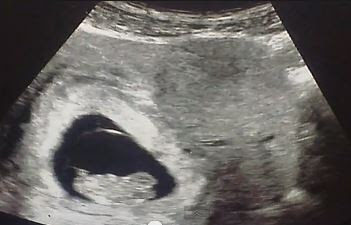 Ms Clewlow, from Stoke-on-Trent, Staffordshire, was nine weeks pregnant when she had the routine hospital scan for her second child.

An operations manager, she said: ‘When I had the ultrasound and looked at the screen, I didn’t see anything unusual but when it was printed it was obvious. 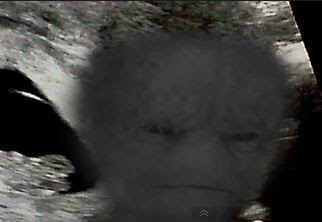 At first I brushed it off and thought it was just one of those things but after I looked at it a few times I couldn’t deny there was nothing there because it is just so vivid.

I don’t think there is anybody I have shown it to who hasn’t pointed it out. Some people have been a bit freak out by it.

It looks like a bald man. I don’t know anyone in my family who looks like that so I just think it is something of a guardian angel. 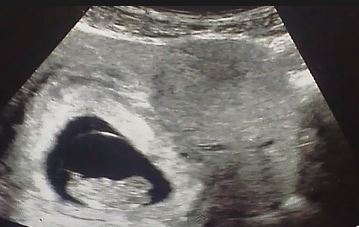 Although I’m not religious I do think it could be something watching over my baby.’

Ms Clewlow, who has a 10-year son, Ryan, is due to give birth to her second child in August. http://www.dailymail.co.uk/news/article-2290136/Shocked-mother-sees-ghostly-face-womb-baby-scan-picture-says-childs-guardian-angel.html

Dark man in the Peck Cemetery, taken in Decatur Ill., a well-known haunted cemetery in the area. 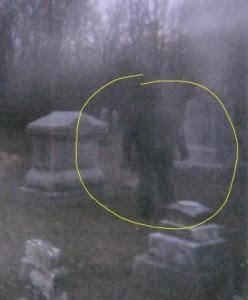 There were 2 people at the location at this time, but neither claim to be in this shot.

The remains of a female ‘vampire’ from 16th-century Venice, buried with a brick in her mouth to prevent her feasting on plague victims Reports of vampires in graves actually describe a corpse during decomposition. The rigor mortis would have disappeared. A phenomenon called epidermolysis would be visible, in which the epidermis loosens from the underlying dermis and the nails fall off, exposing the nail beds and giving the impression of new growth. At the same time, the corpse would be going through the putrefaction stage in which the abdomen gets bloated from the build-up of gases, according to the magazine Archaeology.

Samir S. Patel writes, “The decay of the gastrointestinal tract contents and lining create a dark fluid called “purge fluid” that might flow freely from the nose and mouth and could easily be confused with the blood sucked by the vampire. And if a corpse was wrapped in a shroud, putrid gases and purge fluid flowing from the mouth would moisten the cloth so that it would sink into the mouth (which would open as the muscles relaxed after rigor mortis), where the fluids would break it down. So the legend that corpse could eat through its shroud is a real observation that was interpreted without the proper medical knowledge.” 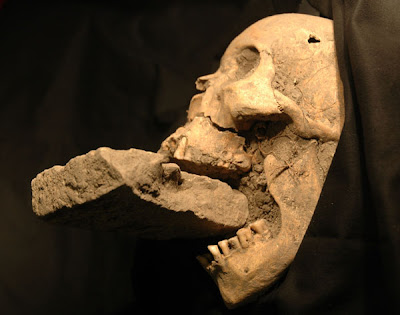 Photo: Courtesy Matteo Borrini
The nachtzehrer is a dead body kept in a kind of liminal life by supernatural forces or Satan,” according to Archaeology.  A “scientific” overview of them was offered by Protestant theologian Philippus Rohr at the University of Lipsia in 1679, under the title Dissertatio historico-philosophica de masticatione mortuorum. The text describes some distinctive habits of this revenant: the nachtzehrer usually eats the cloth or funerary shroud in which it is wrapped, and its chewing causes noises similar to a pig while it is eating. As it chews through the shroud, it is just in a larval stage. When it becomes stronger, it can even leave its grave to become a real, “traditional” vampire  See more at .http://archive.archaeology.org/online/features/halloween/plague.html
Mouth of Truth
The “Mouth of Truth” is an ancient Roman sculpture, thought to be an image of a Pagan God. The myth behind it is, that if you place your hand in it’s mouth and tell a lie, it will bite it off!
Evil Tooth Worm
The “evil tooth worm” is an urban legend that dates back as far as 5000 BC – where it was referenced in a Sumerian text. Without adequate understanding of why teeth decayed, many believed that the tooth worm bore a hole through your tooth and hid beneath the surface. A toothache was  the result of a restless worm wiggling around.
In this article:Alien, dark man, ultrasound, vampire, womb