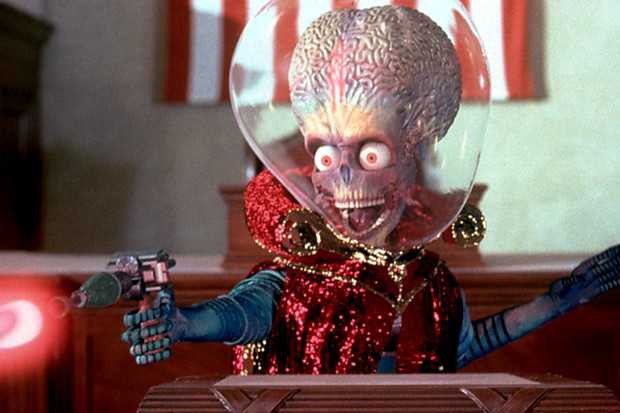 For as long as I’ve been reading about alien conspiracies, it’s been an accepted article of faith among believers that the government was the enemy of the people and was conspiring with an alien race, or simply with other governments in our world, to keep evidence of a sentient extraterrestrial presence hidden.
In 2012, authors Richard Dolan and Bryce Zabel became instant iconoclasts within the believer community when they published a book, After Disclosure, that laid out meticulously what the government should do to prepare the public for the “disclosure” of the conspiracy. The book leans in to the notion itself. The government conspirators, say these two, think that the conspiracy is untenable and that a full and open discussion of the fact of alien sentience is the best way to unite the world. Somehow.

This big secret will be revealed in 2015, if the chatter on shows like Coast-to-Coast AM is any indication. Why? Well, the “Grays” — the name given to the aliens who either conspire with the government to keep their presence hidden or are on the verge of attacking the Earth — have somehow given an ultimatum to their human co-conspirators. Maybe it’s time to move humanity into the next phase of their existence. Maybe humans are battering the planet so badly that the Grays, who need the milk of the Earth to survive, are in peril. If humans fail to disclose the Grays’ existence, then the Grays will make themselves known by, perhaps, a global television event that shows off their gravity-defying hardware.

One-third to half of Americans give real credence to the possibility that aliens exist and are living among us. That’s 80 million to 100 million adults. They don’t just think that alien DNA might have helped spark life on Earth, or that life exists elsewhere in the universe. They believe in the conspiracy. We treat them as ninnies with tin-foil hats and bumper stickers. But they are all of us!

I’m a skeptic of the Penn Jillette variety. I would not believe that a sentient alien life-form had visited the Earth even if I were to meet an alien face-to-face. I trust in my own eyes, in my own fallible, pattern-seeking brain, quite a bit less than I do the laws of science and the record of empiricism. However, humans believe in weird things for all sorts of reasons. Based on data points alone, it should be much easier to believe in the existence of ETs than it is to believe in creationism, and yet…

My interest in the UFO community is motivated by entertainment, yes, but also by professional curiosity.

The government is broadly unpopular. Americans see it lurch along, indifferent to their concerns, unable to figure out how to really enhance their lives, redistributing resources according to popular whims, too subservient to the interests that bankroll the politicians who run it. It is incapable of orchestrating major policy changes without significant hiccups. Whistle-blowers with incontrovertible evidence of government misdeed talk to The Washington Post, to Congress, or to Laura Poitras.

The shift from paranoia to optimism within the UFO community might represent a new strategy to gain public acceptance. UFO sightings go viral and are debunked just as quickly; perhaps, the believers believe, it’s time to use the same tactics that successful political campaigns use to get the real media to pay attention, and to begin to seriously pressure political leaders to come clean. (Whether the media is part of the conspiracy itself is…well, I can’t tell you.) And look: The disclosure of alien life would truly change the world overnight. Big conflicts would seem irrelevant. It would be much easier to tackle global problems if humans were forced to think of themselves as members of a single planet.

The scientists who search for extraterrestrial intelligence do not believe that aliens have visited Earth. They think that we might pick up unambiguous evidence of the existence of another civilization someday. (See the movie Contact, which was based on a book by Carl Sagan.)

Two vastly different belief architectures both agree on this: “Disclosure” or discovery would change everything. I remain skeptical. But it’s fun to think about.