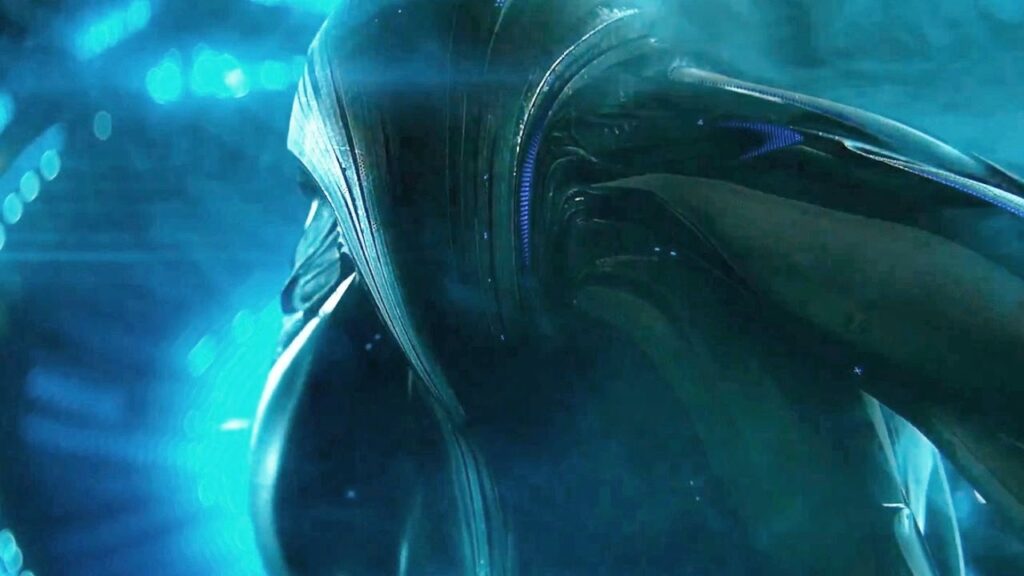 Mysteries on land, of course, arouse great interest, but much more mysterious are the enigmas lurking in the depths of the waters. After all, it is not so easy to get there, you need special equipment and skills in underwater archaeology.

For many millennia, the Caspian has been of great interest to scientists, because there are still many questions that even researchers and experts find it difficult to answer.

Caspian Sea in the “Book of the Dead”

It is believed that in the Tertiary period (several million years ago) one large sea reservoir lay on the site of the present Black, Azov, Caspian and, possibly, the Aral seas.

The Black Sea communicated with the Caspian Sea along the Manych depression, north of the Caucasus. Subsequently, the pool was divided into parts. When the land was uplifted, a wide bridge was formed between the Black and Caspian Seas. However, traces of the former connection have survived: in the Caspian, Black and Aral Seas there are organisms of a common origin and even the same species.

Also, in the Caspian and the Aral there are organisms that live only in the ocean: for example, the heart-shaped bivalve mollusk and sea grass. Biologists have calculated that 1/3 of the Caspian organisms are characteristic of both the Black and Azov seas. The Aral Sea, according to biologists, is the easternmost region of penetration of marine organisms from the west. Seals, white fish and sea cockroaches living in the northern seas are still preserved in the Caspian Sea.

How the Aral Sea was connected with the Caspian and when it separated from it is difficult to say now, but the fact that it was connected to the more western seas is beyond doubt. Thus, all these bodies of water are regarded as the remains of an ancient, very large sea.

But, probably, one of the interesting points related to the history of the Caspian is that it is mentioned in the Egyptian “Book of the Dead”. In ancient Egypt, the so-called “Book of the Dead ” was placed in the grave of the deceased  – a small text in which it was noted where, according to the Egyptians, the soul of a person leaves after death.

Are there icebergs in the Caspian and what makes the water so cold in summer?

There are no icebergs in the Caspian, but despite this, in the winter of 1954 a catastrophe happened there due to a sharp cold snap. Ice blocks broke off and fell on ships and overpasses. One of the fishing boats capsized and the entire crew was drowned.

Another anomalous feature of the Caspian Sea is that in June the water temperature begins to rise, but then it drops sharply, even fog appears around. At this time, the sea begins to bloom, filling with algae. What is the reason for this phenomenon?

This phenomenon is often observed on the eastern coast of the Middle Caspian, when a steady east wind blows, all surface water goes far from the sea border, and instead becomes colder.

During this process, in summer, especially in August and July, temperatures on the eastern shores of the Caspian Sea are so low that even swimming is impossible. Sometimes, depending on the synoptic conditions (wind regime), these processes also occur in the western part of the sea.

The next phenomenon in the Caspian is that the water level changes regularly – it rises, then falls. The last rise took place in 1978 – 1995, when the water rose by more than two meters, and in 1996 – 2021 it fell by 1.5 meters. This happens because the water level depends on climatic changes and the indicators of the flow of the largest river feeding the Caspian – the Volga. In other words, the level is determined by the ratio of the water balance – incoming and outgoing parts of the sea.

There are no icebergs in the Caspian, but if a very cold winter occurs, then ice forms in the northern part, which moves towards the south. In 1924, ice also formed in the southern part of the sea. This often happened in the 50s, when there were particularly cold winters. Also, in 2011, thick ice formed at the mouth of the Atachay River.

What do the waters of the Caspian Sea hide?

It is impossible to imagine how many shipwrecks occurred in the Caspian and how many treasures went to the bottom of the sea. Old-timers claim that a cossack leader buried his treasures on the islands. The likelihood that many archaeological monuments have appeared under the sea is due to the fact that its level is subject to fluctuations, both for a relatively short duration of a few tens of years (intrasecular), and for a thousand years or more with large amplitudes, causing large transgressions and regressions of the sea. The monuments buried by the Caspian Sea are overgrown with legends and legends.

There is no doubt that the seabed around the Sangi-Muğan island still conceals many secrets, hiding monuments of history and culture under the water. The iron knives found there were a commodity cargo, as evidenced by their quantity and packaging. These are small knives about 18 cm in size with a single-edged blade.

Underwater archaeological expeditions organized in the 80s, confirm the fact that, in addition to the Silk Road route, there was a sea trade route along the western coast of the Caspian Sea.

As a result of these expeditions, a huge number of medieval and possibly earlier anchors were found under water. The path ran through the mouth of the Volga, and it connected with the Don, which was visited by ships from the Black Sea, and all this rushed to Persia.

At that time, the Sangi-Muğan island was a natural shelter from the Caspian storms, it resembled a horseshoe in shape and allowed ships to hide from a strong storm. They say that the name of the island is associated with that same cossack leader Stenka Razin, who in 1669 defeated the Persian fleet led by Mamed Khan.

The Caspian is indeed fraught with many mysteries

The Caspian has a unique feature called the precession of the sea. Every few hundred years the sea grows shallow. In the Middle Ages, it became so shallow that it was divided into two parts. On all ancient medieval maps, the Caspian Sea has two names and everyone thinks that this one sea is called by two names – the Khazar Sea and the Hyrcanian Sea. But in reality they were two different seas.

Genghis Khan with his army literally walked along the ridge in the middle of the sea. This ridge still exists, and if the Caspian becomes shallow, it will be exposed.

In addition, the Caspian Sea is fraught with mystical mysteries, and one of them is square 28. When a person is sailing on a boat, the water abruptly begins to leave – a funnel is formed, and the boat abruptly sits on the bottom.

There are teachings that there is civilization underground. According to Egyptian mythology, the Caspian Sea is located at the very edge of the Ocean of Light. That is, beyond the Caspian there is the world of the dead, from where the sun is born. From one of its sides, the Sun God emerges from the underground sea, into which the water of the Caspian flows, and on his boat sails towards the east.

The proof of this is the images of these boats of the sun on the rocks of the surrounding National park. There is an underground kingdom under the Caspian Sea where the ‘ancients’ live and often is very clearly visible how luminous flying objects fly out from the Caspian Sea, namely from square 28.

What creatures live in the Caspian?

Every year dozens of people disappear into the Caspian and cannot find their traces. And after a while, the waves carry ashore, sometimes disfigured beyond recognition, bodies or parts of them.

There are no sharks in the Caspian Sea so what happens to these people? We do not know the exact answer, but some associate this with the legend that amphibious humanoid creatures allegedly live in the Caspian Sea, which are called “Runan-Shah” in Iran.

Ufologists argue that between the Caspian and the Black Sea people once lived who built underground cities that were found in the surround area.

Some relict creatures can live in the Caspian Sea, evidence of this is a strange skeleton found on the banks of the Araz River, 175 cm long, weighing about 6 kg.

Caspian sea is the base for space aliens. One of the latest UFO sightings over the Caspian Sea was recorded on video on January 28, 2011. In 1997, a UFO was seen from a tugboat, which fell into the sea, after which there was an explosion and a column of water rose. Ten years before this incident, in 1987 and near the Shelf-6 drilling rig, several eyewitnesses observed a UFO landing on the water – a classic “flying saucer” about 30 meters in diameter and with red lights around its perimeter.

After landing, the UFO exploded. Water samples were taken and an oily spot with a diameter of about two and a half kilometers was found. However, at the same time, a regional jet crashed. The plane is believed to have collided with a UFO. It is characteristic that neither in 1997, nor in 1987, the wreckage of the UFO, as well as the wreckage of the jet, was ever found.

Perhaps someday the future generation will unravel the remaining secrets of this sea. In the meantime, it is receding, and who knows what surprises await scientists.

In this article:Caspian sea, humanoid creature 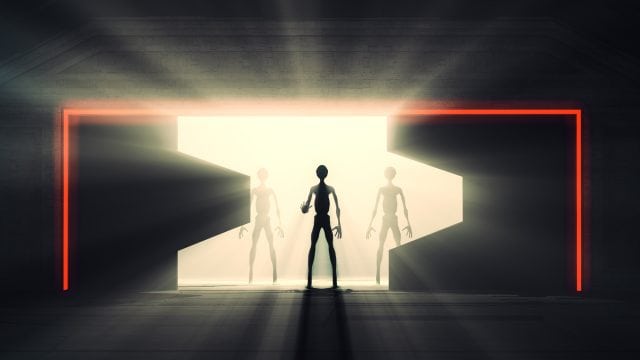 © mysteriousuniverse.org A strange, unidentified humanoid creature has been spotted near Mount Vernon just outside of the nation’s capital. Has one of Washington D.C.’s...