Valiant Thor, labeled a Space Emissary by the Department of Defense, lands on Earth with a promise of bright future for the world, and lives at the Pentagon for 3 years interacting with the President and Vice President and military brass. Our film explores what happened during Thor’s Pentagon tenure.

“The landing of Valiant Thor was perhaps the first documented landing of a human-type alien by military officials. He met with President Eisenhower and Vice President Richard Nixon for an hour, then the alien was put on VIP status and shuttled back to the Pentagon.”  –Harley Byrd, Project Blue Book, Division of United States Air Force

It is alleged that these three people were extraterrestrials and had came to Earth in the 1950′s with an important message. This is a photo (one of several) that was taken at a meeting with the United States Government.Valient Thorr’s, or Valthor’s, message seemed to be one of peace. He said that we are being watched by multiple alien species. Valiant Thor (right) in High Bridge New Jersey in 1959 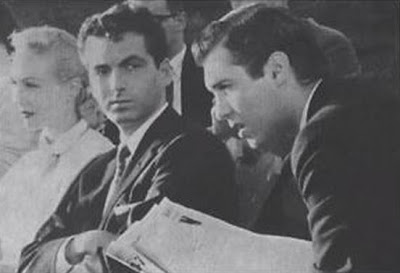 Stranger at the Pentagon – Short Film  recreating the events of Space Emissary Valiant Thor who lived at the Pentagon under VIP status for 3 years under Eisenhower Administration.

Author Dr. Frank E. Stranges met Commander Valiant Thor, a Created Being and spiritual representative of the universe on Christmas Eve in 1959. He had a lifelong friendship with Thor until his death in November 2008. 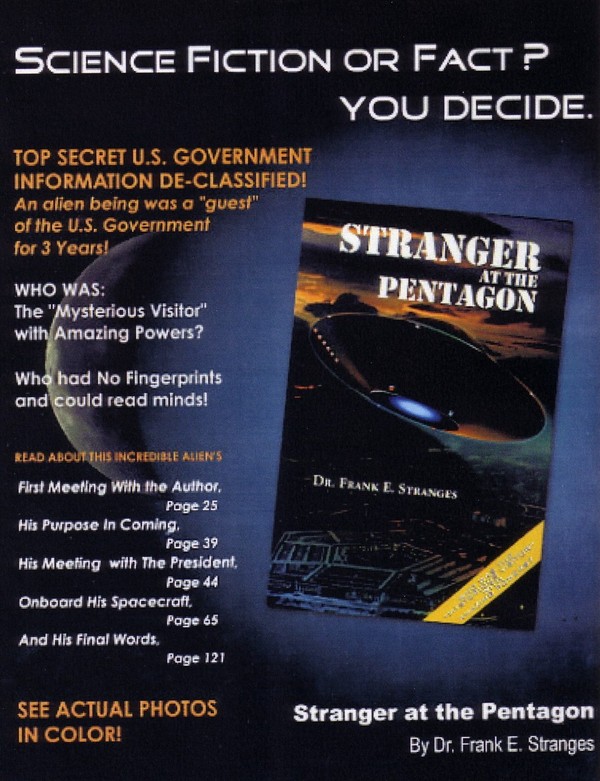 Extracted from:  “Stranger at the Pentagon”

“When I asked him where he was from, he replied, ‘I am from the Planet that is called Venus.’ I asked him how many visitors from Venus were presently on Earth and he said, ‘There are presently seventy seven of us walking among you in the United States. We are constantly coming and going.’”

March 16, 1957, in Alexandria, Virginia, one of the finest leaders of the planet Venus, operating under the direction of the Central Control and who had been chosen to make the contact as well as direct the project, landed his craft and was met by two police officers, weapons drawn.

A thought transference quickly convinced them that he meant no harm and he was ushered into the back seat of their patrol car. After crossing over into Washington, D.C., they were met by the Secretary of Defense along with six of his staff members. Soon police from every conceivable district and agency had joined in, all trying to claim their right to escort him to President Dwight D. Eisenhower.

Through his own version of the power of positive thinking, he was able to dismiss them all and soon passed through the security posts followed by an Air Force Captain.

Meanwhile, his presence in the area had thrown everyone into a dilemma. The introduction he held from the High Council worried them because, though not written in any Earthly language, their minds were given power to properly translate the inscribed message.

“My god, why couldn’t this have happened on my day off?”

Suddenly the door opened and six armed guards led Val to what appeared to be an elevator. It went rapidly to the bottom-most level. Maximum security was in place. After transferring to an underground train, they sped toward the White House. Six officials, six armed guards and three secret service men escorted him into the office of President Eisenhower.

Standing in front of his desk, the President said,

“Of course, you know we have suspended all rules of protocol. I have a good feeling toward you. Please, sir, what is your name?” “And where do you come from?”

“I come from the planet your Bible calls the morning and the evening star.”

“Can you prove this,” he asked.

“What do you constitute as proof?”

He quickly retorted, “I don’t know.”

“Will you come with me to my ship?”

He answered with a quizzical look and said,

“My friend, I cannot come and go as I please. There are others to be considered. There are committees to be consulted and security measures to be adhered to. Please spend some time with us here …Let’s get better acquainted …learn more about one another …and perhaps soon, real soon, well …we shall see.”

In 1959 Dr. Frank Stranges  had his first physical encounter with Commander Valiant Thor, a Venusian. His book, Stranger at the Pentagon explains the details of his encounters.

According to Stranges:  Commander Valiant Thor was created (as were the Angels) eons before time was configured. He is indeed a very wise man and has thereby been duly endowed with abilities far beyond that of human imagination. He stands about six feet tall and to this day he weighs about one hundred and eighty-five pounds. His hair is brown and wavy. His eyes are also brown and his overall complexion is rather tanned.

The Commander has a unique sense of humor, which certainly distinguishes him from a host of many other “space people.” He is a very unusual man in many respects. Yet while standing in his presence, one is suddenly made to feel quite comfortable. He is a man of many spiritual gifts which have distinguished him to the point where he was duly appointed as one of the Council of Twelve on his home planet Venus.
Whenever he is dispatched to other parts of the Universe, he is always greeted as a man of God. A man who is looked upon with tremendous love and respect. He is often called upon to assist those of other worlds in making certain decisions which directly affect the entire population. His conduct is always above reproach in every manner whatsoever.
The truth of this matter lies in the fact that he is in demand because of his unique ability to spiritually discern and thereby solve many problems. Such a man whose reputation precedes him is loved and admired for his dedication and love of Almighty God, under whose direct orders he operates.
It may interest you to discover that he had indeed communicated with a number of members of the Inner Circle, the Interspace link subscribers, members of the Royal Order of Melchizedek and others during the past years. A number of you have written to him in the past with certain problems and he has been kind enough to reply to your requests.
However, over a period of time, certain people have also sent in some rather foolish requests. Such as, what color toilet tissues should I use, how can I find a space woman (or man) to marry, please grant me a good tip on the stock market, and I will give Dr. Stranges 10%, and other such ridiculous questions and meaningless propositions. Of course, he did not dignify such questions with a reply.
Commander Valiant Thor has the ability to appear and disappear at will. He also possesses the ability to disassemble the molecular structure of his body and reassemble himself at a distant point. This is the manner in which he vanished from the Pentagon, passing through the door of his apartment in which he was confined and carefully guarded by two Air Force Military Policeman.
He then joined his brother, Vice Commander Donn and Jill who then appeared on the front lawn of the home of Howard Menger, in High Bridge, New Jersey. They then attended a lawn UFO lecture, where every one there saw them. However, few of them knew or even suspected that these people were from another world. My friend, the late August C. Roberts took many pictures of them, which were later published in my book Stranger at the Pentagon.
One of the witnesses at that particular lecture was another friend of mine, Mr. James Moseley of Key West, Florida. Oddly enough, over the years, quite a number of people have recognized him when he has attended lectures, both in the United States and abroad.
Inasmuch as he has been gifted with many other abilities, he has successfully utilized these to assist mankind on this planet Earth. He is able to speak and communicate in every language and dialect (including sign language) known to mankind today. In this manner, he has successfully won the confidence of people, worldwide.
Among these, the children whom he has literally picked up off of the garbage dumps of major cities of the world. These are the children who have no parents, no place to sleep or proper food for their frail bodies. They are sickly, weak, undernourished and unwanted by the multitudes. He has approached these poor children, both boys and girls, spoke to them in their own language or dialect, won their competence and in many cases literally carried them in his loving arms to the waiting Victor Class Space Craft.
Once on board, the children are warmly and lovingly caressed by other members of the crew who care for them before they are brought into the homes and waiting arms of the newly adoptive parents. He also possesses the ability of looking directly into your heart and mind in order to fully ascertain and appreciate your inner needs. This is a trait also practiced with great love by our Master, Jesus Christ, with whom the Commander enjoys constant fellowship and communion.

See more extracts from Stranger at the Pentagon at Biblioapleyades