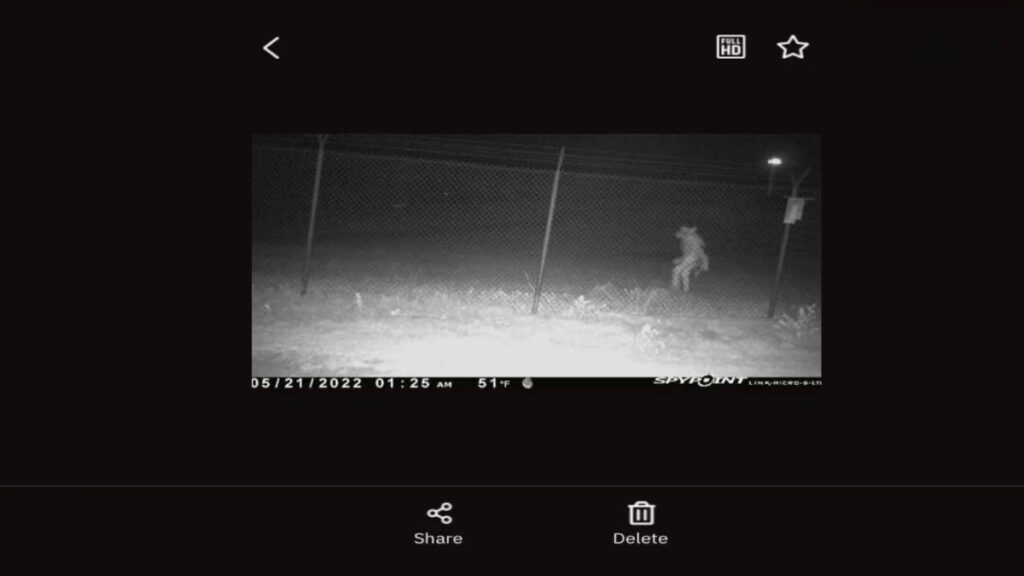 A mysterious creature has been spotted at a US zoo in Amarillo, Texas, as a photo released on the internet shows a coyote-like animal standing on two legs. In this regard, the administration is asking the public for help in identifying the strange creature that looks like a werewolf

According to thesun.co.uk, the photo was posted on Facebook from the official page of the city of Amarillo and according to the zoo officials, the unknown creature was recorded by a municipal security camera on May 21, about an hour past midnight.

“Was he a man in a weird hat who likes to walk at night?” A large coyote standing on its hind legs? A chupacabra? “It is a mystery that must be solved for the city of Amarillo”, an official wrote on Amarillo’s page in a Facebook post.

Michael Kashuba, Amarillo City Amusement Parks Director, said: “This creature was outside the Amarillo Zoo. “There were no signs of an attempt to enter the zoo”, while so far no resident of the city has identified the mysterious creature.

Now, the zoo officials are asking the people on social media to help identify the specific creature, in order to clarify its identity, with the response being great.

From the first moment the above news was released on Reddit, many social media users expressed intense interest and wanted to help in their own way. So it was not long before humorous reports appeared that this particular creature could be SEGA’s Sonic character or a werewolf, while others mentioned that he might be a drunk leaving a party.

However, there were also those who thought they had spotted the chupacabra, the legendary “monster” from Latin America, with references that extend to the southern United States.

The chupacabra is considered a cryptid, ie an animal whose existence has not been proven but is believed to belong to traditional folklore and the modern trend for fiction, while according to legend, it attacks herds, mainly goats, and sucks their blood.

Texas is known for its tales of the werewolf, Bigfoot, and its own dog-like version of the Chupacabra, as well as bears and other creatures that can stand up on two legs and be mistaken for a cryptid or monster. Reports of cryptids are of great interest there, while large sums of money are usually spent on relevant research, as well as highlighting the area, which is “haunted” by the “monster”.

After all, this is Amarillo, where the famous werewolf or Dogman encounter took place in 1970:

“Suddenly, a creature literally threw two huge dogs out of the attic window like rag dolls. They were both skinned alive!”

“The two officers who were inside went to the attic to see what it was. Everyone outside heard a lot of shots and then saw one of the officers thrown out of the window. He was dead before he hit the ground. When everyone looked out of the window again, they saw a creature unlike any known animal. It looked like a big, hairless bear with blue skin, big red eyes, and sharp claws.”

Nothing remained of the creature after it was “destroyed by a high-ranking military officer” and the house and everything in it were blown to pieces by gunshots and two grenades before officers set fire to the wreckage. It was said that all that was left were “footprints leading away from home.” Are these local incidents like this reason enough to let the public know that a strange werewolf creature has been sighted outside the zoo, to publish its ‘identikit’ and ask for help identifying it?

Of course, according to some internet users, the news about the mysterious creature outside the Amarillo Zoo can be a publicity stunt to attract more tourists.

In this article:Chupacabras, Texas, werewolves