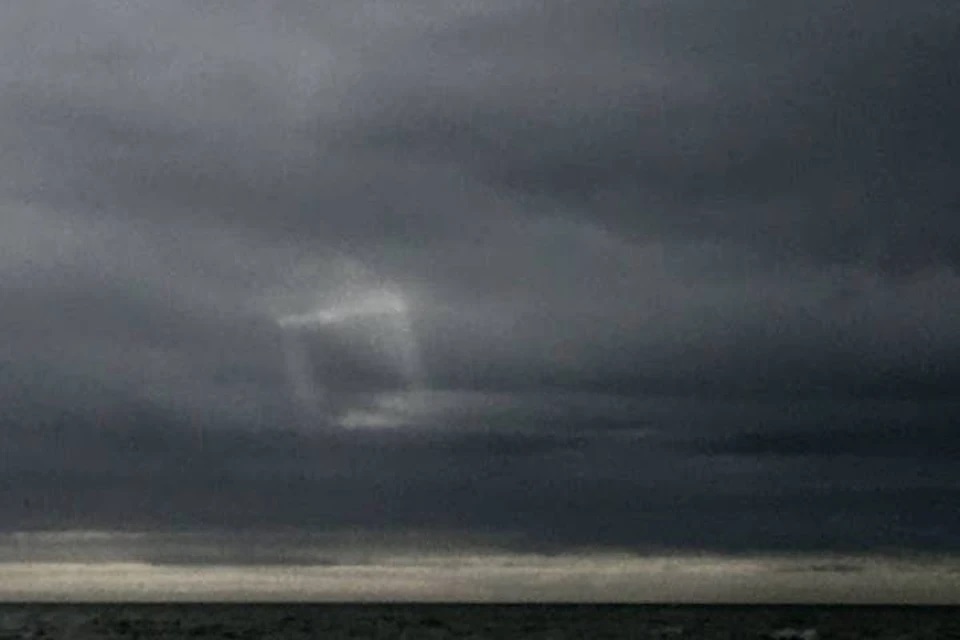 According to the message number 118502, added to the dossier of the international ufological network MUFON (Mutual UFO Network), on October 8, 2021, a window was opened in the sky over the US state of Virginia in the Virginia Beach area.

According to eyewitnesses, a luminous translucent object peeped out of the clouds as they called the window a portal and estimated its size at about one and a half to one and a half kilometers.

Scott C. Waring, a famous ufologist and virtual archaeologist who paid attention to the “report”, believes that the outline of a UFO was highlighted in the clouds, a certain material object of alien origin appeared from behind the clouds.

Experts who tried to understand the phenomenon did not understand it, citing lack of information. Although from common sense it can be assumed that the sunlight refracted bizarrely, while penetrating through the holes in the clouds.

A few days later – on October 12, 2021 – Scott noticed something strange. While watching the footage of the live broadcast (NASA Live ISS cam) from the International Space Station (ISS), he saw squares over the ocean – one large and two small, which adjoined it. The objects differed In color and consistency, from the clouds that surrounded them. The ufologist, of course, decided that these squares were also UFOs, possibly emerging from the ocean.

Cube in the clouds

In the summer of 2015, a dark cube materialized in the sky over the city of El Paso, Texas. The most impressionable ufologists decided that an alien ship of such a cubic shape had teleported to us. Some were frightened, others were shocked, thinking that aliens had begun an invasion but nothing so aggressive happened.

City in the sky

In October 2015, several thousand Chinese (Foshan, Guangdong province of China) witnessed an equally amazing phenomenon – a city appeared in the clouds. Experts have suggested that this is a mirage, as a result of the fact that special conditions arose in the atmosphere – cold and warm layers lay one above the other – an image of a certain city appeared, located somewhere very far away.

A similar phenomenon is called Fata Morgana. However, it remains a mystery where the image was projected from.

Some observers saw the outlines of a medieval city in the mirage which “draw” the phenomenon in a mystical way allowing even sceptics to assert that there was a so-called time mirage – a picture from another time.

There are many stories on the appearance of such phenomena, but there are no tangible explanations.

Advertisement. Scroll to continue reading.
In this article:MUFON, square UFO

[ad_1] Over the last month, an elongated unidentified object, which reminded some of a cigarette or a snake, has been spotted in several US...

[ad_1] © Screenshot/UFOZone Mysterious lights caught on a time-lapse video recorded from a pier in Myrtle Beach, South Carolina, in early August have triggered...