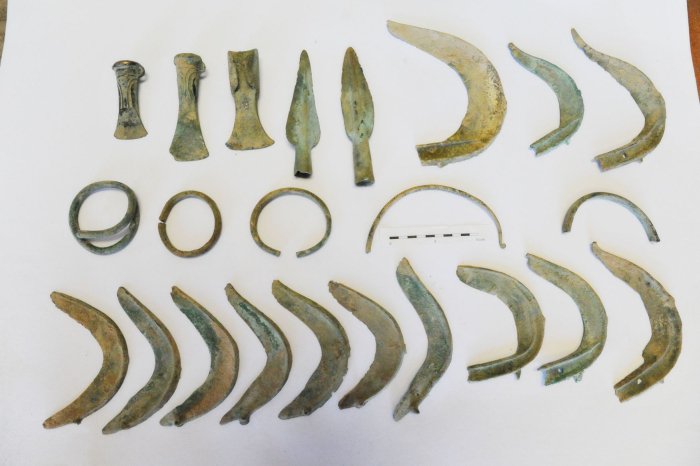 A once-in-a-lifetime discovery in Czechia was made by an unusual sort of archaeologist. A dog named Monty, on a walk with his human in March, stumbled across a cache of Bronze Age artefacts in the Orlické Mountains of northeastern Bohemia.His human – one Mr Frankota – rushed over to see what Monty had found when the dog started frantically digging. According to local news reports, what emerged from the ground was a collection of bronze objects.The discovery – since donated to the local government, the Hradec Králové Region – was a strange haul. It contained 13 sickle blades, two spear heads, three axe heads, and a number of bracelets, all forged in bronze.

Such a collection of objects found together indicates a ritual deposit, archaeologists believe.

“The fact that there are so many objects in one place is almost certainly tied to an act of honoration, most likely a sacrifice of some sorts,” archaeologist Martina Beková of the nearby Museum and Gallery of Orlické Mountains told Czech Radio.

“What particularly surprised us was that the objects were whole, because the culture that lived here at the time normally just buried fragments, often melted as well. These objects are beautiful, but the fact that they are complete and in good condition is of much more value to us.”

Beková and her colleagues have thoroughly examined the artefacts. Dating back to over 3,000 years ago, they were probably used by late Bronze Age Indo-European Urnfield culture people who used to live in the area. They would cremate their dead and inter them in urns buried in fields – hence the name.

But more evidence will need to be uncovered to determine why and how this collection of bronze objects came to be there. However, the last discovery of such significance in the region was made over 60 years ago, in 1953.

The area in which the objects were found has become one of great interest to local archaeologists, but so far their initial searches have returned nothing.

“There were some considerable changes to the surrounding terrain over the centuries, so it is possible that the deeper layers are still hiding some secrets.”

Many archaeological finds are stumbled upon by passersby or excavation works. Most governments request that, if you do happen to be so lucky, that you notify local authorities, since artefacts tend to belong to the government.

But many also offer a finder’s fee – Frankota was awarded 7,860 CZK (around US$360) for Monty’s find. (We hope Monty got some delicious dog biscuits.)

The artefacts are currently on display as part of an exhibition called Journey to the Beginning of Time in the Museum and Gallery of Orlické Mountains in the town of Rychnov until 21 October 2018.

After that, they will undergo conservation and be moved to a permanent exhibition in a museum in Kostelec.

In this article:Bronze Age artefacts, Czechia