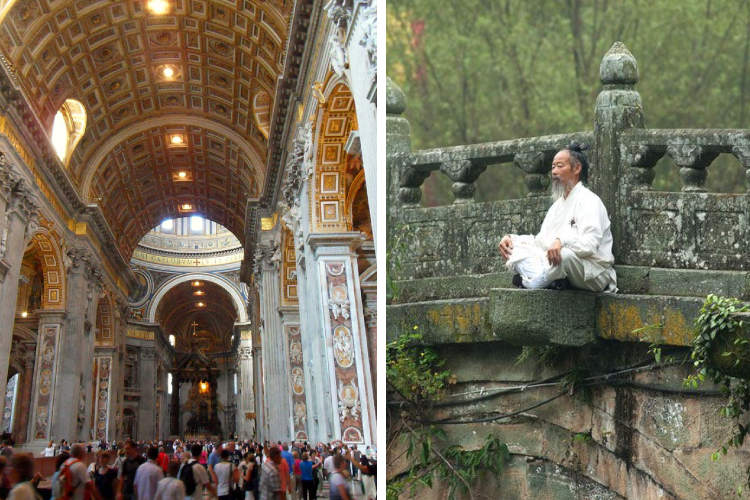 A spiritual war is upon us and the individual is challenged to maintain integrity in a sea of greed, egotism, terror and fear. With no clear path toward spiritual evolution, so many of us floundering and losing ourselves to addiction, despair and self-destruction.

When in the past ordinary religions might have served to offer a pathway toward spiritual awakening based upon the experiences of their ancient sages, today, the best they seem to offer is communal support. Far too often, though, modern religions are mired in greed, scandal, pedophilia and outright terrorism. Religions are failing to provide the help one needs to spiritually thrive in this insane world.

In a reading from the book 8,000 Years of Wisdom, Taoist Master Hua-Ching Ni talks about the state of religions today:

“Spirit can hardly be found in noisy, crowded churches and temples. Even where the teachings of the past sages have been established they have been spoiled by the insensitive trend of the times.

The spirit of the world’s religions died long ago and left most temples and churches merely empty shells.

These places continue as superficial social conventions and can only supply their devotees with shallow activities, psychological games of shadow playing, and hypnosis, all of which have absolutely nothing to do with spiritual reality.

This is the faith of today’s world, and most of their achievements are not the true answer.” ~ Taoist Master Hua Ching Ni

What then, is spiritual reality? And what does it look like in a world governed by fear, distracted by materialism, and kept in conflict by egotism? It’s really quite straightforward, says Master Ni, who refers to it as the “plain, simple truth of your life,’ which is best understood as the profoundly important concept of inner peace.

“The first spiritual goal of Taoism is the restoration and realization of one’s own well-balanced being, and then one’s spiritual evolution.

The highest goal of life is to combine oneself with the spiritual energy of the universe. There is one way to eliminate all wonder, bewilderment and confusion and that is to have inner peace.

Comparing the teachings of ordinary religions to true personal spiritual cultivation, Master Ni notes that undeveloped human beings follow and devote themselves to belief systems, deities and spiritual figureheads. In contrast, individuals seeking genuine spiritual evolution understand these systems for what they are: illusions and traps.

Often in history religious emotion has been exalted as truth itself. This gave birth to all kinds of religious prejudice and persecution. Religious mobs have carried out the mischief caused by the hot-blooded in the forceful image of a spiritual sovereign. This has not the slightest connection with spiritual reality. It is the manifestation of the impure, heavy, bloody energy of undeveloped human beings before having completed their spiritual evolution.

Many people are fooled by their own ignorance or that of others. And in their ignorance they fool others too. People like this have no hope of reaching the spiritual realm. They will have no chance to touch the real spiritual life. So, before you commit yourself to any religion, you should develop the mental ability to discern what is religious emotion and what is the spiritual truth. One is the right way to follow, and the other is only a psychological pitfall and trap. This is very important for a seeker of truth on the spiritual path.” ~ Taoist Master Hua Ching Ni

Generating this type of spiritual emotionalism has become a profitable art form. Take note of the costumes worn by Catholic Cardinals and deference to the Pope in his symbolic Mitre hat. Islamic fundamentalists and ISIS do the same when they emote fear and terror by parading captives in front of religious soldiers clad in all black robes with faces covered, armed with rifles and sabres. Using symbolic imagery as tools of dominance and control, as Master Ni points out, has absolutely nothing to do with true spiritual reality.

What would the world look like if individuals first placed their own spiritual development ahead of their desire to change the world in accordance with their beliefs about spirituality and feelings religious emotionalism? What if individuals were instead offered a plan of genuine spiritual cultivation, a path that led to actual inner peace?

“The spiritual process itself is a process of the evolution of the human spirit.” ~ Taoist Master Hua Ching Ni

This article (Taoist Master Explains the Difference Between Religion and Individual Spiritual Cultivation) was originally created and published by Waking Times and is published here under a Creative Commons license with attribution to Dylan Charles and WakingTimes.com. It may be re-posted freely with proper attribution, author bio, and this copyright statement.

In this article:belief systems, spiritual development