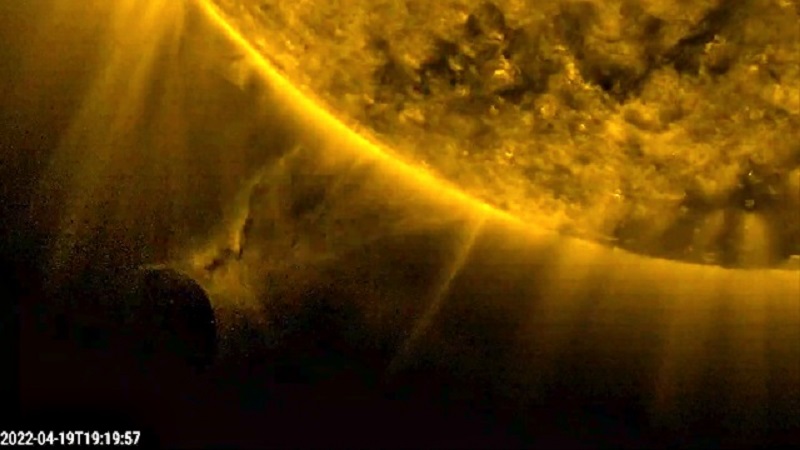 Solar observation satellites spotted a giant sphere sucking energy from our sun on April 19th. According to Scott C. Waring, when viewing data from the helioviewer.org service he discovered the following amazing astronomical phenomenon which was seen many years ago and has returned again.

It returned to the sun to replenish energy, and the unknown craft is so dark, so black, that it is almost invisible, but the sunlit plasma glows around it, revealing its location.

The return of this truly giant space object, capable of literally filling itself with solar plasma while in the immediate vicinity of the sun, once again shows what really highly developed civilizations are capable of.

The first time such a sphere was discovered in 2012, after which the video went around the world, including the pages of great scientific journals:

The last time it appeared on NASA services in October 2021:

What also attracts attention, on the eve of the appearance of the sphere in October 2021, some black triangles and cubes were flying near the Sun. It’s the same now: the black sphere appeared on April 19, and on April 17 a kind of black body loomed in the Sun’s pictures:

This is not a shooting artifact, as it might seem. The cube moved, and appeared just in the projection of the M-class solar flare on April 21st.

What happens to the Sun, we, like everyone else, do not know. Moreover – we are not even sure that we live in the real world, and not in a simulation, that the Earth is round, that the Sun is actually a star, and not some artificial lighting device dangling in orbit. But what we see for sure is some serious changes in the entire solar system.

If we look at this situation sensibly, then the Sun is not ours at all, the fact that it flies not far (by cosmic standards) from our planet and gives us life does not make it “ours”, as well as our presence on Earth – it does not automatically make it “ours”.