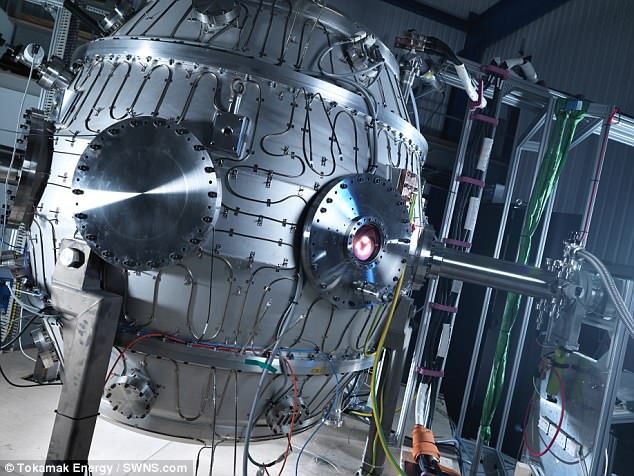 A British nuclear fusion reactor has reached temperatures hotter than the centre of the sun in a test that marks a key step toward limitless clean energy.

The Tokomak reactor hit 15 million°C (59 million °F) at a facility in Oxfordshire as part of preparations to supply the UK grid with fusion power by 2030.

Researchers at Tokomak Energy are attempting to build an affordable fusion reactor that turns hydrogen into cost-effective green energy.

With fusion energy, one tablespoon of liquid hydrogen fuel could generate as much energy as 28 tons of coal with no radioactive waste.

At this temperature – seven times hotter than the centre of the sun – the reactor will trigger nuclear fusion, a joining together of atomic nuclei that releases enormous amounts of energy.

This same process powers stars, and Tokamak Energy, based in Milton, Oxfordshire, is working to recreate it in a device called a compact spherical tokamak.

The company aims to produce industrial scale fusion energy by 2025 before its technology is integrated into Britain’s power grid.

ST40 is the third machine in a five-stage plan to achieve abundant, clean fusion energy.

‘Our business plan is built on strong scientific foundations and this major milestone provides further validation of our compact spherical tokamak route to fusion power.

In this article:green energy, ST40