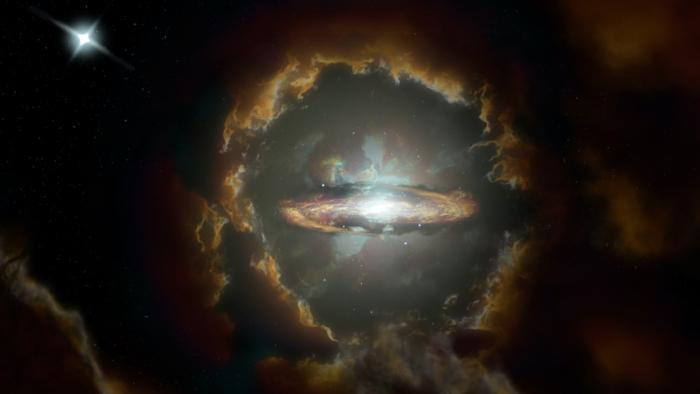 Scientists at the Institute for Astronomy of the Max Planck Society in the UK announced the discovery of the oldest massive galaxy DLA0817g, which arose just 1.5 billion years after the Big Bang. It has a disk, which can change astronomers’ ideas about the mechanisms of galaxy formation. An article by astronomers is published in the journal Nature.

Researchers discovered the galaxy using the ALMA (Atacama Large Millimeter Array) radio telescope complex. This ancient object was named Wolf Disc – in honor of the astronomer Arthur Wolf. It has become the farthest spinning-disk galaxy of all detected so far, and its cosmological redshift is 4.26.

The light from it flew 12.2 billion years, but due to the expansion of the Universe, the galaxy is currently at a distance of 24.4 billion light years. The rotation occurs at a speed of 272 kilometers per second, which is comparable to the rotation speed of the Milky Way.

According to modern models, massive galaxies are formed from the mergers of smaller mass galaxies and clusters of hot gas. These collisions prevent the formation of disks characteristic of the Universe of this age.

Therefore, the existence of the Wolf Disc will force astronomers to reconsider the mechanisms of the appearance of such space objects. DLA0817g probably accumulated cold gas, but the question of how he managed to maintain a stable disk with such a large mass remains open.