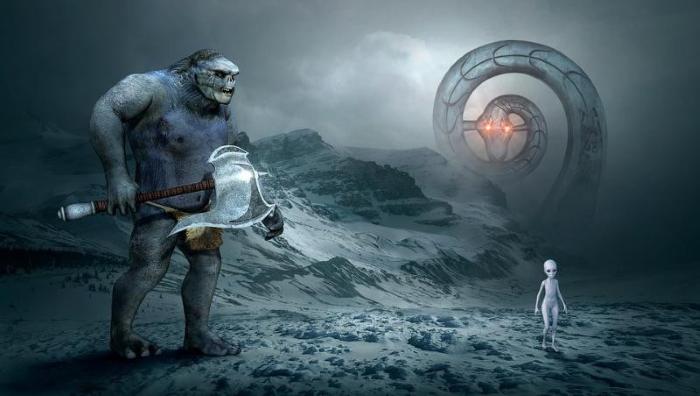 Fraudulent research centers are being created across the country.

Experts from the SETI project, aimed at searching for extraterrestrial civilizations and contacting them, have already unsuccessfully scanned more than six thousand star systems, but the hope for an early meeting with their brothers in mind remains.

It is promised that with the help of the most powerful telescope system in the Chilean Atacama Desert, the signal from an alien civilization will be detected by 2025. Now thousands of amateur astronomers are connected to this search. It is proposed to search for “techno-signatures”, which can be changes in the atmosphere of the studied planets, laser radiation. Life forms must sooner or later betray their existence.

THEY ARE ALREADY HERE!

However, “specialists” appeared in the USA who assured government officials that aliens should not be sought in the depths of outer space, but on Earth, where they supposedly have been hosting for a long time.

The command of the aircraft carrier “Nimitz”, whose pilots visually recorded an approach to the UFO in 2004, obliged the crew to ensure the safety of the vessel from unidentified flying objects whose movement on radars violates all laws of physics. The US government admits that it still has no idea what it is. But, surprisingly, every time it hires all kinds of scammers to investigate the most important phenomenon.

Today, everything related to the search for contacts with aliens in the United States falls under the highest level of secrecy, American politicians believed that they should get ahead of their competitors in contacts with advanced civilizations and be the first to receive from them means of control over the world.

Popular Mechanics Magazine attempted to study an intricate research system created in the United States for studies of obscure phenomena. It turned out that the Pentagon was heavily invested in the “Program for identifying advanced aerospace threats.” To do this, money was used from the black budget with the assistance of the Military Intelligence Agency, which avoided unnecessary debate in the Senate about the allocation of funds for such a strange program. The execution of the tasks of the military department was entrusted to one dubious private company.

With Pentagon money, this company recruited a staff of 50 employees — retired military intelligence officers, doctors of science, engineers, technicians, and managers who were entrusted with an important state task — to reveal the secret of UFOs, and at the same time to develop “breakthrough military technologies” for the Pentagon.

The program was so classified that it only became known in 2017. When it was closed, research continued under another cover.

The hunt for alien technology is based on classic American corruption, when former Senate Democratic Leader Harry Reid, with the support of two more powerful senators, knocked out $ 22 million from the military budget for an aerospace threat program.

Senator Ted Stevens stood out among a group of UFO search enthusiasts. Incidentally, he later came under investigation for receiving bribes from corporations, which, in particular, carried out costly repairs to him for free. Stevens was threatened with five years in prison, but in 2010 he died in a plane crash.

So, the dubious company, encouraged by promises of even larger investments from the Pentagon, in a short time created a secret office that took up secrets inaccessible to human cognition.

From the “researchers” was only required to submit peppy reports on the progress of research monthly.

Then Senator Reid will say that he is proud of the achievements of the program and its 38 theoretical studies. The final report fit into 490 pages full of discussions from sci-fi action films about UFOs, dark negative energy, stargates and transitions to other dimensions. It seems that company employees simply rewrote paragraphs from the works of science fiction writers, passing them off as the fruit of their efforts. Initially, it was clear that a group of retired employees of various agencies and scientific institutions were not able to deal with complex and yet inexplicable phenomena.

Officially, the office’s work ceased in 2012, but in reality, research continued with even more covert funding. In recent years, the UFO research program was led by former counterintelligence officer Luis Elizondo, who in 2017 left the Pentagon with scandal.

Financial crime and contract fraud experts say they are trying to keep their deals and programs secret in the United States to avoid disclosure and liability for forgery. The law on countering economic espionage is very suitable for this. No transparency or disclosure of obligations is permitted.

Advertisement. Scroll to continue reading.
In this article:hunt for aliens, UFO research program