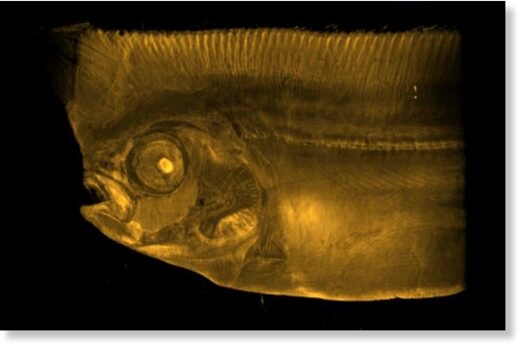 When Taku Suganuma pulled his fishing net off the coast of Imizu, he caught a catch he had never seen before. The strange fish had an unusual head and a silver body one meter long.

Suganuma, 24, caught fish on a Shintokumaru fishing boat, which sailed from Imizu when the squid fishing season was drawing to a close.

At first, he thought it was the Lowseil river fish, which is often caught on the net this season. However, a younger colleague, who knows about the species of fish, said that it could be a deep-sea North Pacific cuttlefish, aka a unicorn.

Suganuma decided to give the fish to the Wozu aquarium because of its rarity. North Pacific cuttlefish was delivered to a fishing vessel in Toyama Bay off the coast of Imizu.

According to records stored in the aquarium, North Pacific cuttlefish fish have not been seen in Toyama Prefecture for more than 30 years since one of them was found ashore at the mouth of the Katakaigawa River in Ouza in 1988. However, eight of the unicorns were either caught or hit the net from February to April last year.

The North Pacific cuttlefish is characterized by a red dorsal fin and releases black ink from its anus in response to danger.

It is believed that the fish lives in the intermediate layer at depths of 200 to 1000 meters from the coast, but details about its life remain unknown, because it is rarely caught.

Samples usually die quickly due to differences in water temperature and other factors when they are brought to the surface. Only one of the eight fish taken to the aquarium survived for about an hour.

It released a large amount of ink several times as it sailed in a large tank containing 16 tons of sea water, instantly limiting visibility to only 10 centimeters in advance.

Tomoharu Kimura, the owner of the aquarium, said the white flesh of the fish crunches like a flounder when served as sashimi, while it has a soft and simple taste.

A close look at the contents of its stomach gave a hint of life and the ecosystem of the North Pacific cuttlefish fish, as well as a threat to marine life: plastic waste.

In this article:Japan, North Pacific cuttlefish