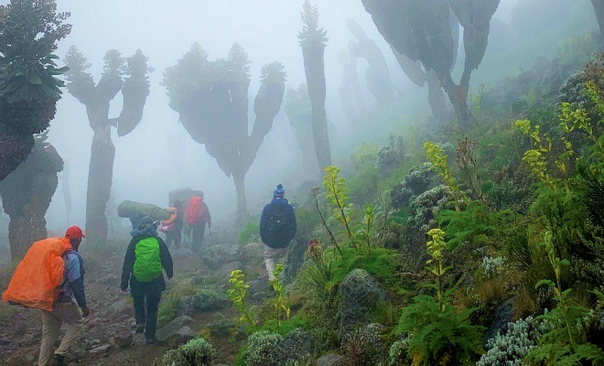 Just 300 kilometers south of the equator is the highest point in Africa, the potentially active stratovolcano Kilimanjaro, which covers an area of ​​more than 390 hectares. But as a free-standing mountain, the climatic zones of which become less and less like a terrestrial landscape as it rises, Kilimanjaro is especially notable as an incubator for isolated, mutated or rare species that are almost never found anywhere else.

Recently, on one of the slopes, scientists discovered plants of a prehistoric forest. They grew on Earth a million years ago.

Senecio kilimanjari is a giant plant. It has practically not changed over the past million years, dinosaurs once roamed in the same forests. The territory of the giant groundwort begins at an altitude of 3000 meters. There is less rainfall and therefore the prehistoric forest is not so dense. This only further emphasizes the monumentality of the giant plants standing separately from each other, capable of growing up to 5-7 meters.

To survive in such a harsh environment – high in the mountains, temperatures regularly drop below zero during the night – the plants have developed water accumulation in the core of the stem, the movement of nyctinous leaves (which means that the leaves close when the temperature drops too much), natural ‘antifreeze “And self-isolation due to wilted and dead foliage (one of the reasons terrestrial plants look so strange).

The prehistoric forest rises to about 4,300 meters. Above the slopes of Kilimanjaro, only a barren alpine desert begins, ending in a colossal glacier at the very top of the stratovolcano.

In this article:Kilimanjaro, prehistoric forest