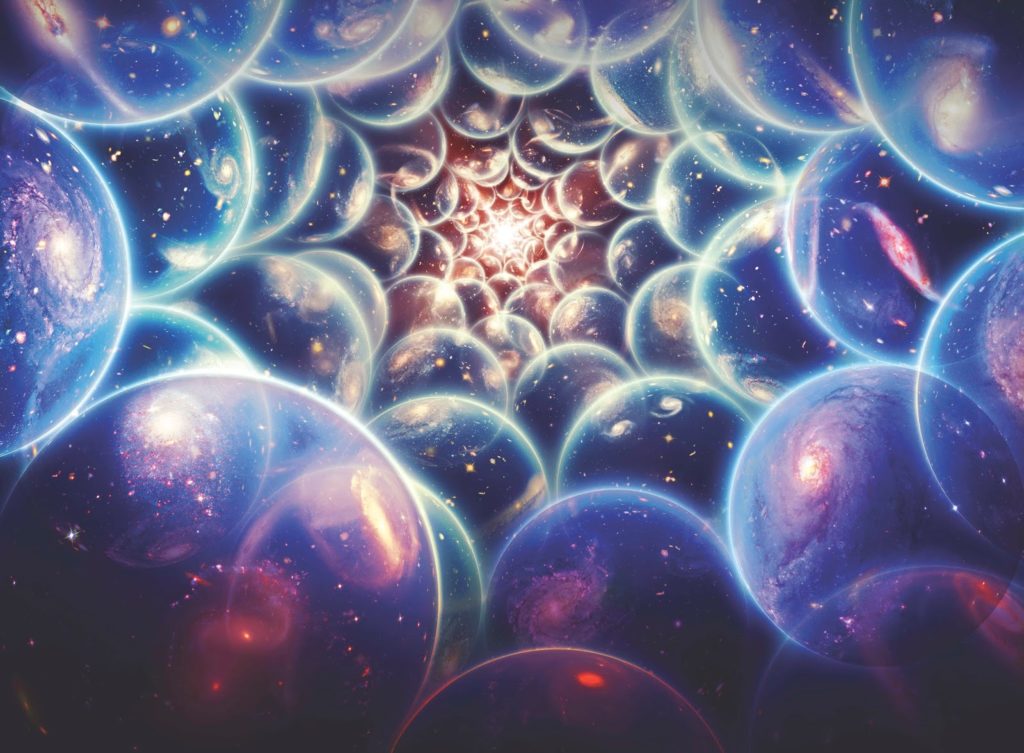 If you’re someone who believes in synchronicity, then this research is for you. In a big way. Make that a BIG way. To illustrate what a big deal this is in the scientific community, the researchers take the rarely-seen stance of using the word “mysterious” in the title of their paper. Hey, that’s OUR word!

“For this mysterious coherence in large scales, we cautiously suggest a scenario in which it results from a possible relationship between the long-term motion of a large-scale structure and the rotations of galaxies in it.”

There’s that word again, this time in the abstract of “Mysterious Coherence in Several-megaparsec Scales between Galaxy Rotation and Neighbor Motion,” published recently in the Astrophysical Journal. The research was led by astronomer Hyeop Lee at the Korea Astronomy and Space Science Institute, South Korea’s national research institute in astronomy and space science. However, the key phrase in the abstract is “large-scale structure.”

“The observed coherence must have some relationship with large-scale structures, because it is impossible that the galaxies separated by six megaparsecs [roughly 20 million light years] directly interact with each other.”

In an interview with Vice.com, Lee explains the team’s research – a study of 445 galaxies within 400 million light years of Earth – and their “mysterious” observed synchronicity where many of the ones rotating in a direction toward Earth had neighbors that were moving toward Earth, and vice-versa. There’s no known way galaxies 20 million light years apart can exert that kind of gravitational force upon each other, so the team attempted to model a dark energy or dark matter force that could link them. The answer? Large-scale structures. Here’s a definition from the Harvard and Smithsonian Center for Astrophysics:

“Up until the latter part of the 20th Century astronomers thought, in the words of the eminent astronomer Edwin Hubble, that the universe was “sensibly uniform.” As a result of redshift surveys of large samples of galaxies we now know that the galaxies around us are distributed in an incredible tapestry of filamentary and sheet-like structures called the cosmic web. Massive clusters of galaxies lie at major “intersections” in this web. Galaxies like our own Milky Way are usually found in groups which often lie on the outskirts of clusters or superclusters. The first really large structure, the Great Wall, was discovered by CfA astronomers in the late 1980’s and is approximately 300 million light-years across.”

A cosmic web of galaxies connected by “an incredible tapestry of filamentary and sheet-like structures.” (Let’s pause here for a moment to ponder: Which came first: the planetarium or psychedelics? Asking for a friend.) Lee told Vice.com that the “mysterious coherence” the team observed was very slowly rotating in a counter-clockwise direction. Vice.com points out that this is the latest of similar studies reaching similar conclusions about large-scale structures. In a 2014 study led by Damien Hutsemékers, an astronomer at the University of Liège in Belgium, and published in the journal Astronomy & Astrophysics, the Very Large Telescope (VLT) in Chile was used to study nearly 100 quasars and the results revealed that the rotation axes of 19 quasars in this group were parallel, despite being several billion (that’s billion with a B) light years apart.

“Galaxy spin axes are known to align with large-scale structures such as cosmic filaments but this occurs on smaller scales. However, there is currently no explanation why the axes of quasars are aligned with the axis of the large group in which they are embedded.”

The evidence points to the existence of large-scale structures keeping the galaxies of the universe connected and spinning in synchronicity. The explanation obviously needs more study before it’s accepted, but it’s worth pondering – with or without the aid of psychedelics.

One more thing to ponder … Axes of Quasars would make a great name for a Pink Floyd tribute band.