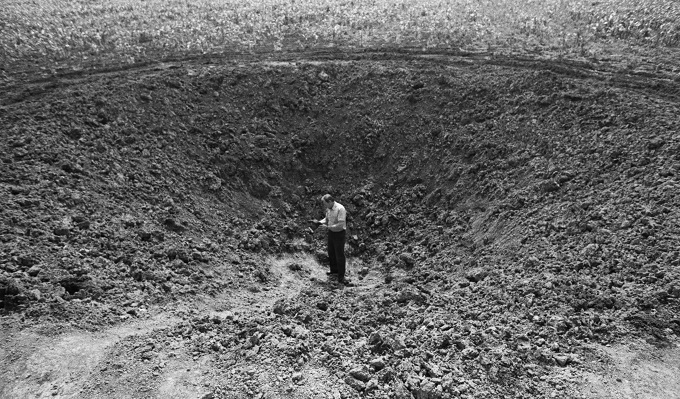 Recently, 700 classified CIA documents were published simultaneously, which describe cases of observation of strange objects in the sky only observation (!). In them, among other things, they write about a strange case with a UFO in Russia that seems to be related to the explosion in Beirut a few months ago, and they allegedly said that the explosion was caused by large amounts of ammonia nitrate, ie fertilizers stored in port while nowhere in history has such an explosion been allegedly caused by fertilizers.

Black Vault site owner John Greenwald Jr. He said it took a lot of effort to persuade the CIA to declassify the UFO documents by sending thousands of requests to the agency under the Freedom of Information Act.

A case in Russia mentioned in these documents is related to the mysterious explosion in Sasovo, Russia in 1991. The strange explosion occurred in this city at night, shaking even large buildings.

The small town of Sasovo is located about 300 kilometers southeast of Moscow. At 1.34 a.m. on April 12, 1991, half a mile from the southwestern outskirts of the city, a huge explosion was heard. Many government buildings and private homes were blown up by the shockwave, windows were shattered and fragments were thrown as far as thirty kilometers away, reaching the town of Chuykovo.

At the site of the explosion, a huge crater was created with a diameter of about 28 meters and a depth of 3 to 4 meters. In the middle of the crater there was a large bulge of soil 3.5 meters in diameter. Huge chunks of icy soil were scattered around the crater up to two hundred meters away.

The magnitude of the explosion was so strong that the frozen pieces were thrown to a huge height in the air, and fell and were nailed deep into the ground. According to experts who carefully examined the incident, they pointed out that 25 tons of explosives would be needed to create this effect.

Military experts, such as Colonel Prodan and fire chief Matveyev, with extensive experience in similar incidents, said that in their view, the explosion in Sasovo was unusual. They used it as an argument for this view, that there was a total absence of chemicals that are always found after an ordinary explosion. Also the earthen lump in the middle of the crater is not something that is found in such cases. Even the way the shockwave propagated did not match a “standard” explosion.

The newspaper Komsomolskaia Pravda, proceeded to cite some testimonies about the incident but without commenting and drawing conclusions. From the testimonies it emerged:

The Russian government attributed the explosion to a large amount of ammonia nitrate in a report, military experts categorically ruled out this version.

The official version spoke of an accidental explosion of ammonium nitrate fertilizers, but many people insisted that before the explosion, they saw a strange “moving fireball” in the sky and were sure it was a UFO.

It’s a similar story to the explosion in Beirut: The FBI did not officially determine the cause – It is estimated that it was caused by an accident .. Two US government sources, who have learned about the official report and analysis of the circumstances of the explosion, said that the US services are also very convinced that the explosion caused by large quantities of ammonium nitrate, which was stored in a port building for years, was due to an accident.

Another incident of declassified records is a story that took place in January 1985, when the crew of a passenger plane en route from Rostov to Tallinn saw a strange object in the sky. The pilot who first spotted him at the beginning looked like an unusual star.

But suddenly a thin ray of light came out of this “star” and fell perpendicular to the ground, the ray of light splitting in two. All four people in the cockpit watched in surprise as two cones of light from the object fell on a white spot in the sky. While one pilot was wondering if he would report what they see in the control tower, at the risk of being considered insane. Suddenly, the white spot turned into a huge green cloud and then the pilot was forced to deviate from the course of the plane, because this object began to approach the plane at high speed at an angle.

After that, the crew contacted the air traffic controller at the nearest airport, it was Minsk Airport, and told them that they did not see anything unusual on their radars. However, the green cloud, meanwhile, began to follow the plane, “as if it were attached to it.” From inside the cloud, small lights shone, “like the lights of a Christmas tree.”

The green cloud flew around the plane and one pilot shouted “Look, he’s imitating us!” as the “cloud” took the shape of a wingless plane. The cloud began to shine with yellow and green light. When the passengers of the plane were worried, the pilot told them that it was North Sela. It is reported that this cloud was seen by a pilot of another Tu-134 plane that flew in the same area,

In November 1955, one of the passengers on a train suddenly announced that he had seen a UFO in the sky. When he told the other passengers the lights went out and then they could see a “shadow” on the horizon in the sky. The shape of the object was not clear in the dark sky, but it looked like a half balloon with a small canopy at the top.

The object was slowly rising vertically from the ground. At the top of its dome, a bright white light could be seen, and a pinkish-white glow along the perimeter of the “sphere”. The object was “like a small plane” in size and was about 3 km from the train. Suddenly, the passengers saw that the UFO stopped going up and suddenly moved in their direction, flying at high speed over the train and disappeared.