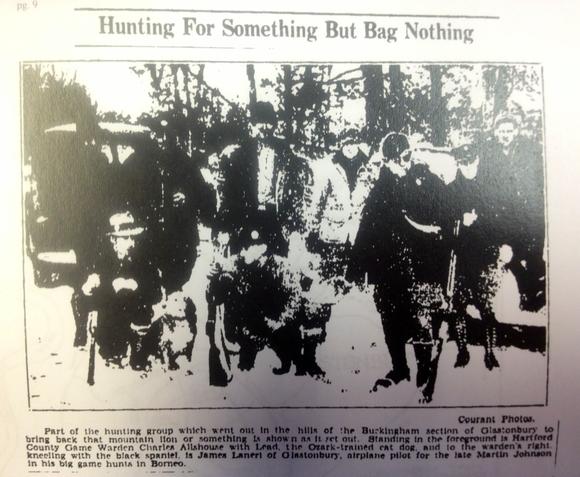 Tales of the “Glawackus” filled the newspaper in 1939

It was a creature that let out “blood curdling yells at night.” It was described as witnesses who saw it as a large dog with a cat-like face. Small dogs disappeared or were found mutilated along with goats and sheep.

And so the legend of the “Glastonbury Glawackus” began.

It was the middle of a cold, snowy winter in 1939 when The Hartford Courant ran a story of a hunting party that went into the wilds of Glastonbury in search of the creature. It was a headline writer’s dream as the newspaper’s front page read: “Guffaws of Glastonbury Glawackus Greet Gloomy Gang Of Gunners.” The search party turned up nothing.

“The Glawackus was still loose in the snow-covered hills of Glastonbury Tuesday night, victor over the wiles of the best huntsmen in these parts,” read the January 18, 1939 article. “Until they’re sure, the scientific term Glawackus will be used. The name come from Glastonbury, its habitat, and from wacky, to describe the way everyone feels about the whole thing. The ending makes it sound Latin and authentic.”

The Courant printed a map showing the area of the three big Glawackus hunts and pinpointing bits of “Glawackiana” – areas where dogs and other domestic animals killed or mauled; areas Glawackus heard howling; areas where Glawackus was seen and “dogs chased something” locations.

The sightings and hunts were confined to the wilderness portion of southern and eastern parts of town. Some believed the creature was a mountain lion that escaped from a Manchester, Vermont zoo after the great hurricane of 1938.

“Because the animal is out of its native habitat, the animal is probably restless,” warden Charles Allshouse said. “and might move on and be reported some distance away in a short time. However, it will probably stay around as long as there are enough rabbits to meet the needs of a mountain lion’s appetite.”

Others thought the creature may be a lynx.

“I never saw a glawackus,” said a New Britain policeman in a Jan. 23 article. “but I’ll bet that animal over there in Glastonbury isn’t one. I’ll bet it’s a lynx. Four years ago there were two lynx off here in the Pinnacle Mountains. They were mates and nobody caught or killed them. They can have a whole family around these parts by now.”

The lone hunter to see the creature was Hartfordite William F. Bonvouloir in the wilderness near Diamond Lake when a “beautiful black creature about three feet long with a tail two feet long leap out of the scrubwood in front of them.”

“Bonvouloir brought up his shotgun and cut loose with the right barrel,” according to the Courant article. “The 12-gauge charge bit into a rotted tree stump as the startled cat began zipzagging through the underbrush.” A second shot misfired as the cat “kicked back sprays of snow as it fled into a stretch of green cedars.”

But once a legend is born, it was hard to resist the pull of a myth. There was a community dance called the Glawackus Ball. An article ran about children making a Glawackus-man in the snow. Hunting clubs made Glawackus targets for members to shoot. Even local poets were inspired.

Or wildcat, where is he?

Now hiding in a tree.

But if the great safari

Its big game could not stalk,

Through wood and open landscape,

It had a lovely walk.”

The fervor began to die down when a large brown dog was killed in July by hunters. The headline from July 7, 1939 read “Mysterious Glawackus Is No More.” The dog was taken in a baited bear trap, shot and buried in an unmarked grave.

“In a few days the beast was caught and bullets ended its suffering,” read the article. “A few persons witnessed the incident and they decided to bury the animal and say no more about it.”

“After that, Glawackus was seen no more and, one by one,” read a 1958 article marking the 20th anniversary, “Glawackus men admitted that the dog probably was the terrible monster – well, maybe, perhaps. Still others waited until Middletown farmers one night reported seeing a “strange beast passing through. That, they said, must have been him.”

The bottom line? The legend of the Glawackus sold newspapers and brought some excitement to a sleepy town during a long winter.

“It relieved the monotony of a dreary winter,” a July 8 editorial noted. “It provided small talk for uncounted dinner tables just as the subject of the hurricane began to pall. It got any number of ordinarily slothful individuals into the open air…Now it is dead, but if one knows Glastonbury, it will rise again. It was too useful to remain long buried.”