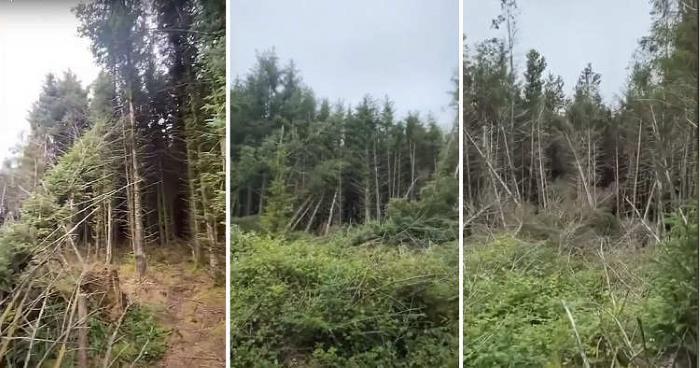 Having gone on a forest trip not far from home, this Briton could not even imagine that he would stumble upon a place that resembled an anomalous zone from the X-Files series.

A resident of Plymouth, England, Ben Landricomb on Monday June 13 was in a tourist camp near the village of Meddon, near Bideford, County Devon. At some point, he decided to go for a walk in the forest with his dog.

At about 4 pm Ben came upon a very strange place in the forest, which was littered with tree trunks, as if they were bent to the ground, and then some very powerful force broke it.

The strangest thing was when Ben discovered that the tops of many trees had been broken off. Then he thought that maybe in this place he made an unplanned landing of a UFO. Moreover, when Ben started filming this place on his phone, he felt as if someone was looking at him, and then he heard very strange sounds, as if some creature screamed loudly. This was enough for Ben and his dog to run away from this place, trying to quickly return to their tourist camp.

According to Ben, it was a very eerie place and it became even more scary when he heard loud noises that sounded like screams.

The nature reserve in the area of ​​Meddon is known as a great place for tourism, deforestation is not carried out here and the inhabitants of the village of Meddon receive many tourists every year. At the moment, the local city council is trying to understand what exactly Ben Landricombe photographed in the forest. Ben himself flatly found himself back there.