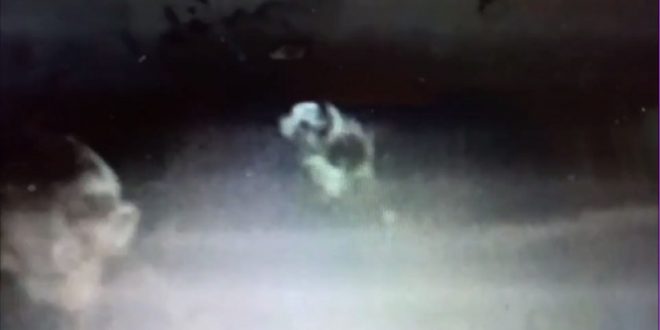 An apparition has been captured on CCTV at the The Dolphin pub in Sussex UK. The Pub dates back to 1735 and is said to be one of the most haunting buildings in England. A friend of landlady Ellie Boiling felt something brush past him while he was in the bar upstairs so he asked her to check the cameras to see if they had recorded anything.

He first thought it could have been a dog but when they checked the footage they noticed a glowing shape behind him which appeared to look like an impish creature.

Ellie said ” I was flabbergasted. My gasp has never been so flabbered. As a ghost-hunter I was excited, because I thought I have found something here” The CCTV appears to show a strange shape behind a drinker in the pub (Image: Credit: Pen News/Ellie Boiling)

A group practicing parascience, the scientific study of supernatural phenomena, visited the pub to see if they could recreate the form found on the tape.

They believed that the shape was actually just the lights from a band performing in the pub on the night.

Ellie has her doubts though, she said “It would be a poor light show if it was just one light.” Little Dolly is one of the many ghosts Ellie says is seen around the haunted rooms(Image: Credit: Pen News/Ellie Boiling)

Some people have claimed that the footage is fake, but Ellie says she does not have the ability to superimpose the image onto tape as she knows nothing about technical stuff.

What do you think?

In this article:Britain’s most haunted pubs, The Dolphin pub