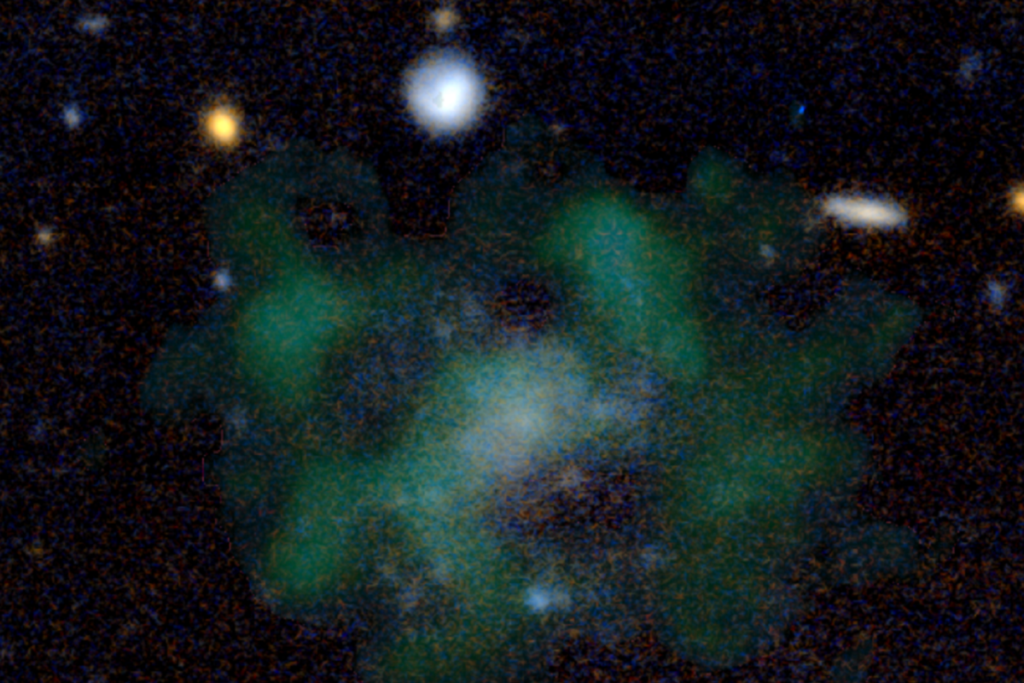 An international group of astronomers has discovered an impossible galaxy from the point of view of modern science. The AGC 114905 is completely devoid of dark matter, which makes it difficult to explain its appearance using existing cosmological theories.

The prevailing idea in the scientific world is that all galaxies, including ultradiffuse dwarf galaxies, can only exist if they are held together by dark matter. But data on gas rotation in AGC 114905 over 40 hours of observations from July to October 2020 with the Very Large Array telescope in New Mexico, USA, again questioned this theory.

AGC is found in the constellation Pisces. It is located about 250 million light-years from Earth and is about the size of the Milky Way. Moreover, it has a thousand times fewer stars: that is, it takes up as much space in space as our galaxy, but its stellar mass is much less.

For 40 hours in a row, astronomers watched the rotation of gas clusters in this galaxy – they moved only under the influence of ordinary matter. Dark matter should be found in any galaxies, but AGC is beyond the scope of current theories.

They then plotted a graph that measured the distance of the gas clouds from the galactic center on the X-axis and the gas rotation speed along the Y-axis. This is the standard way to detect “missing” dark matter that cannot be seen with telescopes. But the graph showed that the movement of gas in AGC 114905 is completely dependent on ordinary visible matter.

“The problem is that the theory suggests that there must be dark matter in AGC 114905, but our observations say that it is not. In fact, the difference between theory and observation has only increased.”Pavel Mancera Piña, researcher at the Netherlands University of Groningen.

Scientists have put forward several hypotheses to explain the results. For example, AGC 114905 may have been stripped of dark matter by large nearby galaxies.

“But they are not. And in the most famous structure of galaxy formation, the so-called cold dark matter model, we would have to introduce extreme values ​​of parameters that go far beyond the usual range. Also, with modified Newtonian dynamics, an alternative to the theory of cold dark matter, we cannot reproduce the movement of gas inside the galaxy, Pavel Piña, an astronomer at the University of Groningen, told reporters”.

“Theories that admit the existence of dark matter, in principle, cannot explain the existence of this galaxy without using extremely unrealistic parameters. In turn, their alternatives, including modified Newtonian dynamics, cannot correctly describe the nature of the gas movement in AGC 114905, – Piña noted”.

In 2018, astronomers examined the super-scattered galaxy NGC 1052-DF2 in the constellation Cetus, which is comparable in size to the Milky Way, but there are half the number of stars. The speed of rotation around the center showed that there is almost no dark matter in it. In 2021, another study of the same galaxy, made using the Hubble telescope, was published. It confirmed that NGC 1052-DF2 is missing a significant amount of dark matter.

In 2019, a second galaxy with similar properties was discovered – NGC 1052-DF4. Scientists have suggested the existence of a whole class of such celestial objects.

Perhaps, galaxies without dark matter will help scientists better understand the structure of the cosmos. Modern cosmological theories clearly do not take into account all the details.


Advertisement. Scroll to continue reading.
In this article:Dark matter, universe